The United States of America is commonly known as the United States or simply “America”. It is a federal republic that is well-known to be composed of 50 states, a federal district, five major self-governing territories and many different possessions. The United States is the world's third- or fourth-largest country by its total area as well as the third-most populous. Its capital is Washington, D.C. The largest city by population in the USA is New York City.

Both the capital's federal district and the forty-eight states are contiguous being located in North America between Mexico and Canada. The state of Alaska is in the north-west corner of North America, bordered by Canada to the east and across the Bering Strait from Russia to the west.

All the US territories are known to be scattered about the Pacific Ocean and the Caribbean Sea. The extremely diverse geography, wildlife, and climate of the United States make this country one of the world's 17 megadiverse countries.

The economy of the USA is the dynamically developing in the Americas. It is largely post-industrial being characterized by the dominance of the knowledge-based activities and services. Its population is only 4,3% of the world in total but the USA holds 33,4% of the total wealth in the world. The United States of America ranks among the highest nations in a few measures of economic performance, including human development, per capita GDP, productivity per person and average wage.

The USA Maps solution can be used as an additional tool to the ConceptDraw DIAGRAM diagramming and drawing software. Each of the pre-made maps that are available to be taken from this solution is scaled. The USA Maps solution allows using the option of adding further details such as county’s borders, states’ names, their capitals as well as major cities that can be either shown or hidden by using the action menu for each of the state maps.

Enhancing the ConceptDraw DIAGRAM diagramming and drawing application’s possibilities by providing all the ConceptDraw DIAGRAM users with the vector stencil graphics maps that represent all the 50 states of the USA, the USA Maps solution may be useful for all those who have an international business working with people or providing other countries products from the USA, as well as making purchases to supply those who live in the US with.

There are 9 libraries containing 52 vector objects in the U.S.A. Maps solution. 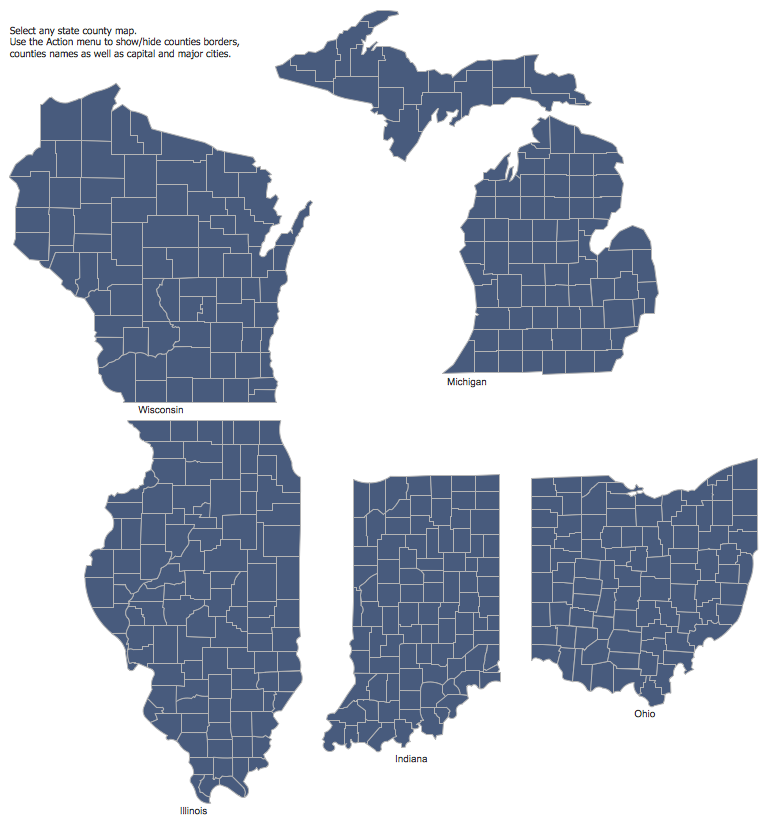 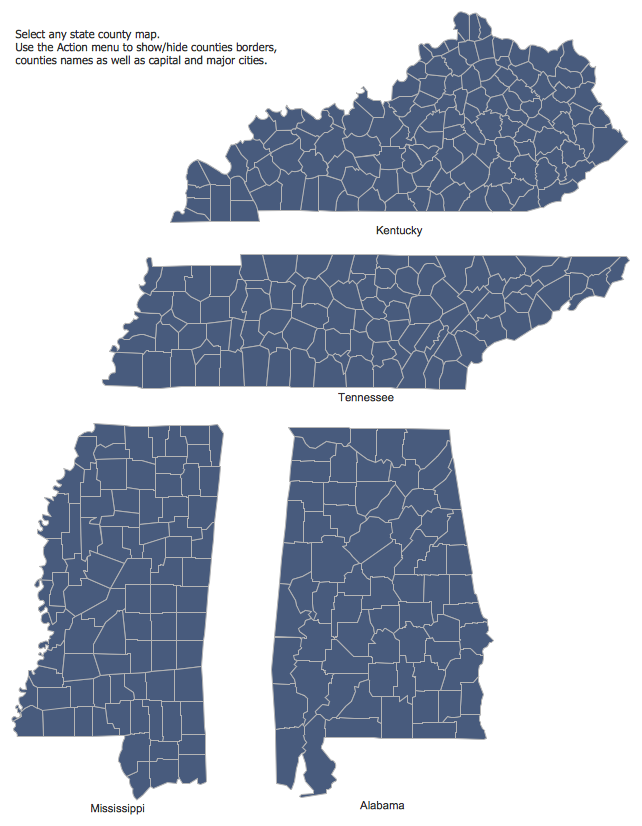 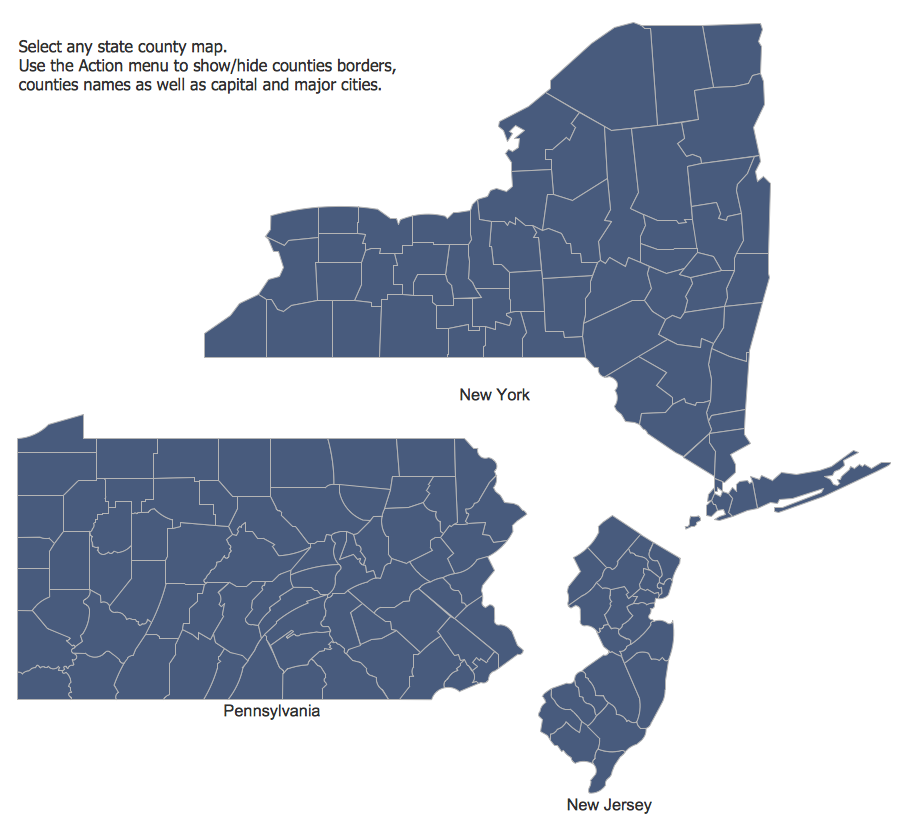 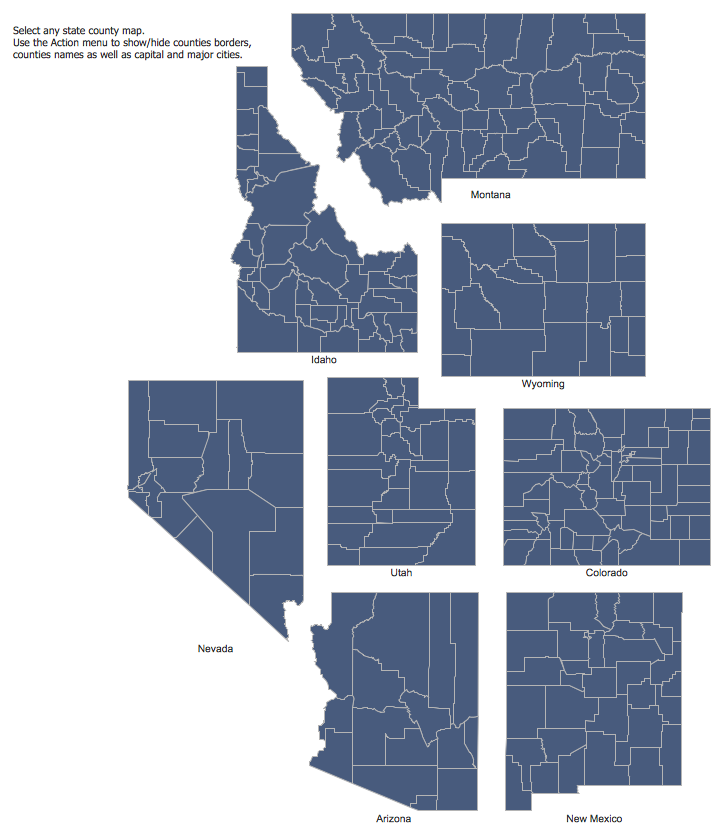 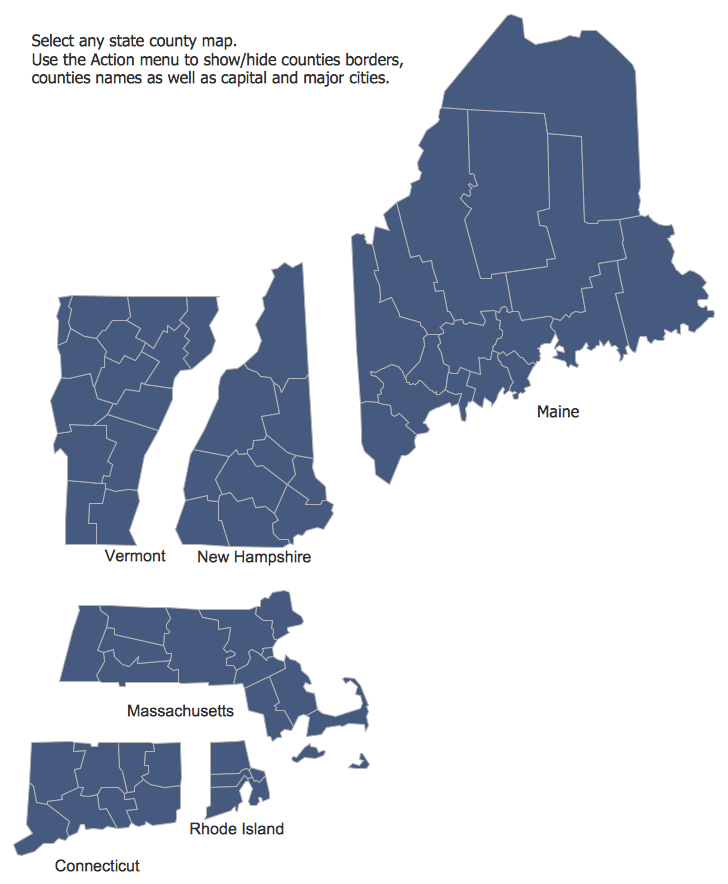 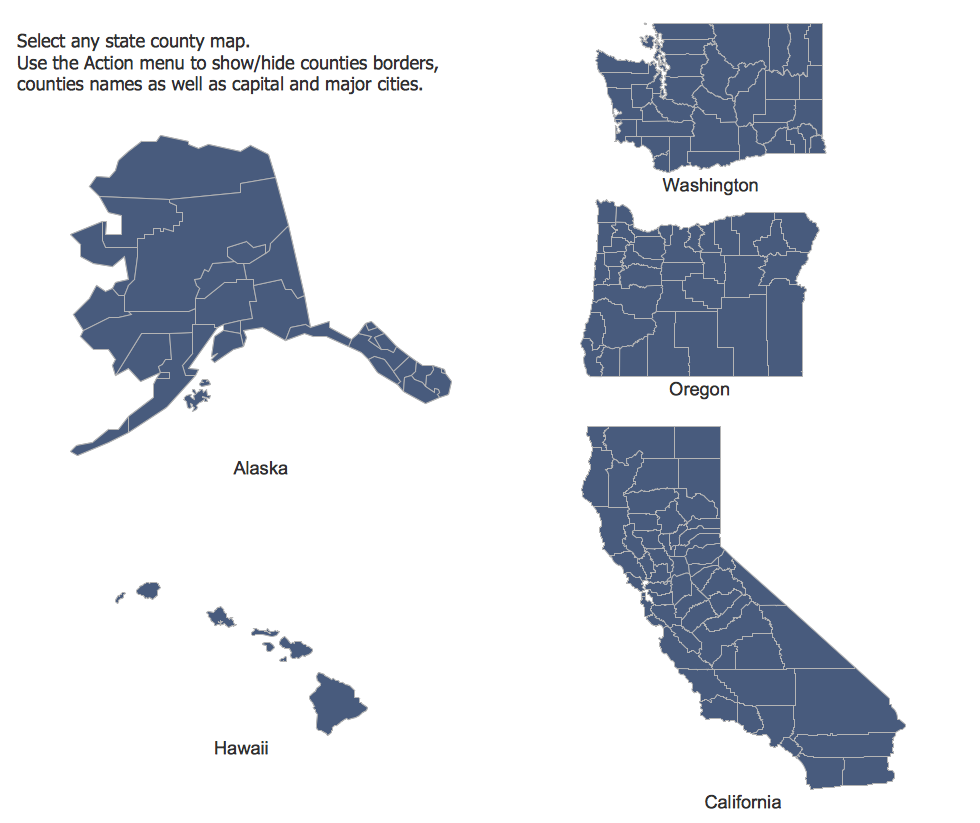 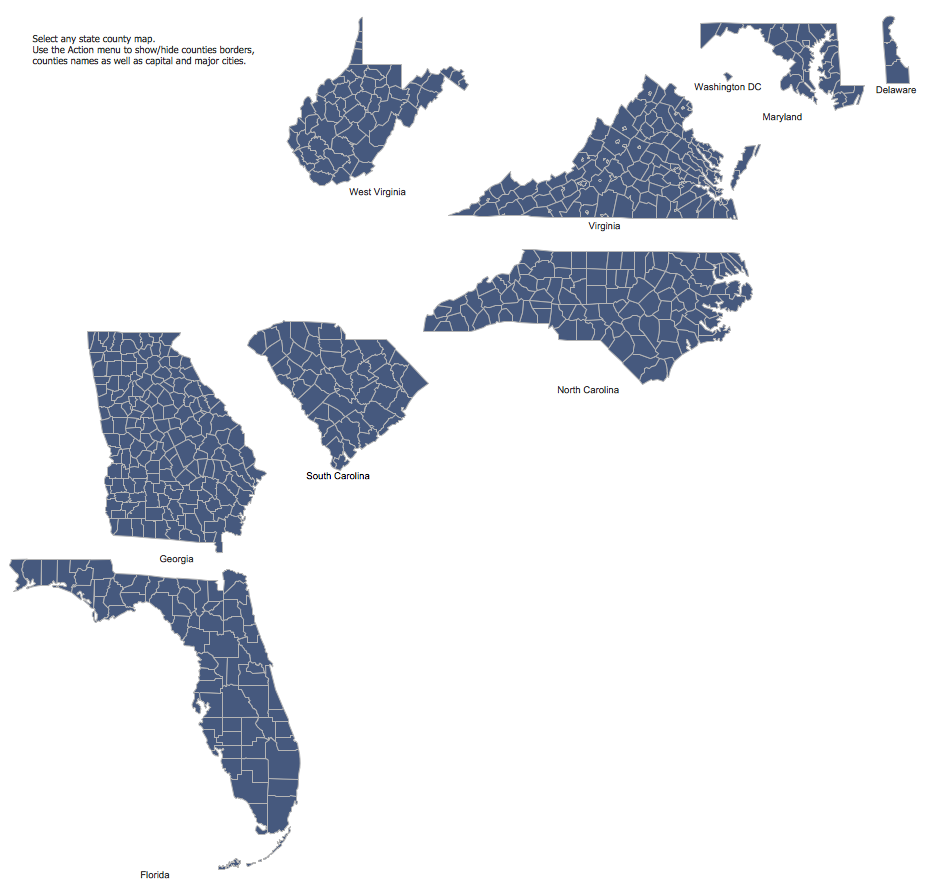 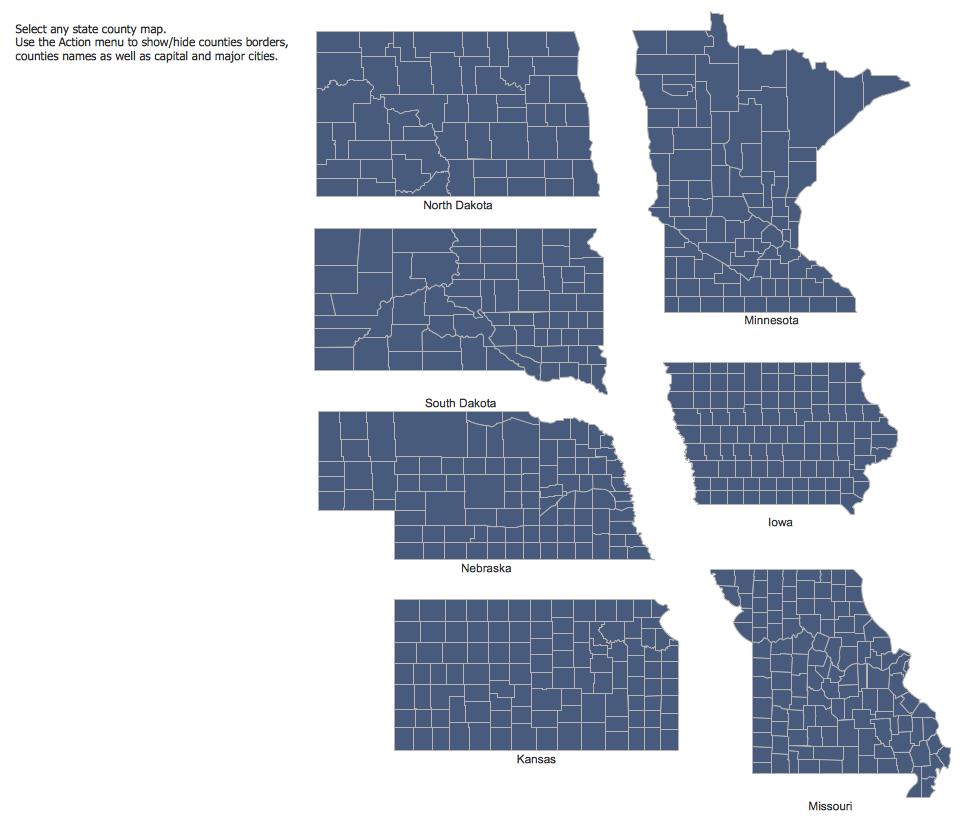 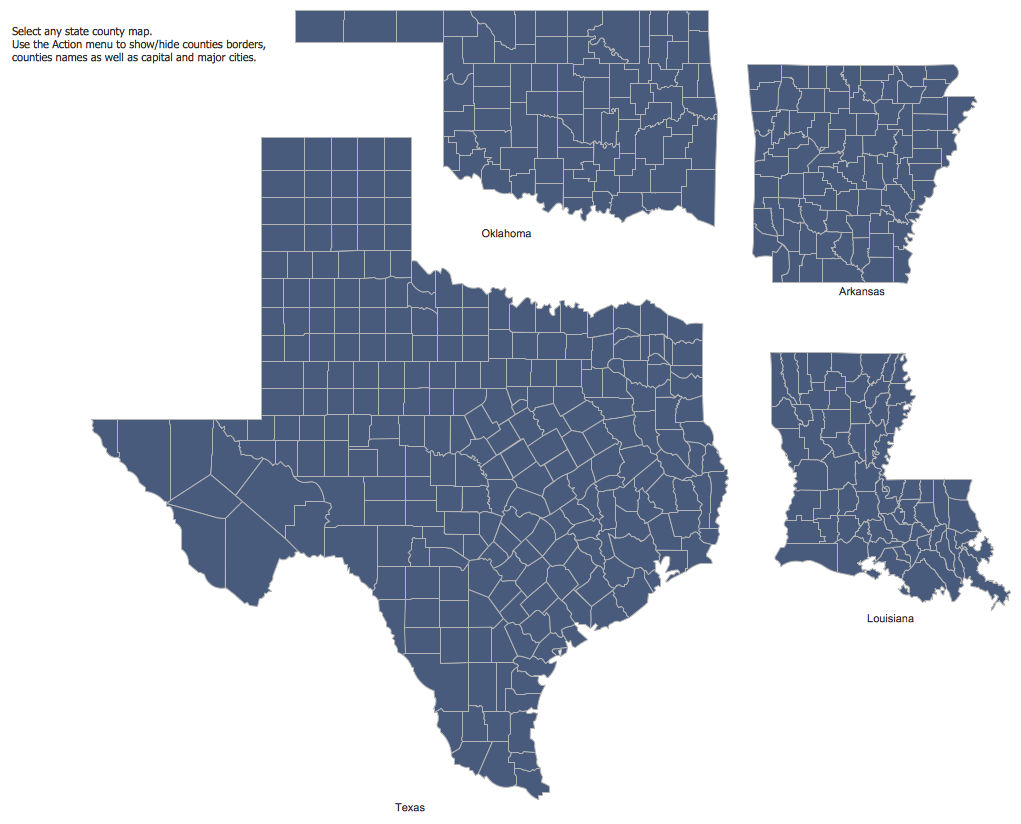 There are a few samples that you see on this page which were created in the ConceptDraw DIAGRAM application by using the USA Maps solution. Some of the solution's capabilities as well as the professional results which you can achieve are all demonstrated here on this page.

This diagram was created in ConceptDraw DIAGRAM using the Pacific States library from the U.S.A. Maps solution. An experienced user spent 15 minutes creating this sample.

In this sample the user has added the option of marking out the county borders in the state of California, and marking them with their federally issued county code. Also notice that each county area can be shaded with a different hue or colour. 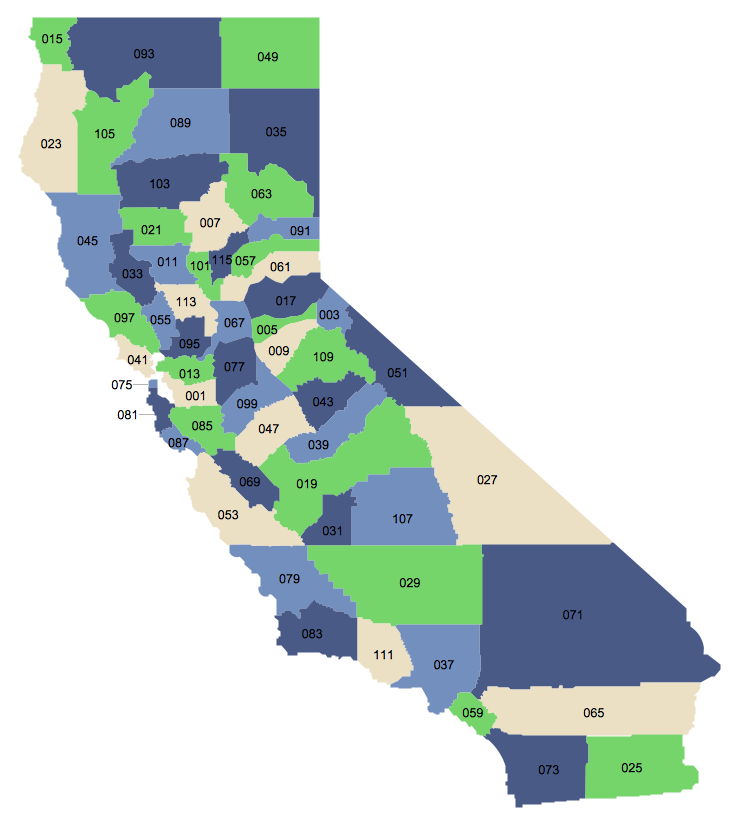 This diagram was created in ConceptDraw DIAGRAM using the Mid-Atlantic States library from the U.S.A. Maps solution. An experienced user spent 5 minutes creating this sample.

This is the effect of adding extra layers of detail, controlled by the action menu assigned to each map. Here the state of Pennsylvania is shown with its county borders and their names, as well as the state capital of Harrisburg and other large cities. 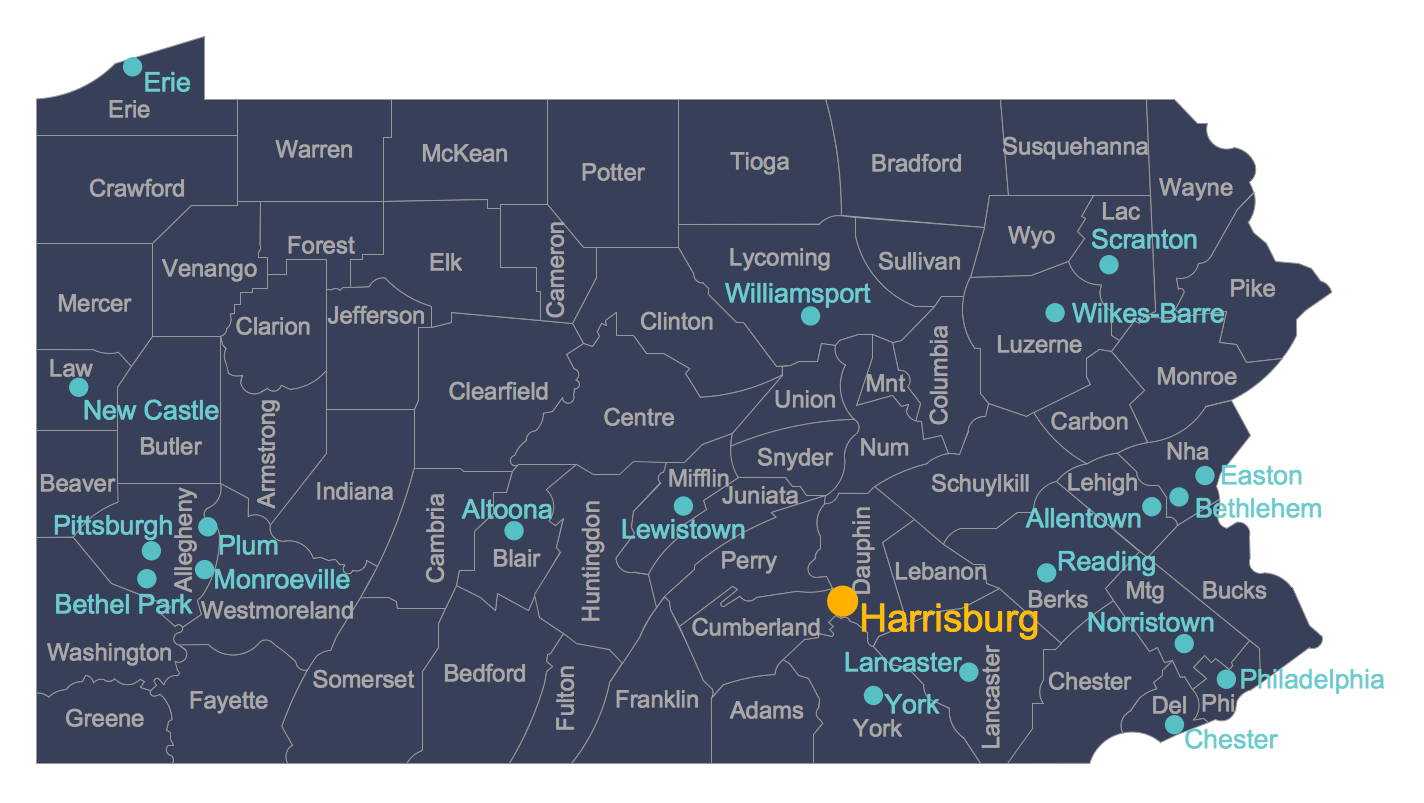 This diagram was created in ConceptDraw DIAGRAM using the Mountain States library from the U.S.A. Maps solution. An experienced user spent 15 minutes creating this sample.

An example of the kind of thematic map it is possible to create using the U.S. state maps provided with the solution. Values of data can be assigned to different hues; the normal method is to use darker shades for denser/larger values of data. 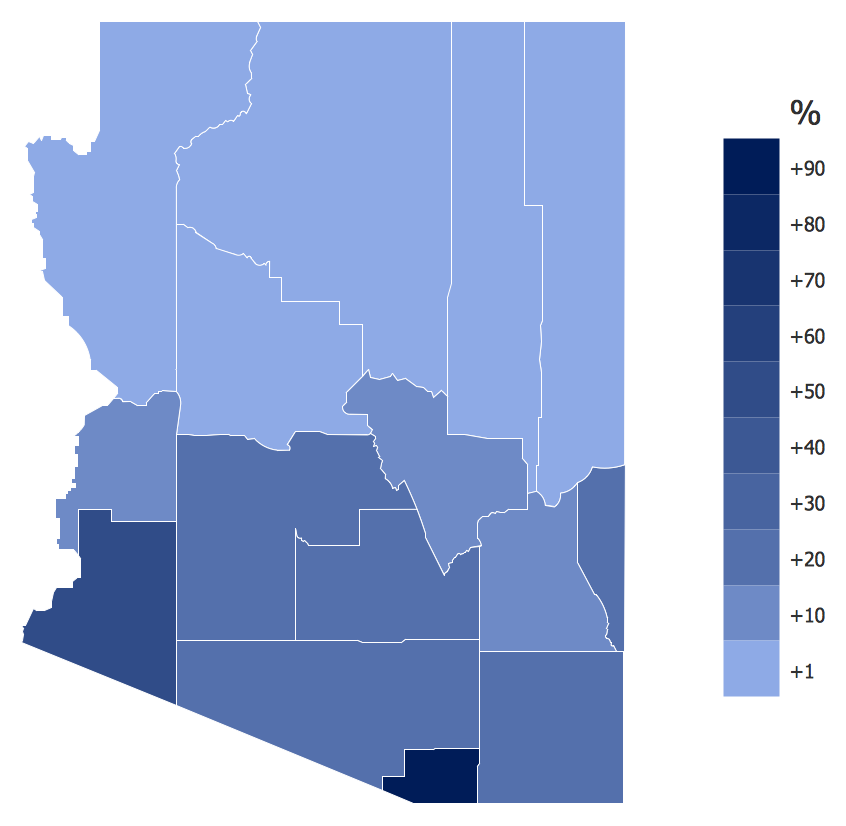 Example 4: Population of Florida by County

This diagram was created in ConceptDraw DIAGRAM using the South Atlantic States library from the U.S.A. Maps solution. An experienced user spent 15 minutes creating this sample.

Presenting data using this visual technique allows the viewer to establish pattern in results. A quick look at this population map shows the trend for more people to reside in the south, around the beaches and large cities like Miami. 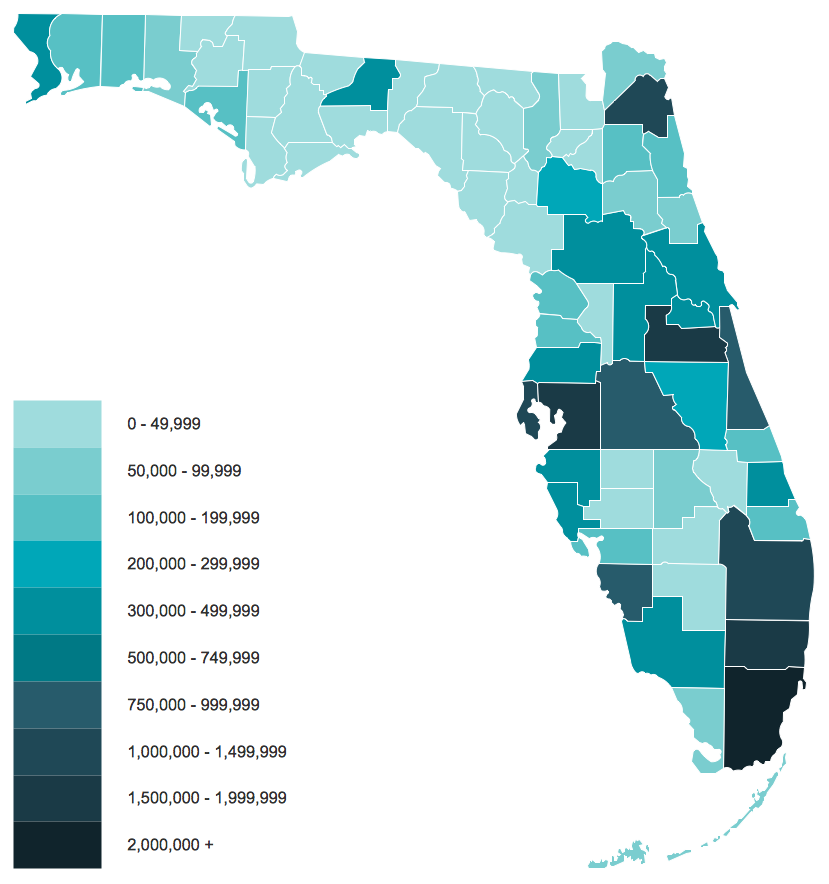 Another choropleth style of thematic map, showing the distribution of votes for the U.S. Senator from Illinois. Different shading makes it possible to add the detail of not just who scored the votes, but what percentage of the ballot they received. 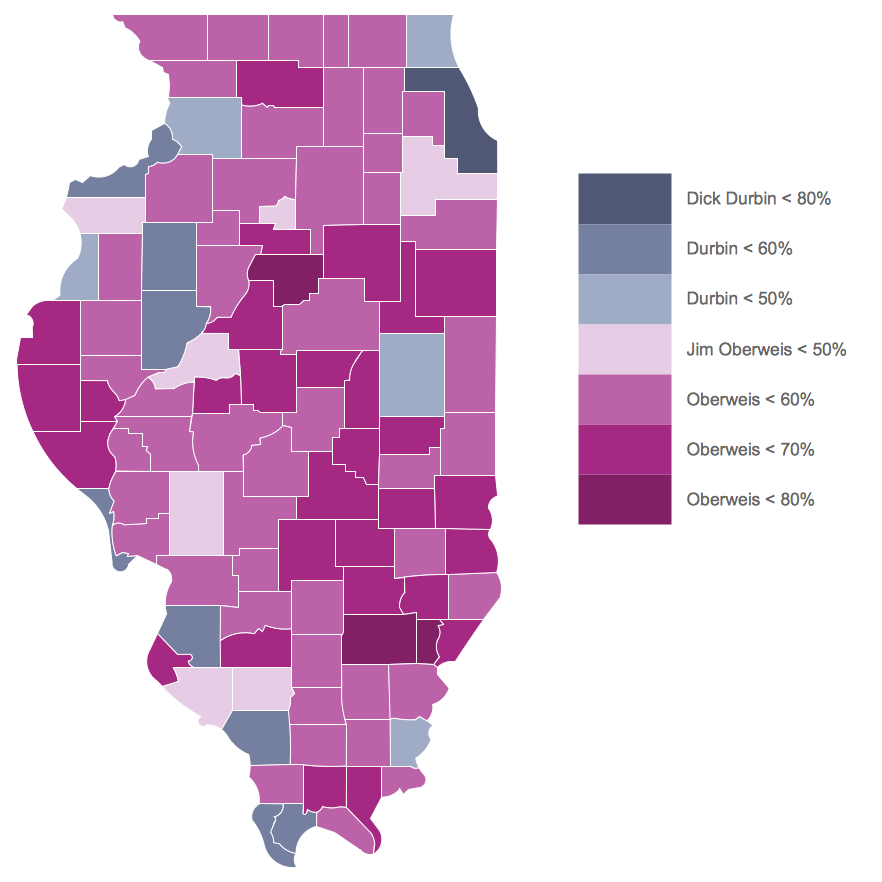 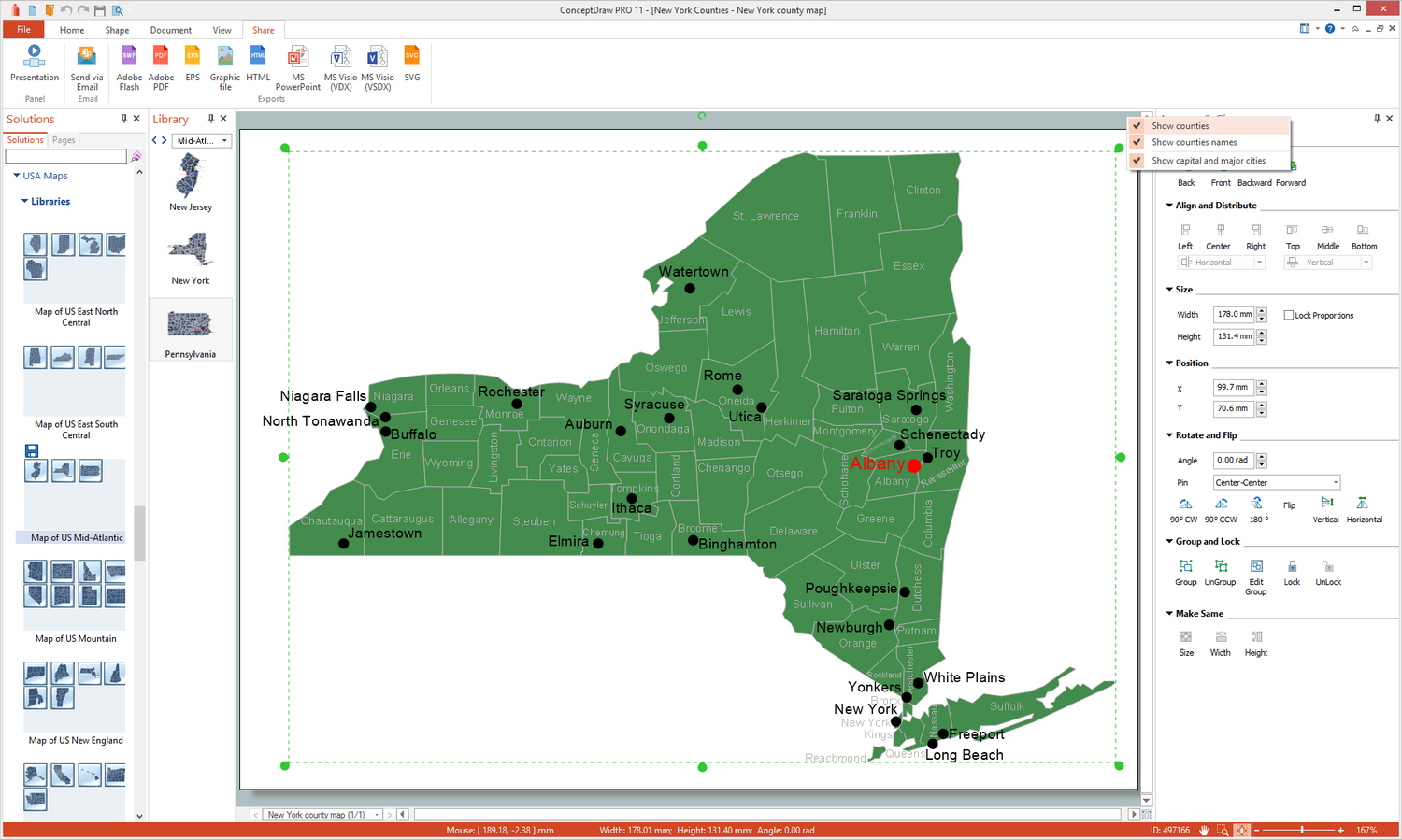 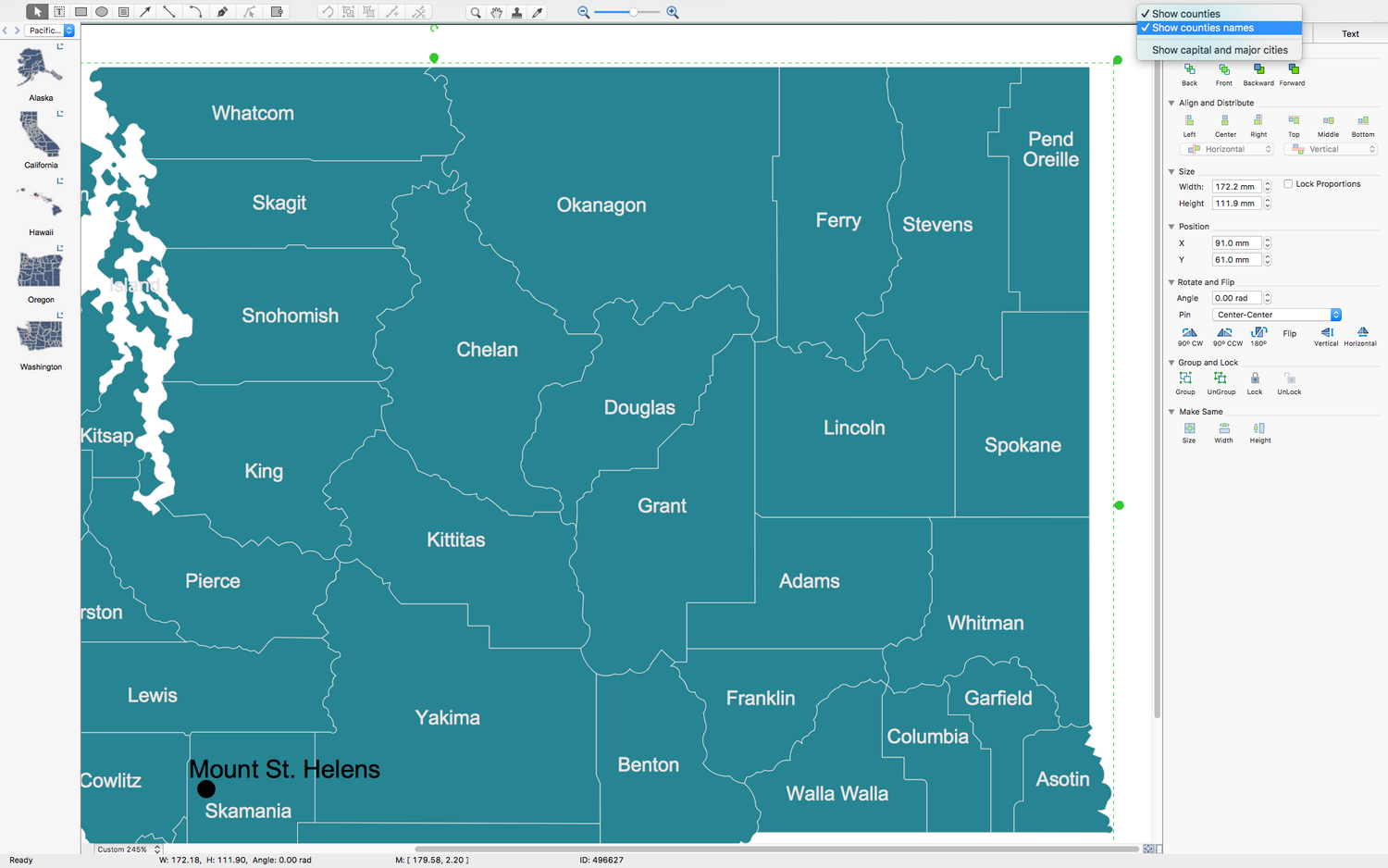 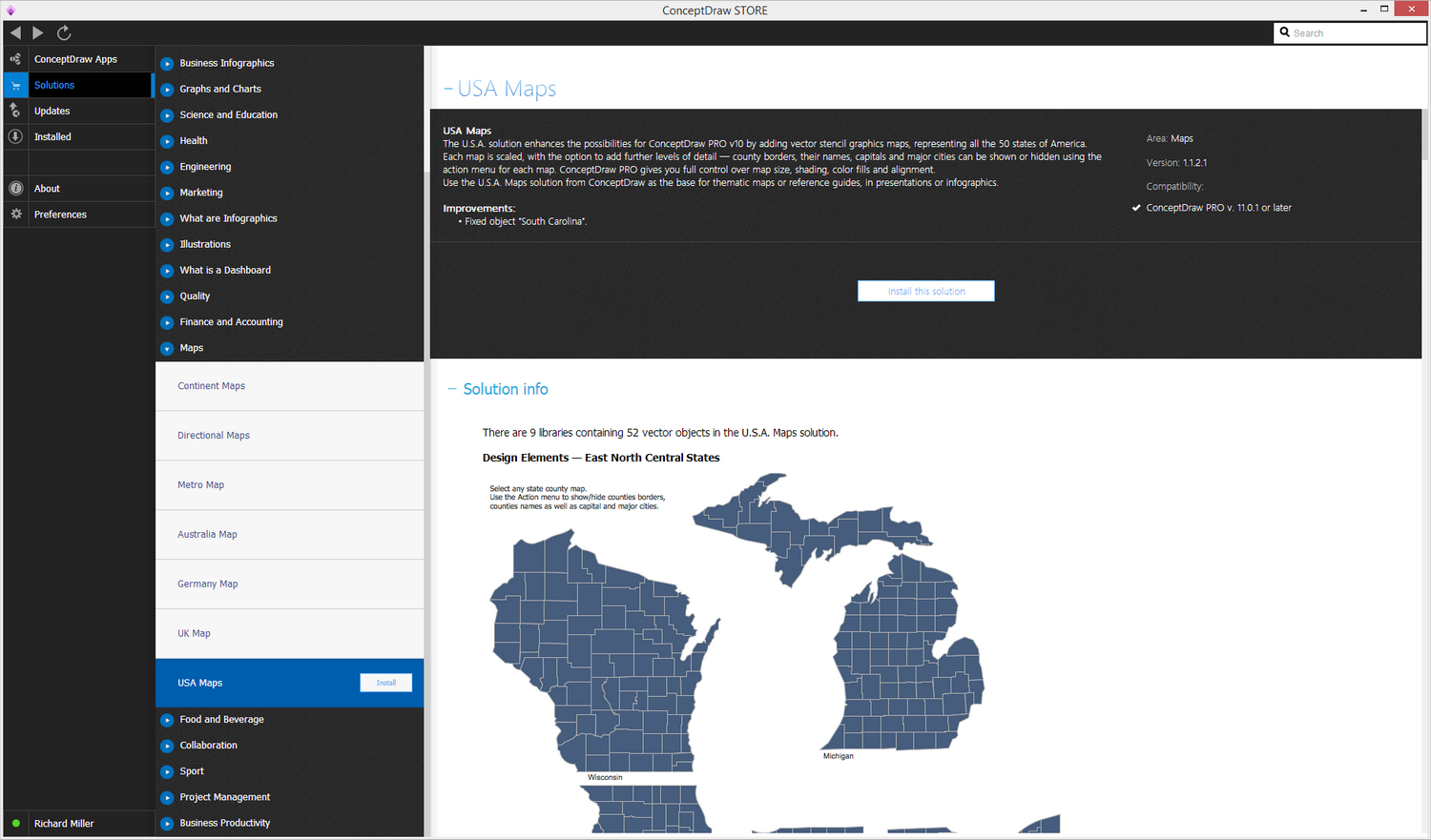 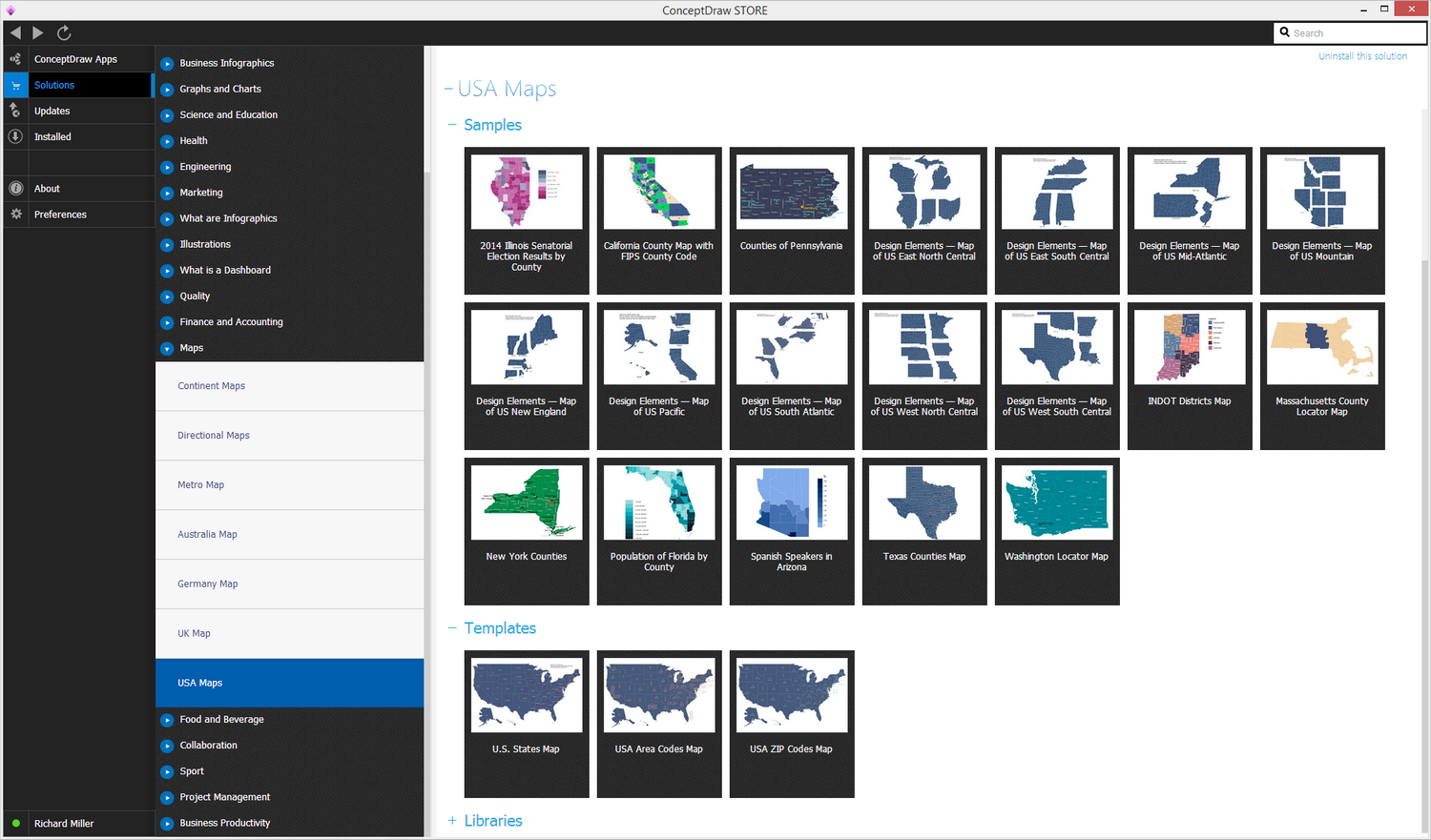 How to Draw Map of USA States

How to Draw Map of USA States

The United States of America; land of the free, home of the brave, fond of a cliché. A vast nation brought together under the Star-Spangled Banner, but split by state lines, political alliances, and cultural norms. To try and define the country as a whole is a futile task — it's often said the reason many Americans don't travel abroad is because they can experience anything the world has to offer within their borders. Perhaps it's not as hyperbolic as its sounds — sprawling metropolises are buffered by mountain ranges, deserts, forests and beaches; large immigrant communities have been established, including Latino, French, Irish and Caribbean; weather can range between freezing cold, to searing heat, with everything from hurricanes, tornados and dust storms in between. The U.S.A. is divided into 50 states, and the only two that don't border other states give a good example of the cultural and geographical juxtapositions found within the nation — Alaska to the North is a frozen tundra, shutting down in the darkness of winter, whereas the islands of Hawaii are a famed tropical paradise, attracting beach goers and surfers from the world over. They also both contribute to the ethnic diversity of the U.S. with their own indigenous peoples, the Polynesians of Hawaii, and the Eskimo tribes covering Alaska and Canada.

The 50 states serve as the most recognizable form of geographical division within the U.S., but these can be broken down further into counties and townships. Certain states are officially grouped together into homogenous regions, comprising the North-East, Midwest, South and West. Furthermore, numerous colloquial regions have been identified and become a part of the national lexicon — the deep South, the Bible belt, the mountain states, New England or the Pacific Northwest to name but a few. Governing such an expansive and diverse populace is a challenging prospect. American politics are dominated by the Democratic and Republican parties, and broadly and historically speaking, it can be said the 'Yankee' North favours the Democrats, with the 'Confederate' South supporting the Republicans. Further nuance can be discovered by examining political preferences geographically between states and counties, and combining that data with social factors such as age or race.

Any country can inspire a wealth of geopolitical statistical data, though America more than most. A common way of assimilating this data is to create maps that convey a particular theme or subject matter in relation to a specific geographical area. Known as thematic maps, they cover themes such as population density, average rainfall, or political allegiance, differentiating the data by using graphical elements and annotation. These are the main three uses for a thematic map:

Thematic maps contrast general reference maps, which tend to display information on a variety of subjects — vegetation, topology, roads and highways, for example. A thematic map will always focus on one particular subject matter. When designing these maps, cartographers use five main techniques:

Choropleth mapping — this technique assigns a colour hue or shade to a particular region on a map, that corresponds with a data value. For instance a map of the U.S.A. might colour each state red or blue, to show whether they support the Democrats or Republicans.

Proportional symbols — these maps use symbols that vary in size depending on the data they are representing. So a U.S. map showing cities might mark them using a skyscraper symbol that grows in size the larger the cities population.

Isarithmic maps — also known as contour mapping, this methodology is used to depict continuous, smooth elements such as elevation levels across a land mass, or a barometric pressure indicator, similar to what you might see on a T.V. weather programme.

Dot distribution maps — in these maps, one dot represents one incident of a certain event or condition. A map focusing on a particular United States region might use a dot to represent each sighting of a grizzly bear in the Pacific Northwest. You will know to avoid travelling to places where the dots are tightly clustered!

Dasymetric maps — similar to a chloropleth map, but doesn't divide the area arbitrarily, instead showing levels of density in reference to the geography of the land. This method can be used to show density of forestry over a large area for example, with a green hue that becomes darker where the concentration of trees are highest.

ConceptDraw have created a new solution, this time offering accurate vector stencil maps of all 50 U.S. states. These can be used as the base for any thematic map of your choosing. The U.S.A. Maps solution for ConceptDraw DIAGRAM contains 9 libraries, each covering a certain region of the U.S., and each state map contained within gives the option of adding further detail — an action menu allows you to show or hide county borders, their names, as well as capitals and major cities. Used in combination with ConceptDraw DIAGRAM 's other features, cartographers are able to annotate their maps, adjust the colour and shading of different areas, and add icons and graphics to enhance a professional looking thematic map.