The process of project implementation implies the execution of project tasks, the constant results tracking, terms and other indicators with the help of reports which are an integral part of project management. Moreover, along with the reports that display the accurate quantitative data in a table format, there are also quite popular reports which summarize the project data from a Gantt Chart and represent them in a graphical format allowing evaluating the project progress at a glance.

The Visual Reports solution extends abilities of ConceptDraw PROJECT by creating the illustrative and comprehensible reports on a project in a form of visual graphs and diagrams of common types, such as Bar Charts, Pie Charts, Line Charts, Divided Bar Charts, Timelines, Dial Dashboards. This solution allows generating the following types of reports: Actuals per Project Period, Resources Chart, Accumulative Budget Actuals, Tasks Status, Tasks Status Completion, Project Progress, Application of Project Budget Chart, Project Status, and All in One Indicators, which let one report about the tasks statuses, the project progress and degree of its completion, evaluate the project status, depict the project expenses by days and define the days that go beyond the budget, compare visually the actual expenses and expected ones at the project planning stage, generate the Resource chart depicting the utilization of project resources by days, and show other useful information. The set of tailor-made examples included to the Visual Reports solution enables testing the work of listed report types and designating advantages of each of them for the further use in your management work. So, the Visual Reports solution is a highly effective project management tool which helps project managers and other stakeholders to generate the informative, colourful, clear and successful reports during the project implementation.

The "Accumulative Budget Actuals" report generated for your project reports includes the information about project’s accumulative budget actuals in a form of Divided Bar Chart. You can see the total amount of budget in a diagram and the table of project expenses by weeks. Moreover, this diagram lets visually compare the budgeted amounts due to the colouring the periods in red that go beyond the budget, while the budgeted periods are coloured in blue. 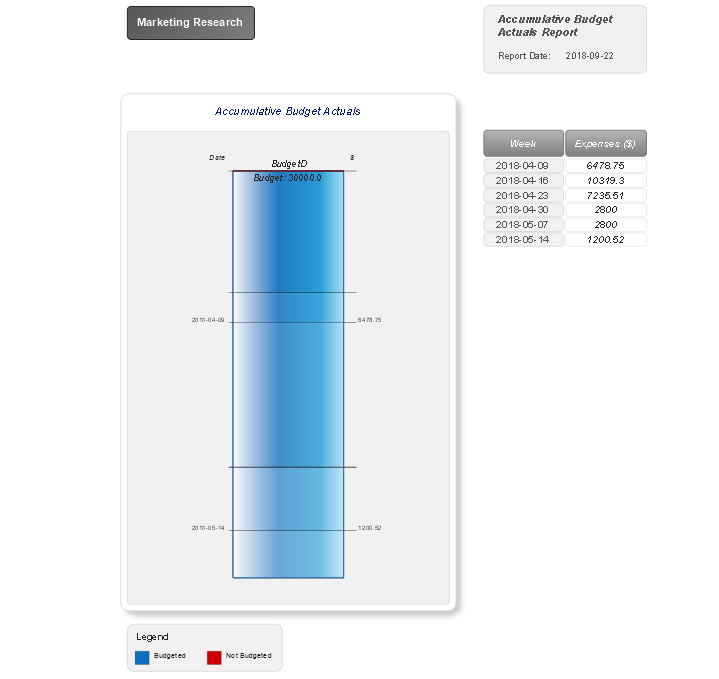 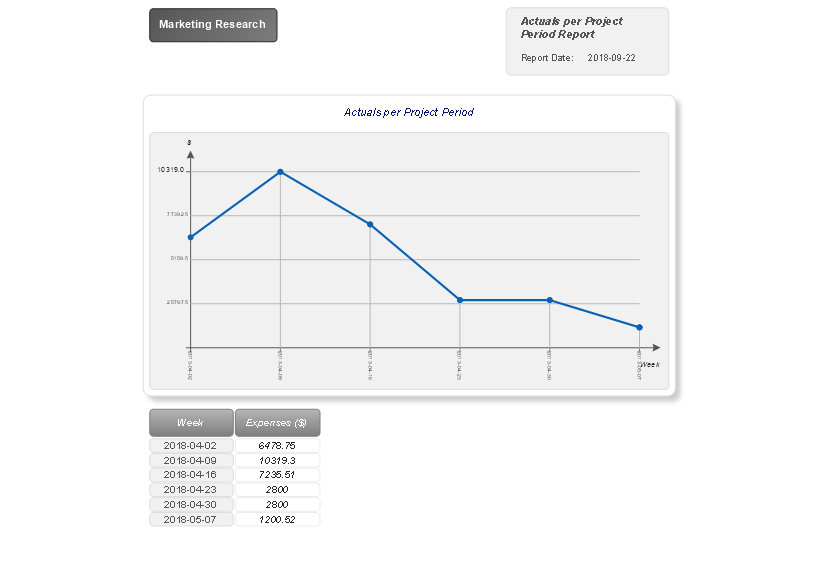 Visual Reports — All in One Indicators

The "All in One Indicators" report formed for your project is a combination of four visual dashboards: Project Progress, Project Status, Tasks Status Completion, and Tasks Status. With the help of visual indicators, these dashboards give the multilateral and detailed overview of your project, its state, progress, results, and achievements. 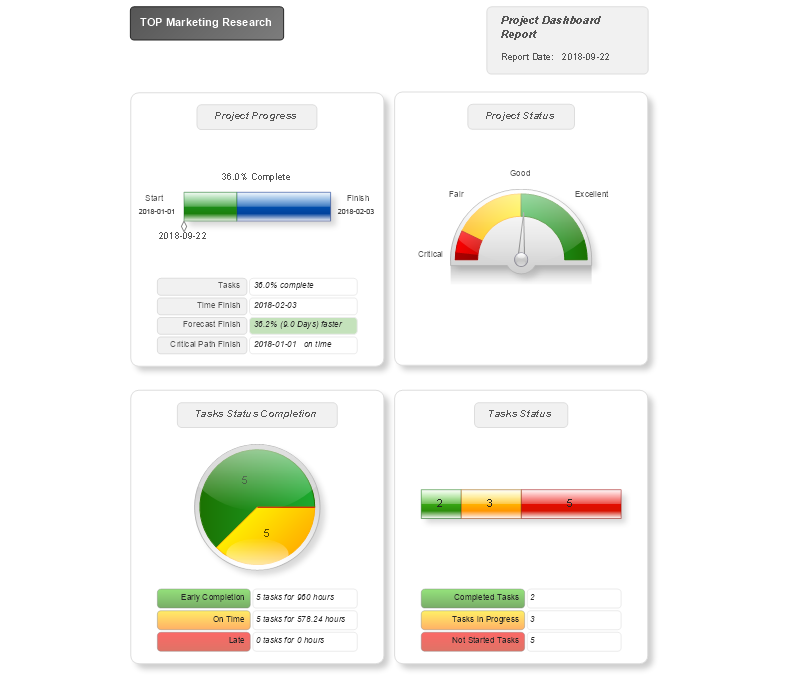 The "Application of Project Budget Chart" report generated for your project is a Line Chart, which depicts the project's planned values that are joined by a blue line and actual values connected by a red line. This visual difference allows comparing the values at a glance, making conclusions and correcting project implementation, if needed. The included table depicts the values of actual and planned project expenses by weeks within a reporting period. 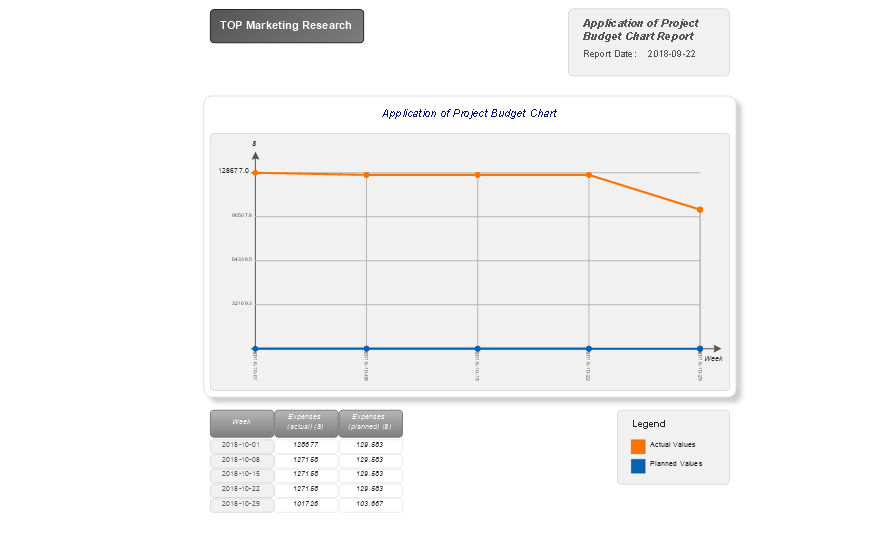 The "Project Progress" report formed for your project narrates about the project progress and degree of its completion using the Timeline Diagram, and also depicts the project numeral values in an accompanying table, such as degree of tasks completion in percent, the planned date of project finish, the forecasted finish date, and date of the critical path finish. 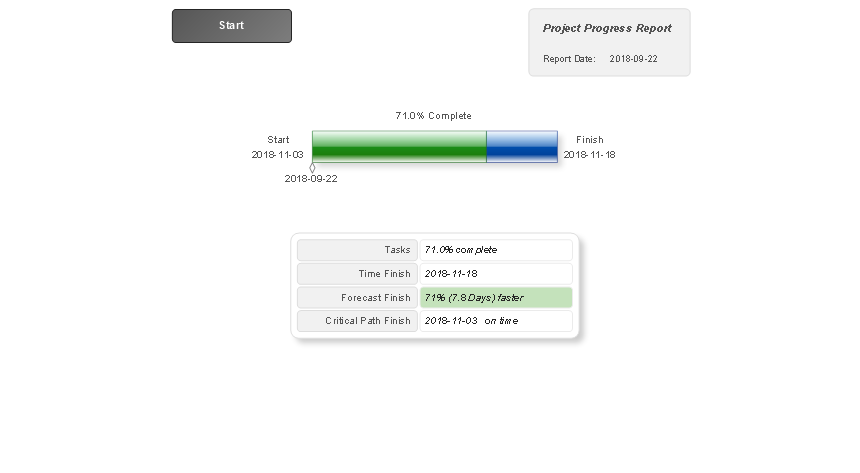 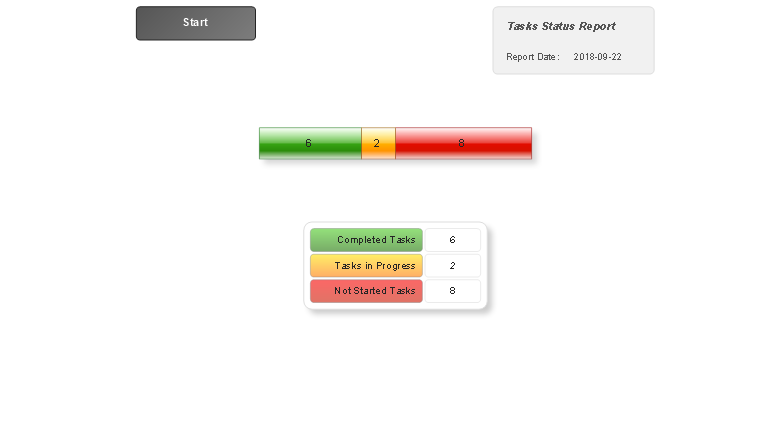 The "Tasks Status Completion" report generated for your project illustrates in a Pie Chart the number of project tasks that are "on time", the early completed tasks and late tasks. Each of these sectors is coloured in yellow, green and red colours correspondingly to be detected in one moment. 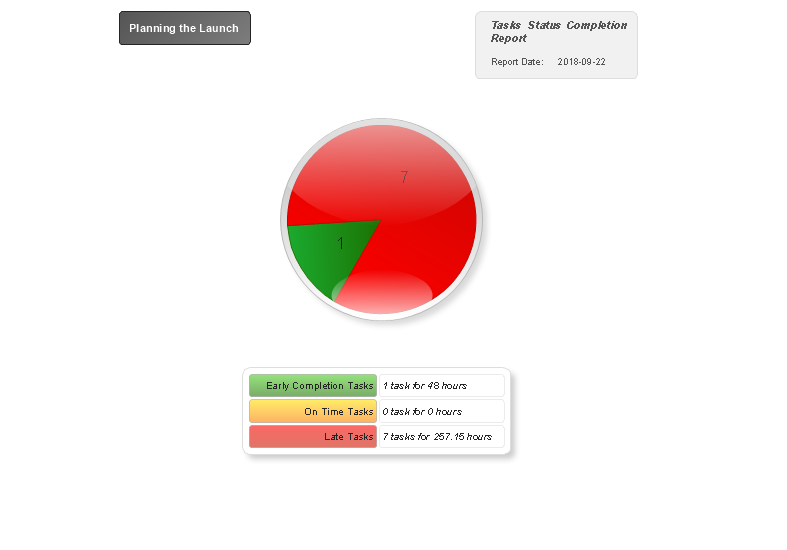 The "Project Status" report for your project illustrates the dashboard that summarizes the project data and evaluates the project status. Look at it to make sure your project is implemented well or it has a critical status, and so requires the immediate intervention and serious changes. 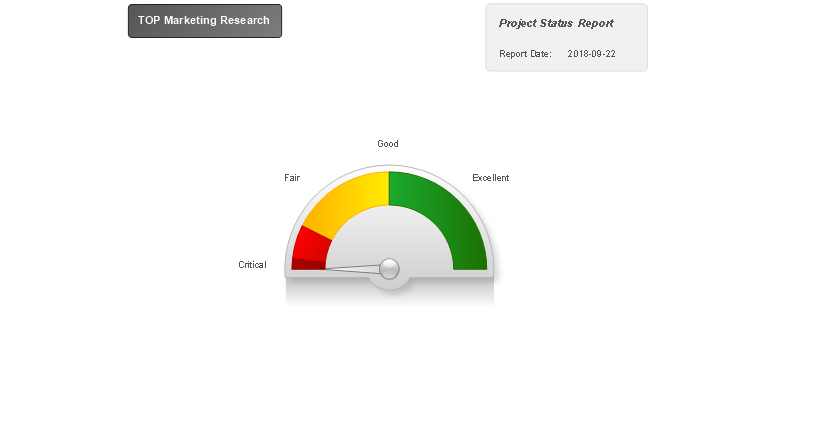 The "Resources Chart" report created for your project depicts in the table and in a Vertical Bar Chart the information about the resources utilization in your project by days, so you can see the number of man-hours per each day within a reporting period in the chart and in the table below the chart. 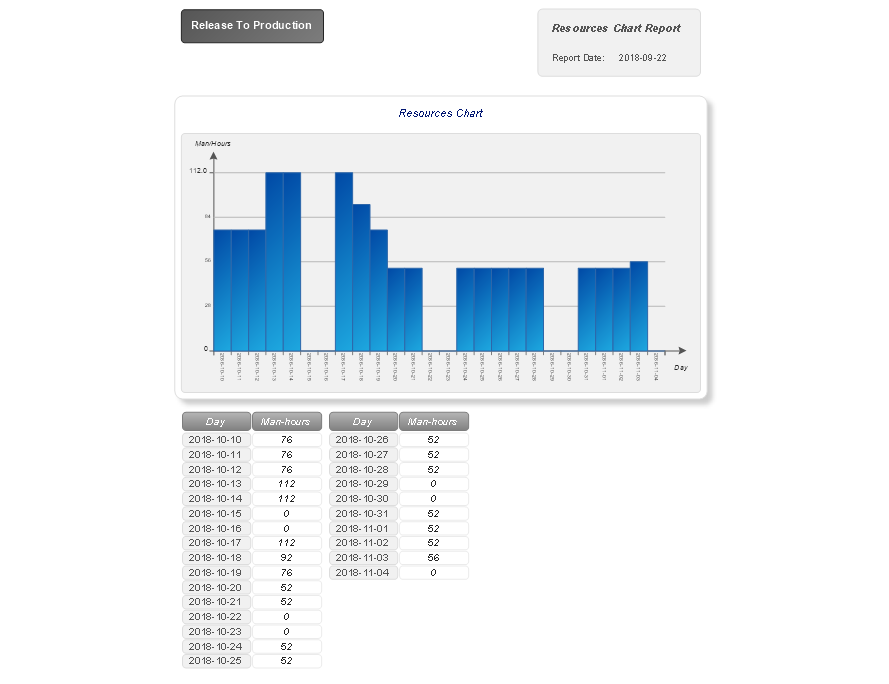 This project example is a project on creation of the company's newsletter, its design, editing, layout of articles and graphical information, which includes as well the stages of its publishing and distribution. It is a complex project with many phases and tasks but thanks to ConceptDraw PROJECT we have an ability to structure them neatly and precisely. This example lets you make sure that the projects of any duration and complexity can be easy planned and managed in the ConceptDraw PROJECT software. Besides, this example is the best one to learn more about other opportunities of reports included in the Visual Reports solution. 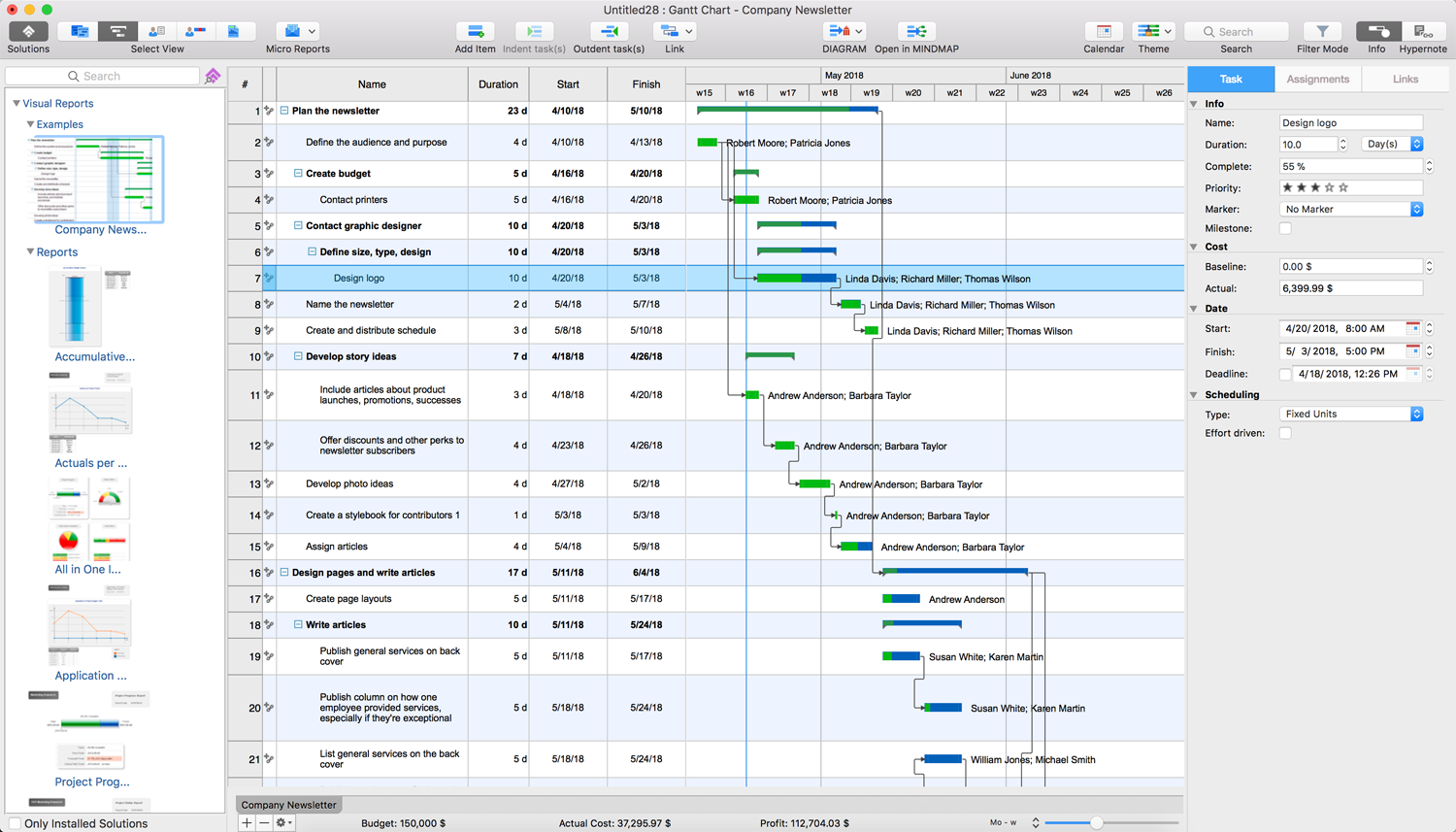