The Class Hierarchy Tree or Inheritance Tree is a classification of object types in object-oriented programming, which defines objects as instances of classes and connects class groups with inheritance relationships, such as “extends”, “inherits”, “it is an abstraction” and “interface definition”. The class can be determined in terms of other classes and defines the state and behavior specific to the objects of this class. At the top of the hierarchy is a single base class, all other classes derive from it forming the hierarchy. Graphically, the hierarchy is usually presented as a tree with designated relationships between the classes. The structure of any class hierarchy greatly depends on the language used for its writing. In some cases, the hierarchies can have multiple roots (base classes) and multiple trees, which subsequently merge into one another. Such language as Java is limited to the single inheritance, so its class hierarchy is built with a single root.

The class hierarchy and correspondingly the class tree can be as deep as necessary. The instance variables and methods are inherited by the classes down through the hierarchy, but can also be redefined in a subclass. Each derived class inherits the data and functions of the base class, the classes of each next level inherit methods of the previous one that is their parent class. Thus, the lower the class in the hierarchy, the more specific it is.

The Class Hierarchy Tree solution enhances the functionality of the ConceptDraw DIAGRAM and ConceptDraw MINDMAP software with a wide range of samples and a large set of ready-made vector shapes, smart and direct connectors allowing to create the Class Hierarchy Trees and Class Diagrams, object-oriented classes, making object-oriented programming easier illustrating the concepts of object-oriented programming, generalization and inheritance in the Java and Python classes, as well as the design of Class Hierarchy Mind Maps and their automatic creation in class tree diagrams in ConceptDraw DIAGRAM files. This solution is an ideal instrument for all IT and web specialists, web-designers, web-programmers, and lecturers, allowing them to correctly and clearly build class hierarchies, organize code and clearly demonstrate how classes interact and work.

This solution contains 10 examples and 2 libraries containing 27 vector graphics and icons, which allow you to create professional-looking documents. 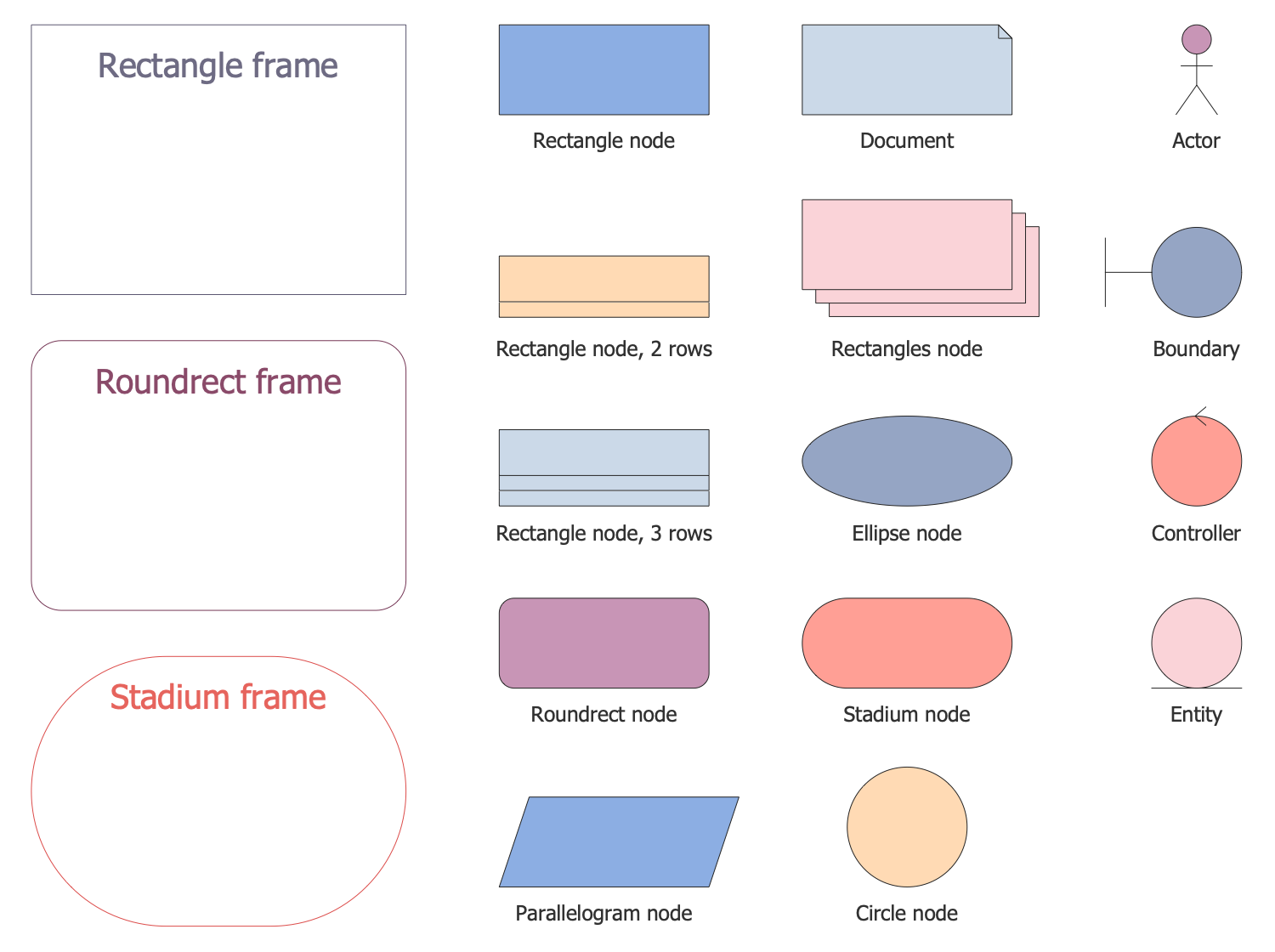 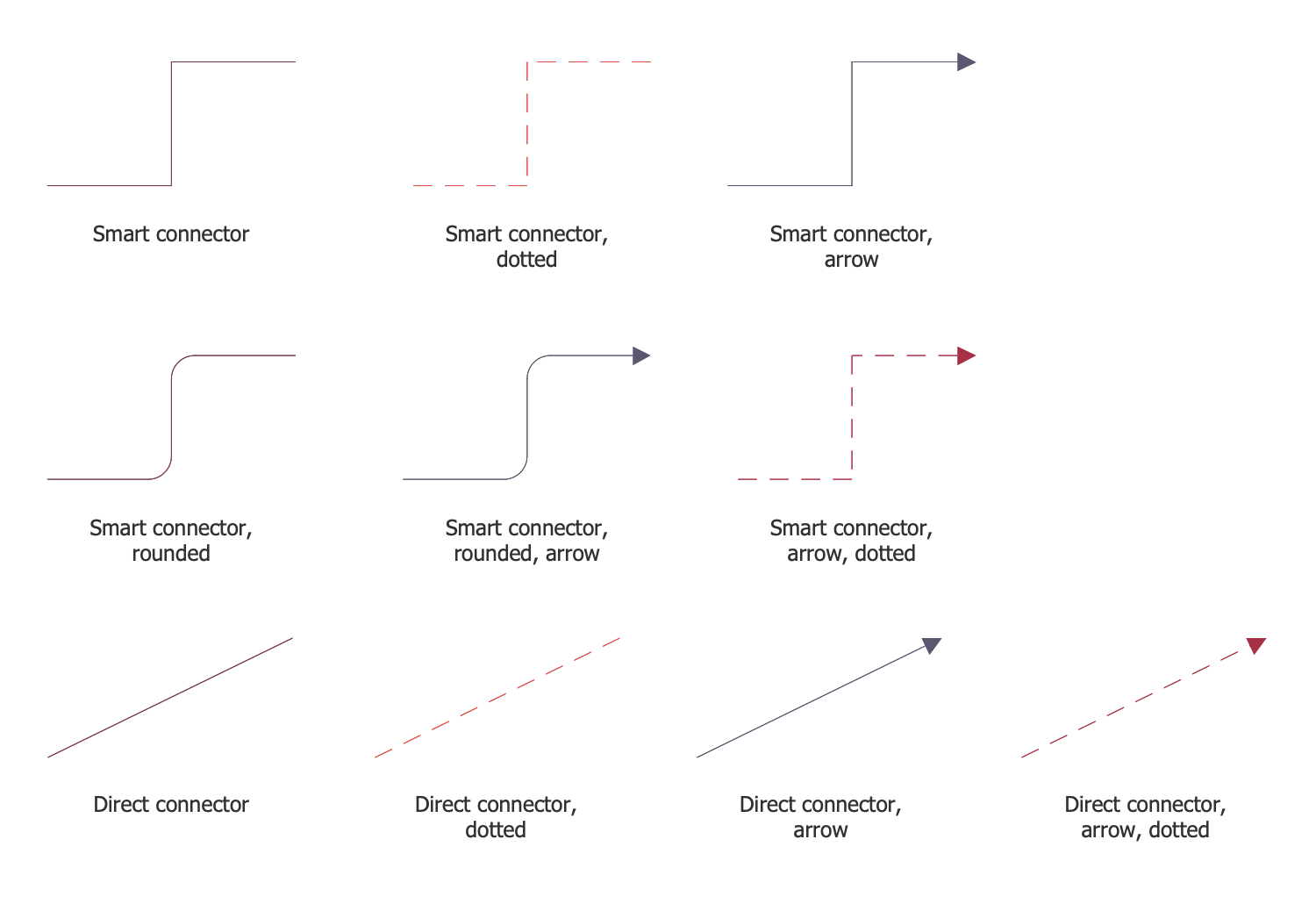 There are a few samples that you see on this page which were created in the ConceptDraw DIAGRAM application by using the Class Hierarchy Tree solution. Some of the solution's capabilities, as well as the professional results which you can achieve are demonstrated here on this page.

This sample diagram illustrates the ECB (Entity-Control-Boundary) Class Diagram. The analysis object model instantiates the ECB Pattern that is a simplification of the Model-View-Controller (MVC) Pattern. The ECB divides the system into three types of classes: entities, controls, and boundaries, which are also official stereotypes of UML classes. The entities are objects that represent system data, such as Product, Customer, Transaction, Cart, etc. The boundaries are objects that interact with the system actors, such as ServerProxy, UserInterface, DataBaseGateway, etc. and, finally, control elements are objects that act as intermediaries between boundaries and entities and organize the execution of commands coming from interaction entities and boundary objects. Typically, the controls correspond to use cases in the design model. UML uses some special icons to represent them, but there are no special icons on this diagram, and they are all presented as boxes. 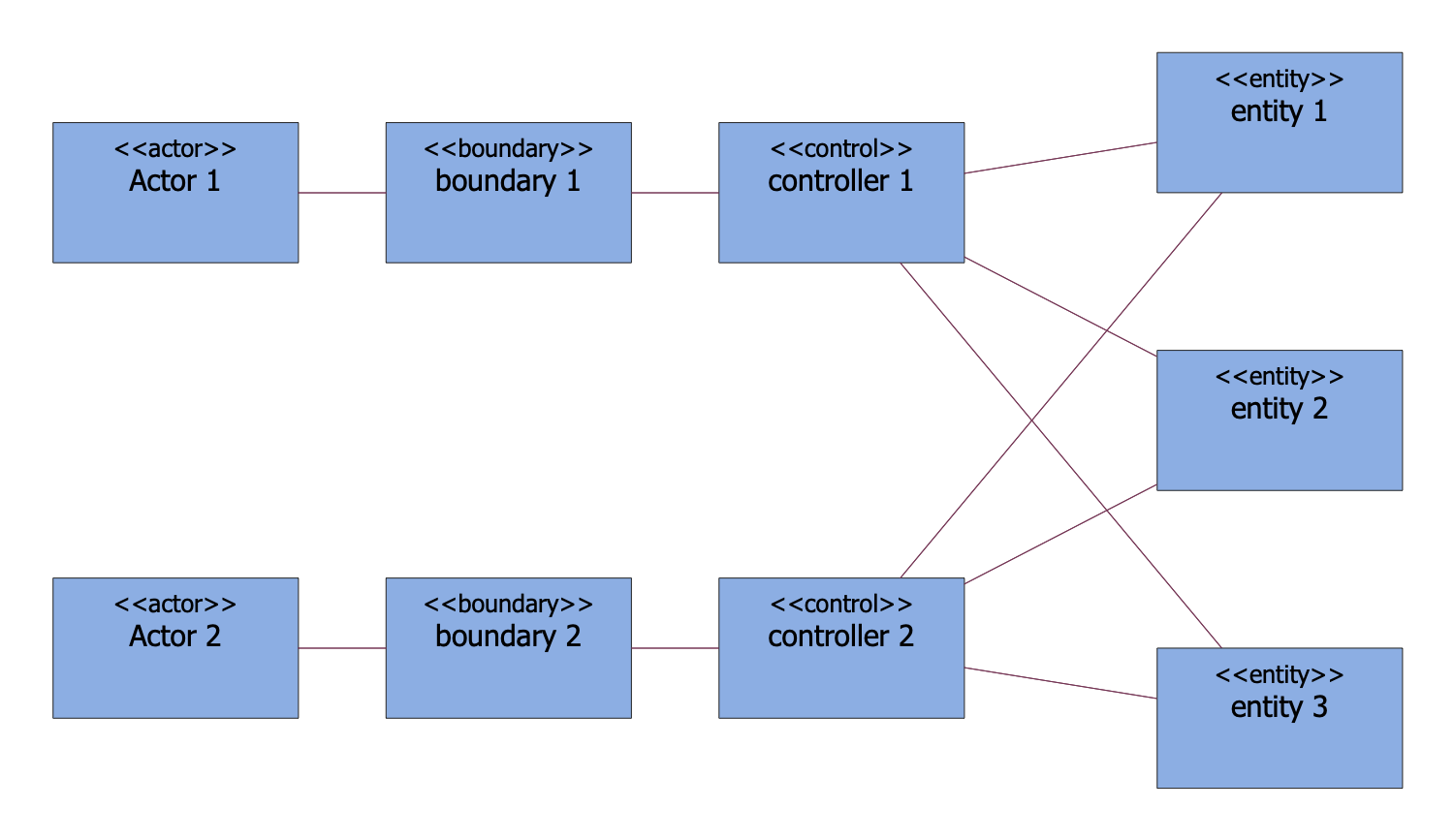 This diagram sample represents the Entity-Control-Boundary Pattern constructed in ConceptDraw DIAGRAM software using the special symbols from the common UML set of symbols. You can see the actors, boundaries, controllers, and entities connected with each other by the lines. The last three are presented in the form of circles of different colors, for each group a different color is selected; the actor looks like a man. The entities with which the system interacts in the course of its work are called actors, and each actor expects that the system will behave in a strictly defined and predictable way. The boundary is a class that is accessible from the outside, the controller is responsible for performing various operations, and the entity may contain validation or business logic. The entity classes model the long-term information that is processed by the system, as well as the behavior associated with this information. This Entity-Control-Boundary Pattern is effective when creating business-oriented components. 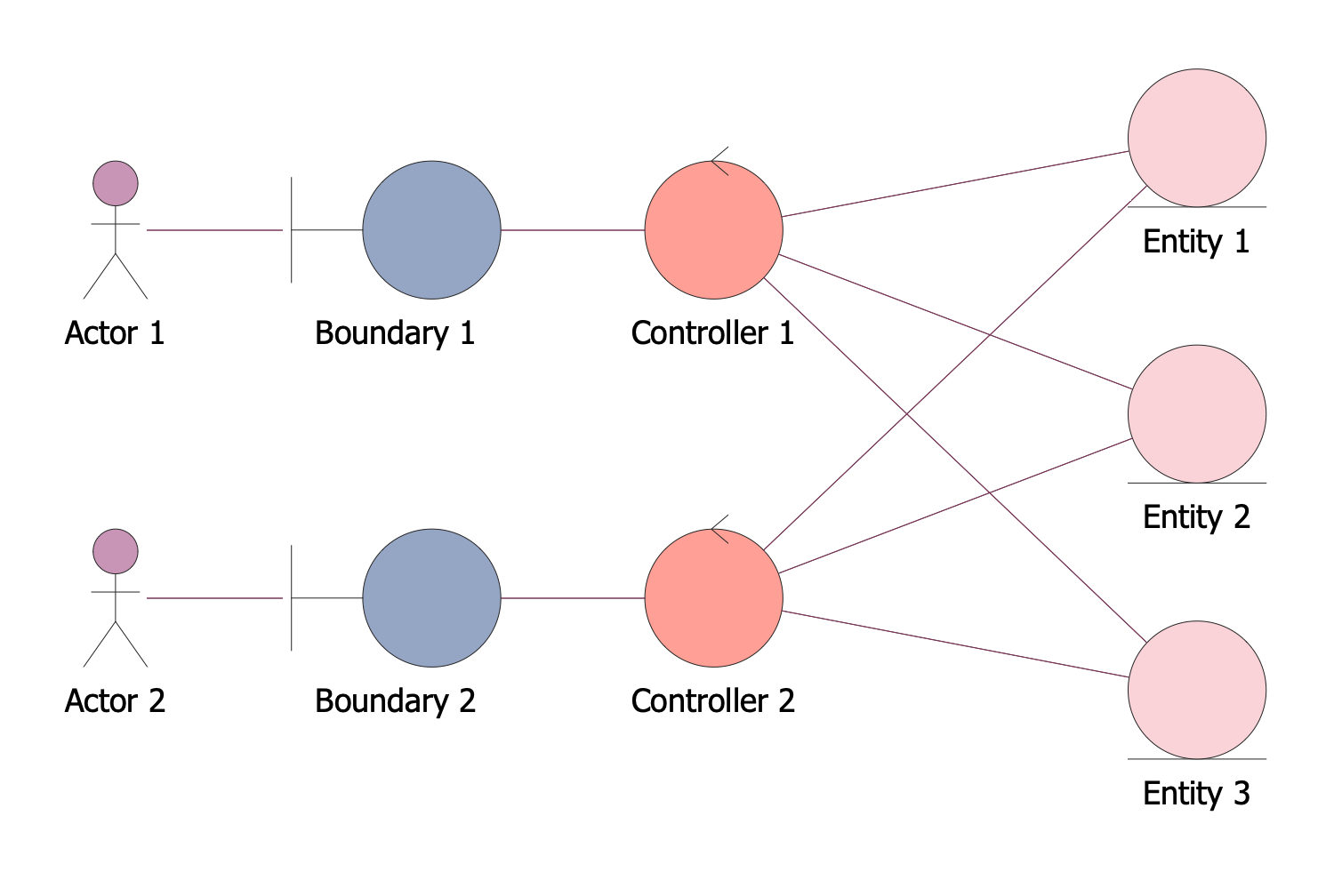 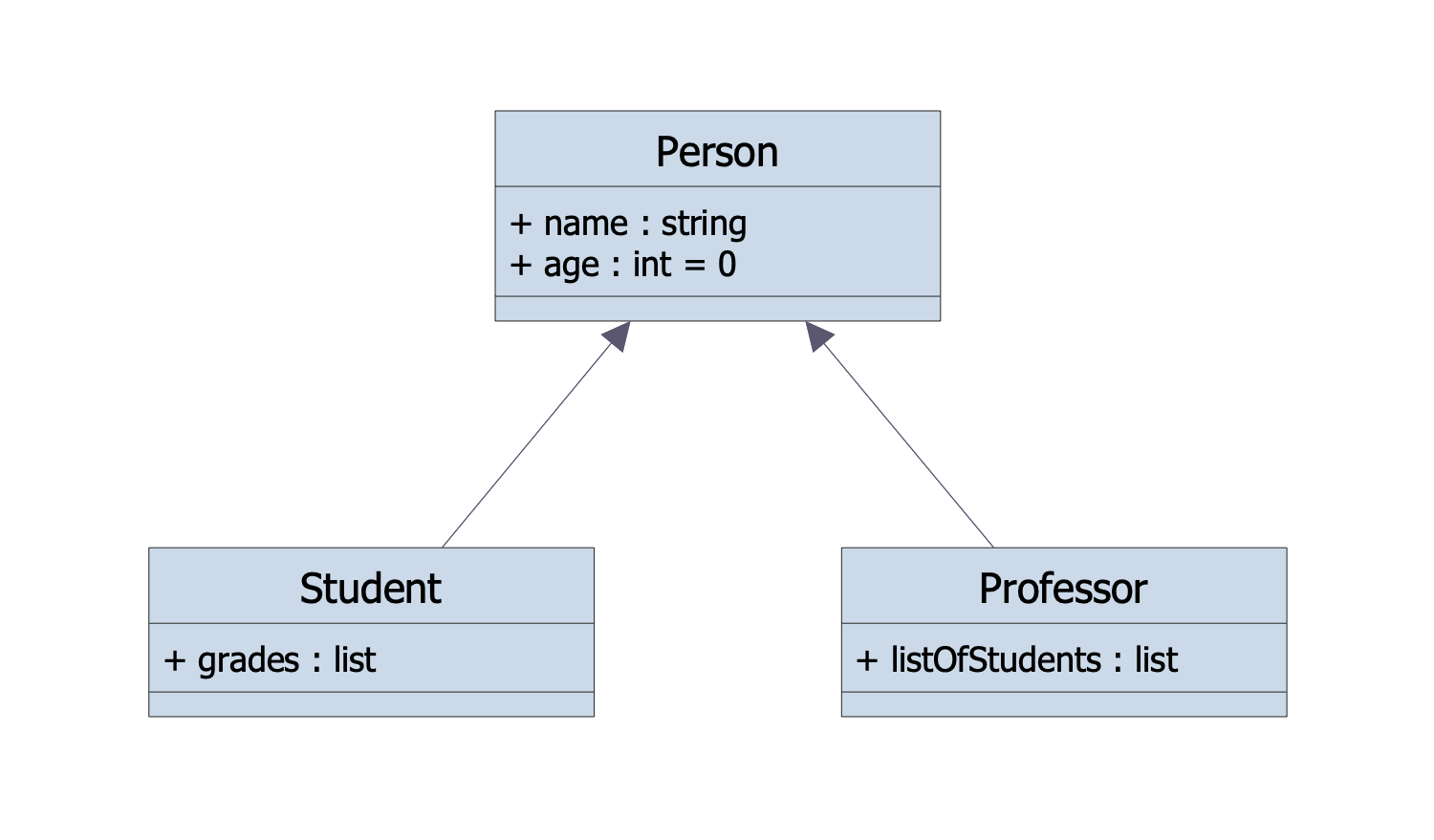 This diagram was created in ConceptDraw DIAGRAM using the combination of libraries from the Class Hierarchy Tree solution. An experienced user spent 10 minutes creating this sample.

This sample demonstrates the diagram of the inheritance hierarchy of Scala classes. Scala is a statically typed, object oriented programming language that allows simple and quick creating the component software. Scala combines the functional and object oriented programming concepts, and is primarily oriented on the easy integration with applications running on the modern virtual machines such as Java (JVM). The main Scala compiler generates Java class files that can be executed under JVM. This diagram shows that classes corresponding to the primitive types in Java, such as Boolean, Byte, Char, Double, Float, Int, Long, Short, as well as Unit type extend the AnyVal class. All other classes are subclasses of the AnyRef class, which is synonymous of the Object class from the Java virtual machine or .NET. The diagram shows that all Java classes and Scala classes are subclasses of the AnyRef class. Both AnyVal and AnyRef classes in their turn extend the Any class that is the root of the hierarchy. 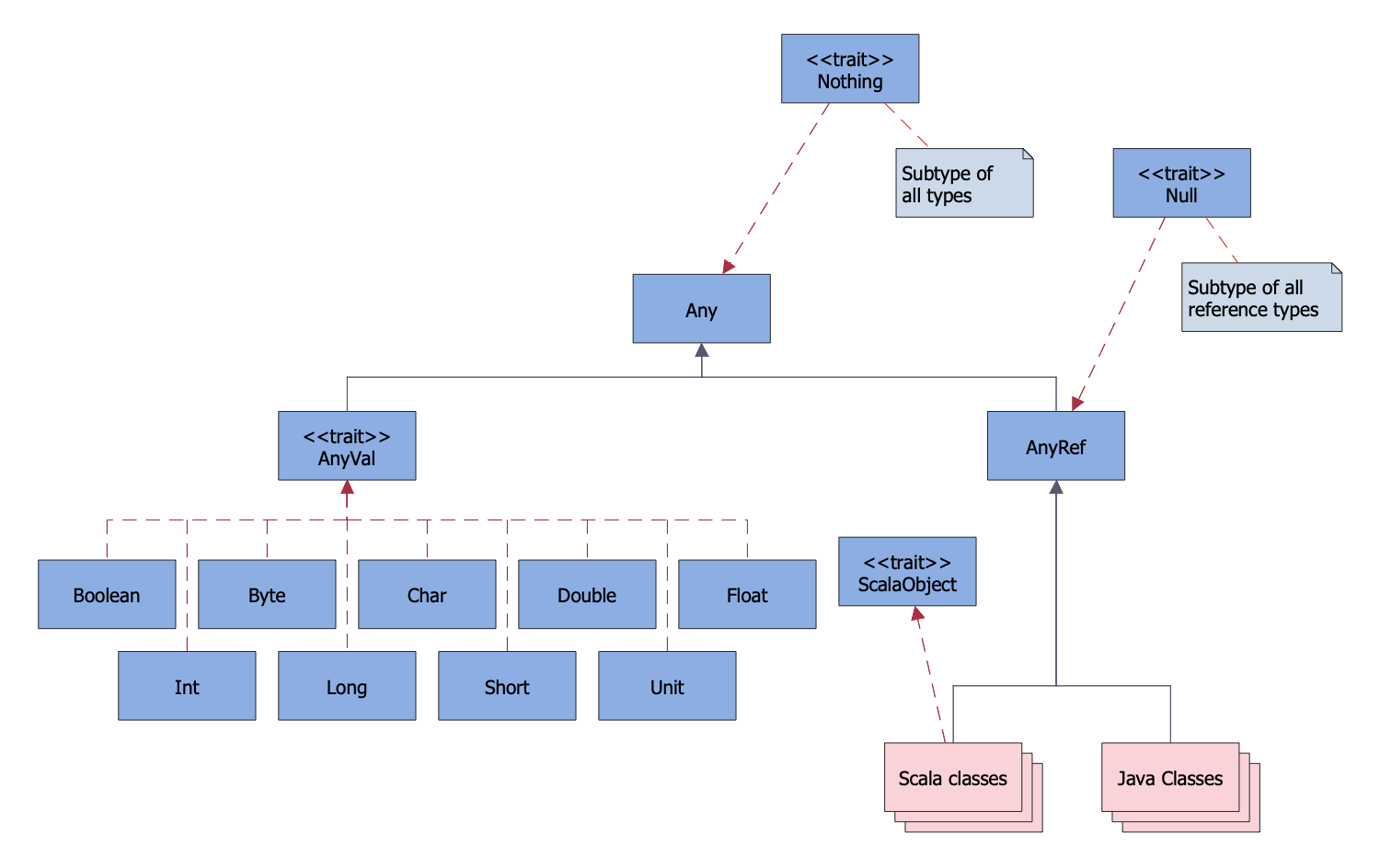 This Mind Map illustrates the inheritance tree or the class hierarchy, which is typically formed by the classes. At this, the hierarchy can be as deep as needed. As for the hierarchy of classes in Java, there is one root class — the Object class that is a superclass for all other classes in the hierarchy. The methods are inherited automatically by the classes down through the levels in the hierarchy. All methods defined in the root class are inherited by all levels placed below. This Mind Map illustrates the multiple layers of inheritance, the Object class is represented at the top. The Character class is a subclass of the Object class, so the Object is the superclass or the parent class, and the Character class is its child or derived class. The Character class has on its turn the subclasses Digit and Letter that extend it, and the Letter class also has two subclasses — Vowel and Consonant. 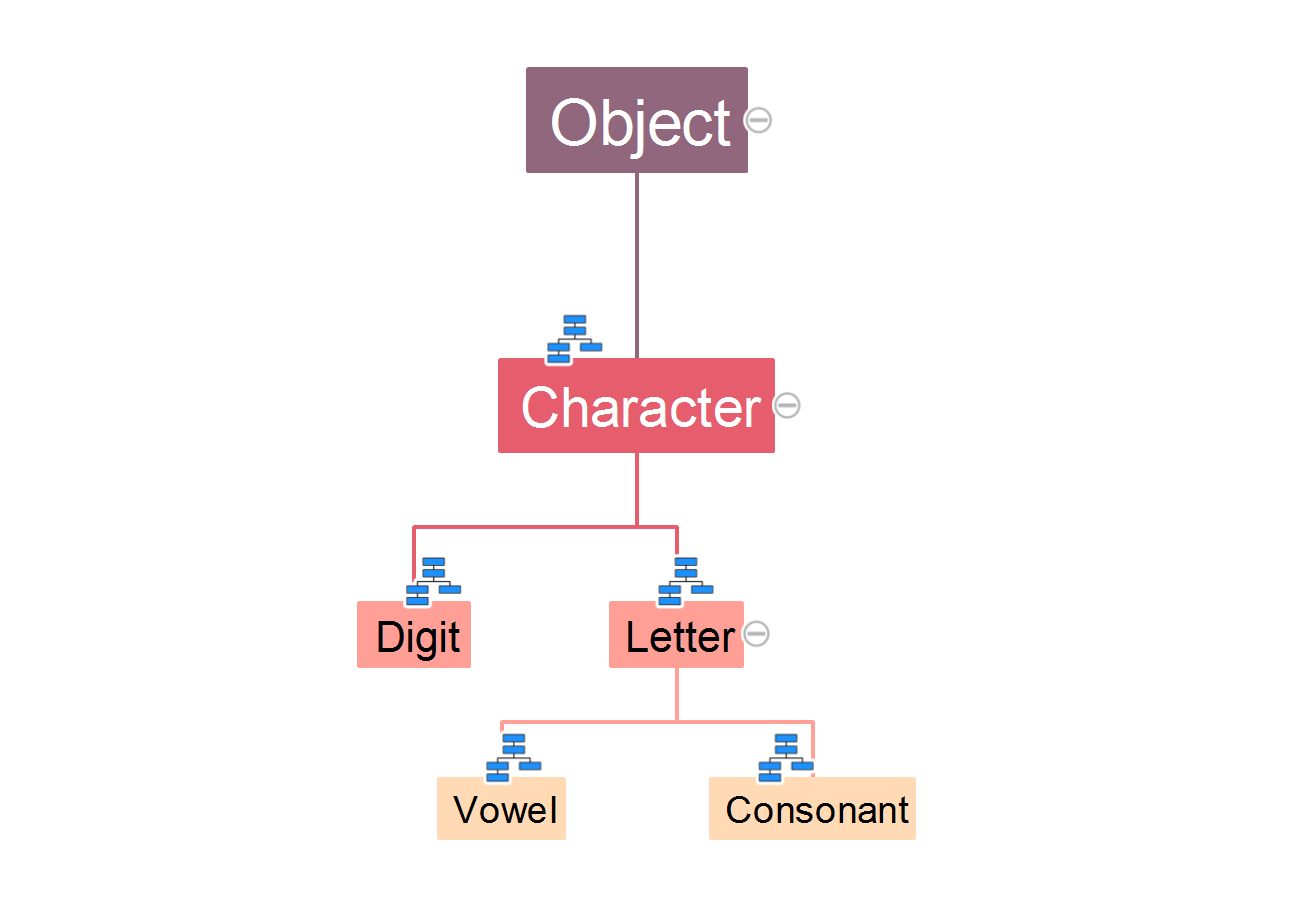 This Mind Map describes the Ruby class hierarchy. Ruby is one of the youngest programming languages; it was developed by Yukihiro Matsumoto in Japan in 1995. It is a dynamic, object-oriented, high-level open source programming language with a focus on simplicity and productivity. The Ruby language was developed on the basis of well-known programming languages, combining their most convenient functions, it is closest to the Perl and Eiffel languages by its syntax features and to the Smalltalk by the object oriented approach, as well as has features from Python, Lisp, Dylan, and CLU. The list of its features includes exception handling, iterators, closures, garbage collection, threads, and many others. The language has multithreading, realized independently from the operating system. All data in the Ruby language are the objects, each function is a method. All classes are derived from the Object class, so any object can use the methods defined in it. 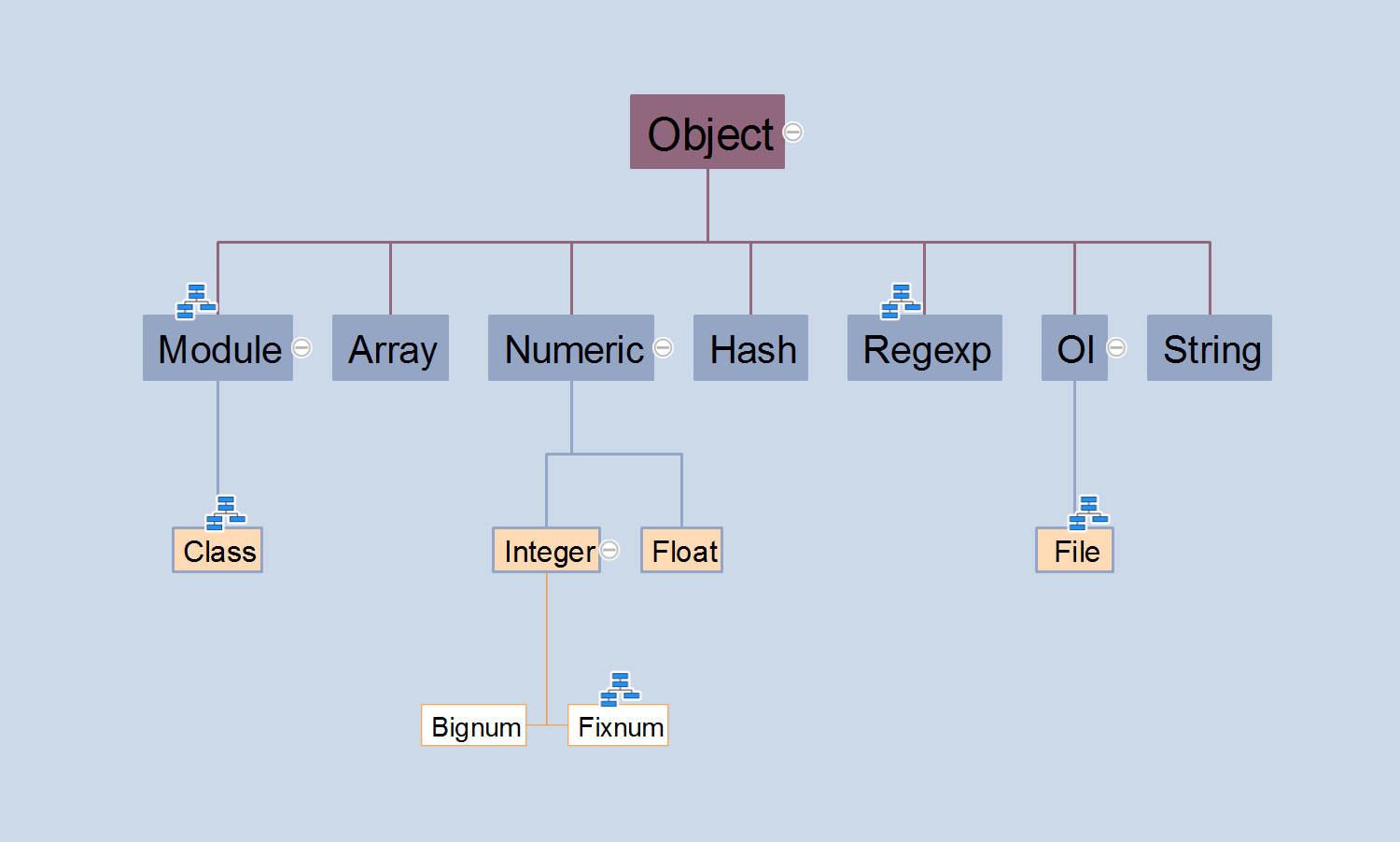 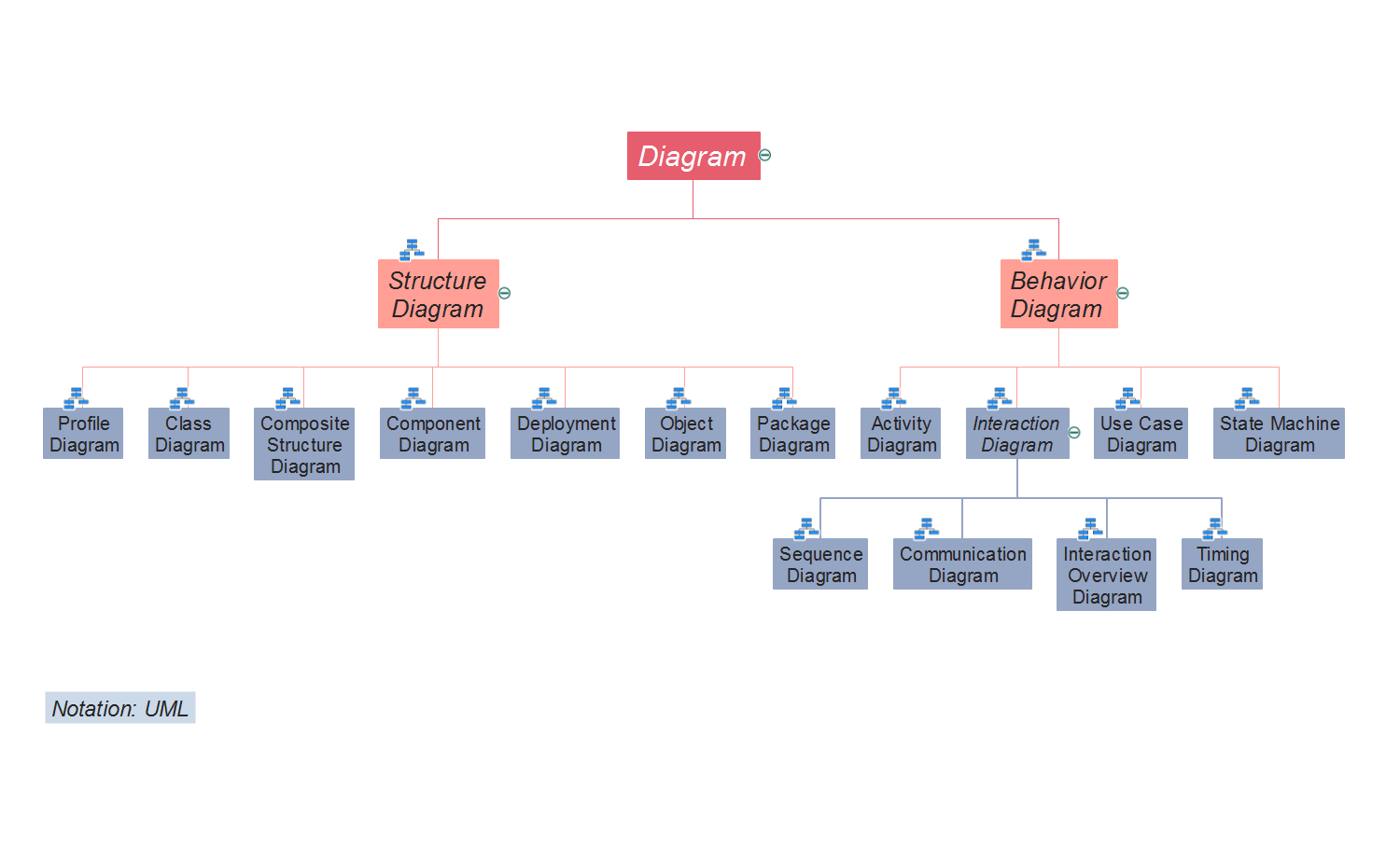 This sample was autogenerated to ConceptDraw DIAGRAM from the Inheritance Tree Mind Map made in ConceptDraw MINDMAP and shows the inheritance tree or in other words the class hierarchy. It is a strict tree formed from the classes that are inherited from each other from the top down. This hierarchy contains three levels, but as needed, the ConceptDraw DIAGRAM software lets one construct the hierarchy of any depth. You can observe one root class Object at the top of this hierarchy. It is a superclass or parent class because the Character class represented on the first level is its subclass or child class. The Character class is also parent class for the subclasses or child classes Digit and Letter represented on the second level. And, finally, on the third level, you can see the subclasses of the Letter class — the Vowel and Consonant classes. All methods are inherited by the classes from their parents from the top down through the hierarchy. 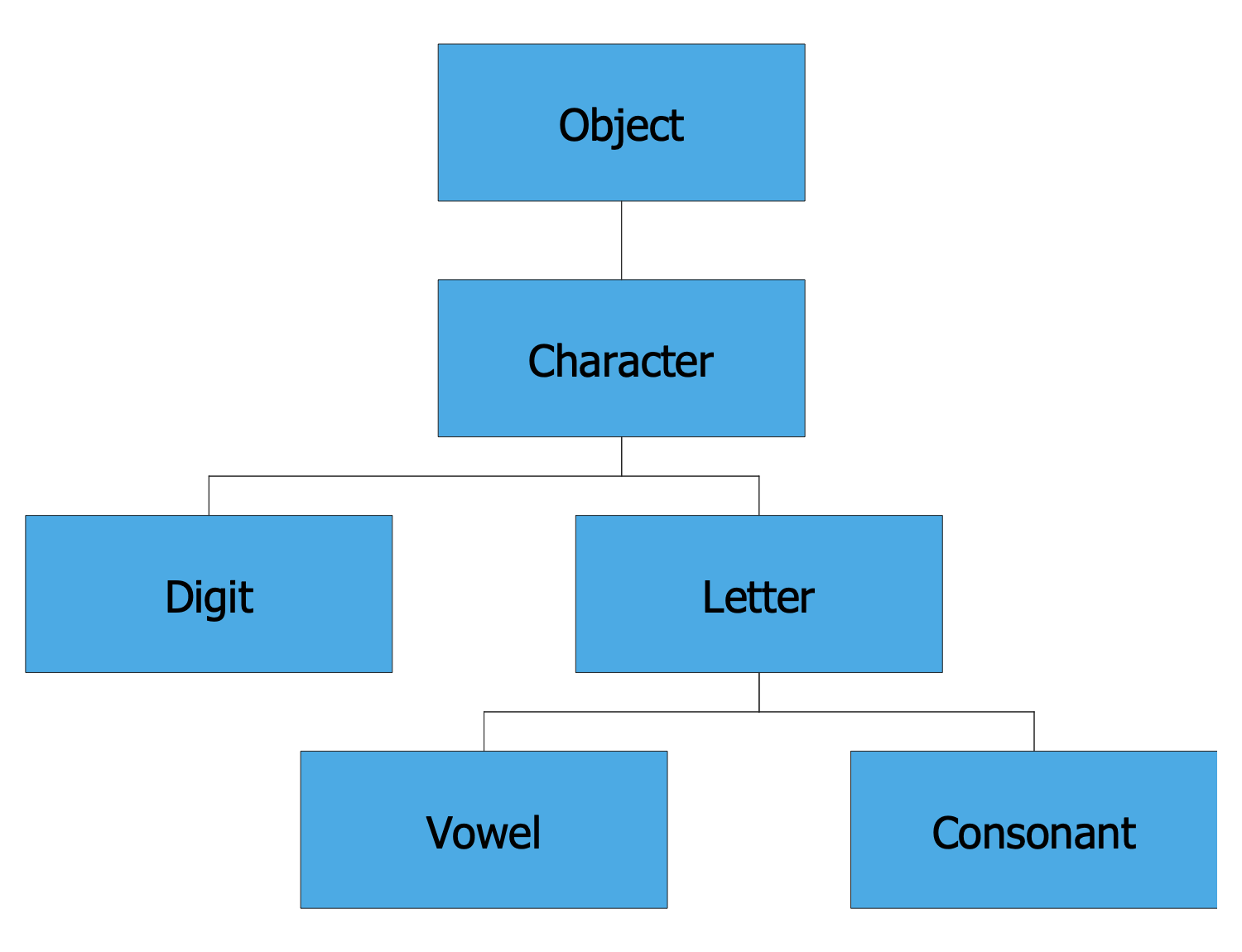 This sample was automatically generated from the Mind Map created in ConceptDraw MINDMAP and opened in ConceptDraw DIAGRAM. It is a Class Hierarchy Tree made for the Ruby — the object-oriented and high-level open-source programming language. Ruby is a dynamic and carefully balanced language developed by Japan programmer Yukihiro Matsumoto. Being based on such well-known programming languages as Perl, Python, Eiffel, Lisp, Dylan, CLU, it combines their best properties, features, and functionalities. The Object class is a root class in the Ruby language and all other classes are derived from it. That's why Object is placed on the top of the hierarchy and its child classes are Module, Array, Numeric, Hash, Regexp, Ol, and String. The Numeric is a base class for all numbers — Integer and Float, the Integer in its turn includes Bignum and Fixnum. The Class and File are the derivatives for Module and Ol correspondingly. The similar hierarchy can be made for any programming language — Python class hierarchy, Perl class hierarchy, Java class hierarchy, etc. 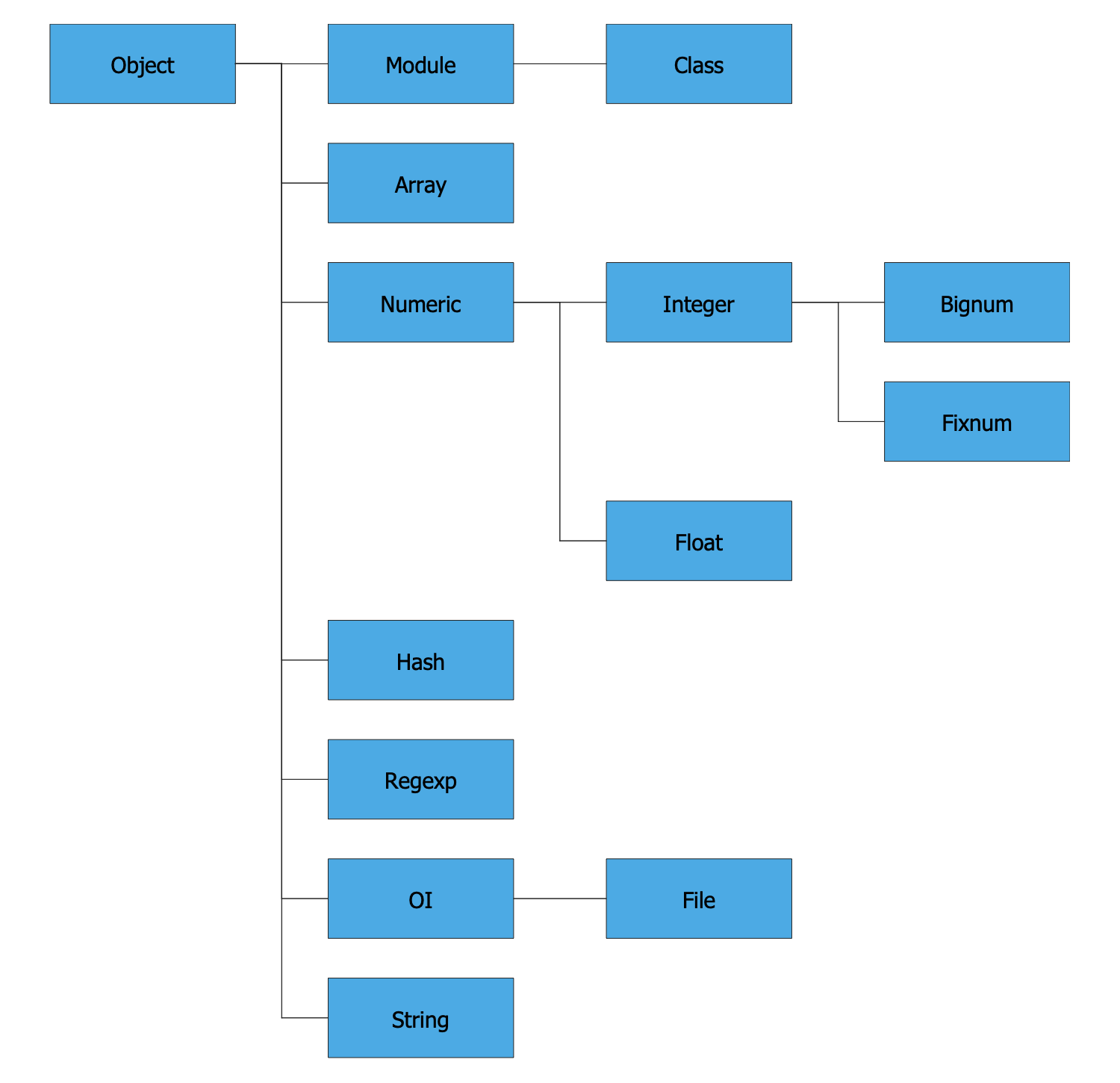 Being initially made as a Hierarchy Mind Map in ConceptDraw MINDMAP, this diagram was autogenerated and opened in ConceptDraw DIAGRAM depicting the hierarchy of UML 2.2 diagrams. The UML is a unified graphical modeling language used for describing, visualizing, designing and documenting the object-oriented systems. The UML impresses by its diversity of diagrams' kinds, you can observe in this diagram them all. Two large main groups are represented on the first level in the hierarchy: Structure diagrams and Behavior diagrams. When the first group describes the system's static structure and is represented by the Class Diagram, Composite Structure Diagram, Object Diagram, Profile Diagram, Component Diagram, Deployment Diagram, and Package Diagram, the second group includes the Use Case Diagram, Activity Diagram, Interaction Diagram, and State Machine Diagram, which depict the dynamic behavior of the system's objects. The group of Interaction Diagrams also counts several subtypes, such as Interaction Overview Diagram, Sequence Diagram, Communication Diagram, and Timing Diagram. 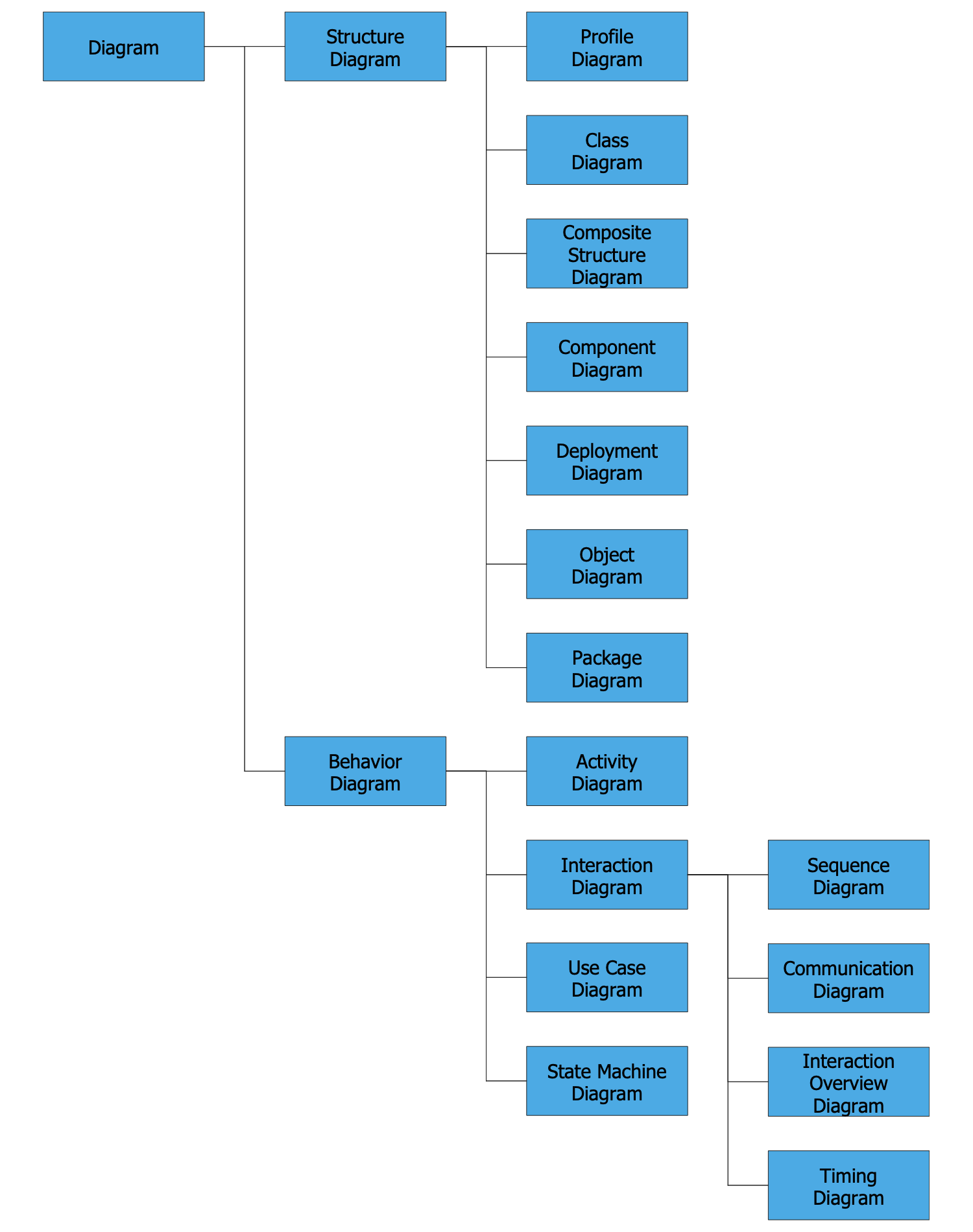 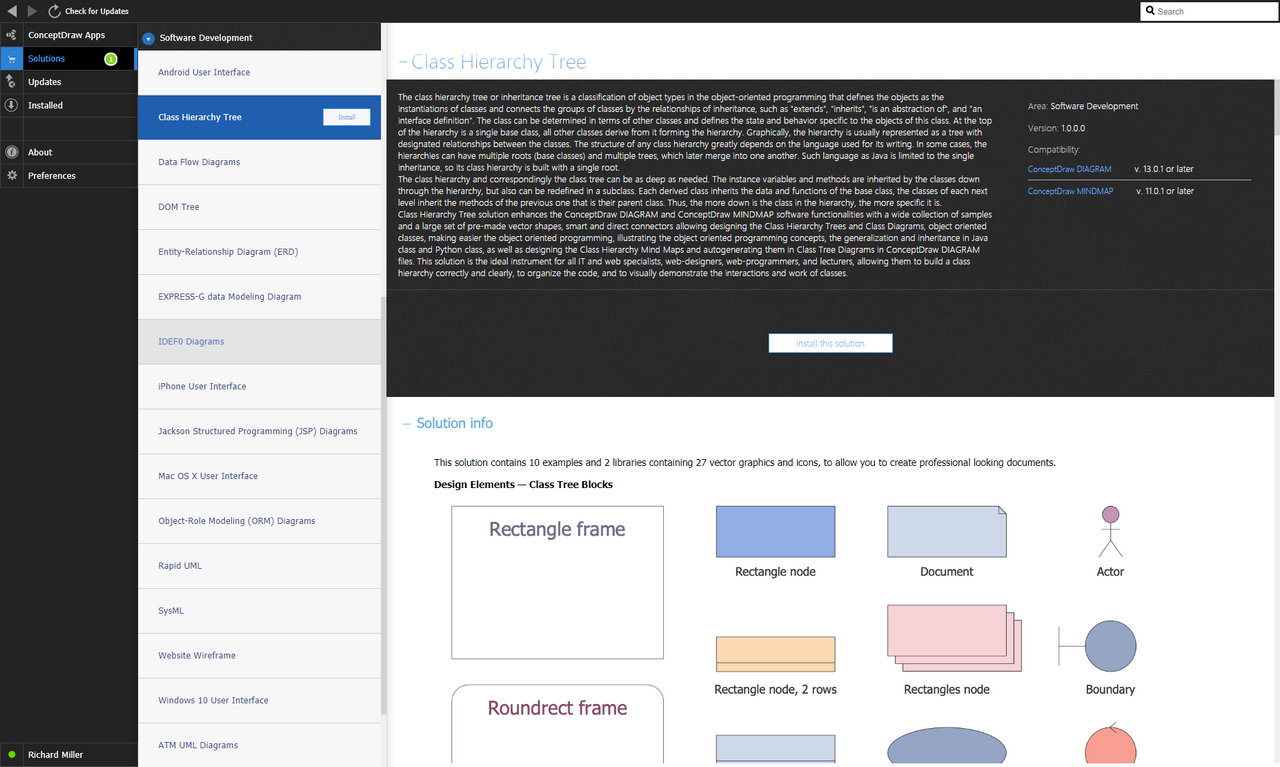 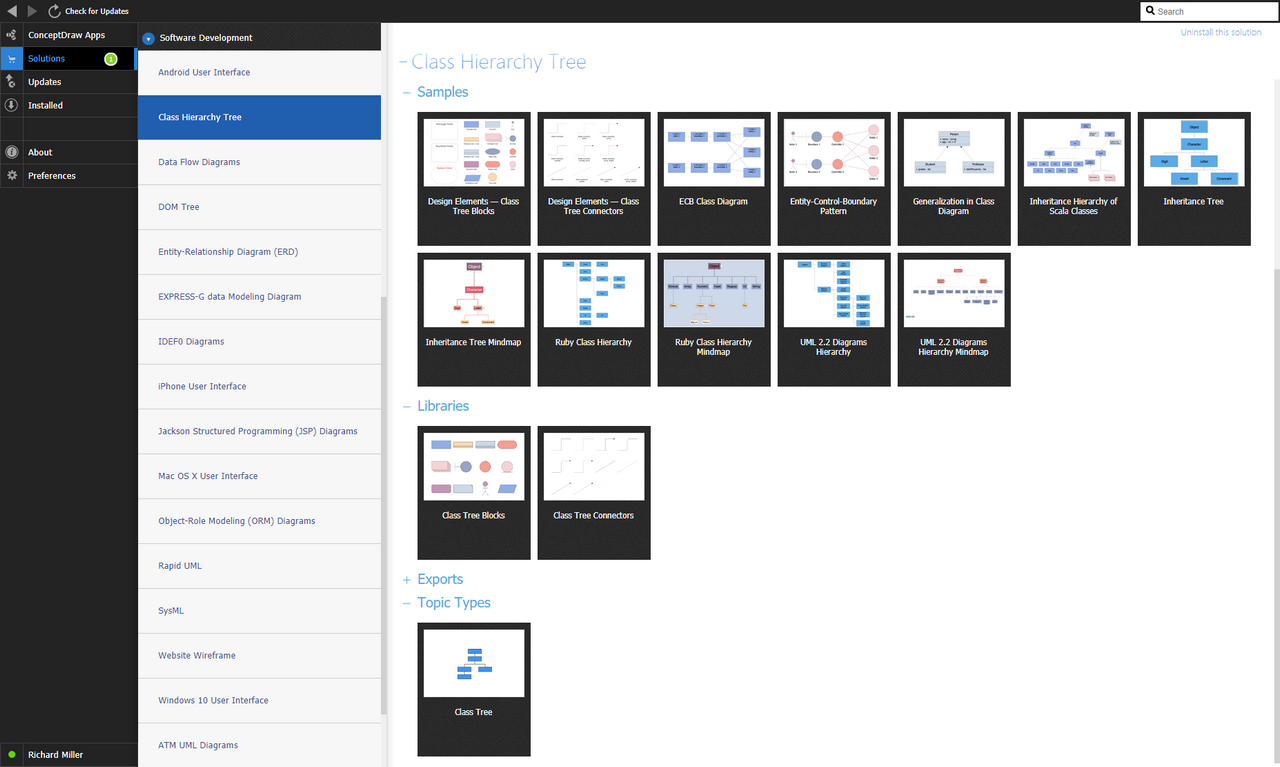 How to Create a Class Hierarchy Tree Diagram