A floor plan is a drawing that can be created in ConceptDraw DIAGRAM in order to show a view from above as well as of the relationships between spaces, rooms and other physical features at one level of a structure. The dimensions can be usually drawn between the walls for specifying the room sizes, as well as the wall lengths. Floor plans can include details of fixtures like sinks, furnaces, water heaters and other necessary features, as well as the notes for construction to specify construction methods, finishes, or symbols for electrical items.

A floor plan should be created taking into consideration that it is not a birds’ eye view or top view. It is a measured drawing used for scaling of the layout of a floor in a building. A floor plan should be made for showing the interior walls and hallways, restrooms, windows and doors, appliances (e.g., stoves, water heater, refrigerators, etc.), interior features and other.

Making a building plan such as a plant layout one it is important to remember that a plan view should eventually look like an orthographic projection of a three-dimensional object from the position of a horizontal plane through the object. Thus, a plan can be called as a section that can be viewed from the top. As a result, the portion of the object above the plane (section) is known to be omitted in order to reveal what is beyond it. Also, while creating a floor plan, the roof, as well as the upper portion of the walls, may be omitted too.

Roof plans can be also known simply as the orthographic projections, but they are not sections as their viewing plane is usually outside of the object.

Being a common method of depicting the internal arrangement of a three-dimensional object in two dimensions, a plan can be the one of a plant where all the equipment and rooms are drawn in details. Any technical building plan can be often used in technical drawing, being traditionally crosshatched. The style of crosshatching may indicate the particular type of material that the sections pass through.

Plant Layout Plans solution can be used for power plant design and plant layout design, for making the needed building plant plans and plant layouts looking professionally good. Having the newest plant layout software, including both the pre-made templates and examples of the plant layout plans, as well as the stencil libraries with the design elements, that can be also used for adding them to the plan, you can create the professionally looking drawing within only a few minutes.

Being useful for architects, the plant design solutions and in particular the Plant Layout Plans solution may be also useful for electricians, interior designers, builders, telecommunications managers, plant design engineers, and other technicians.

There are 3 stencil libraries containing 66 vector shapes for plant design. 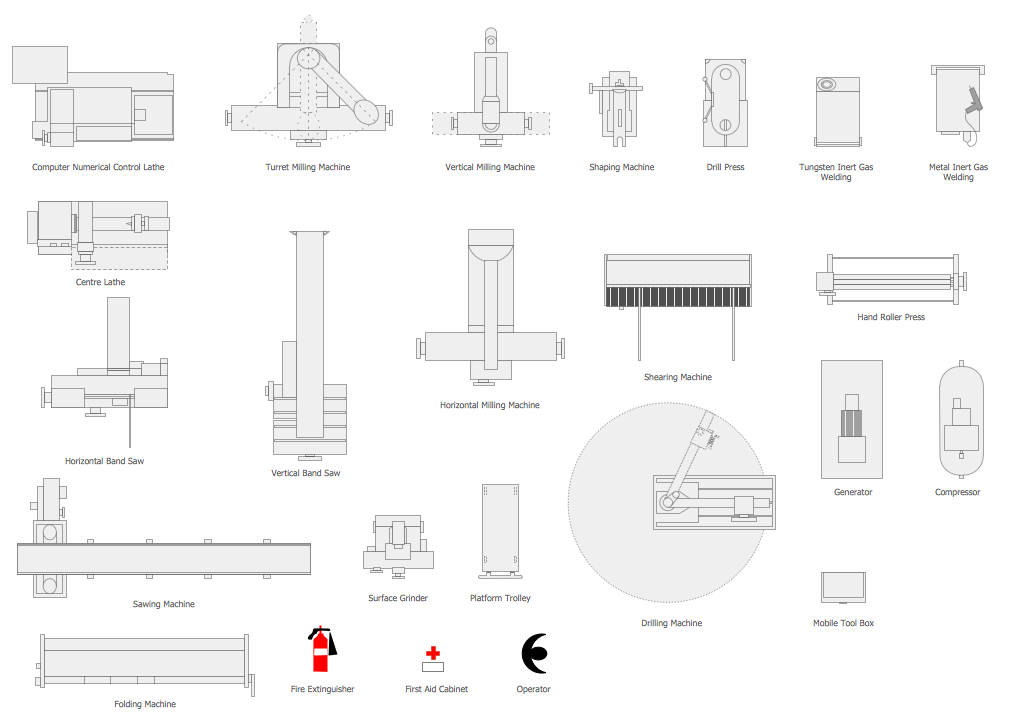 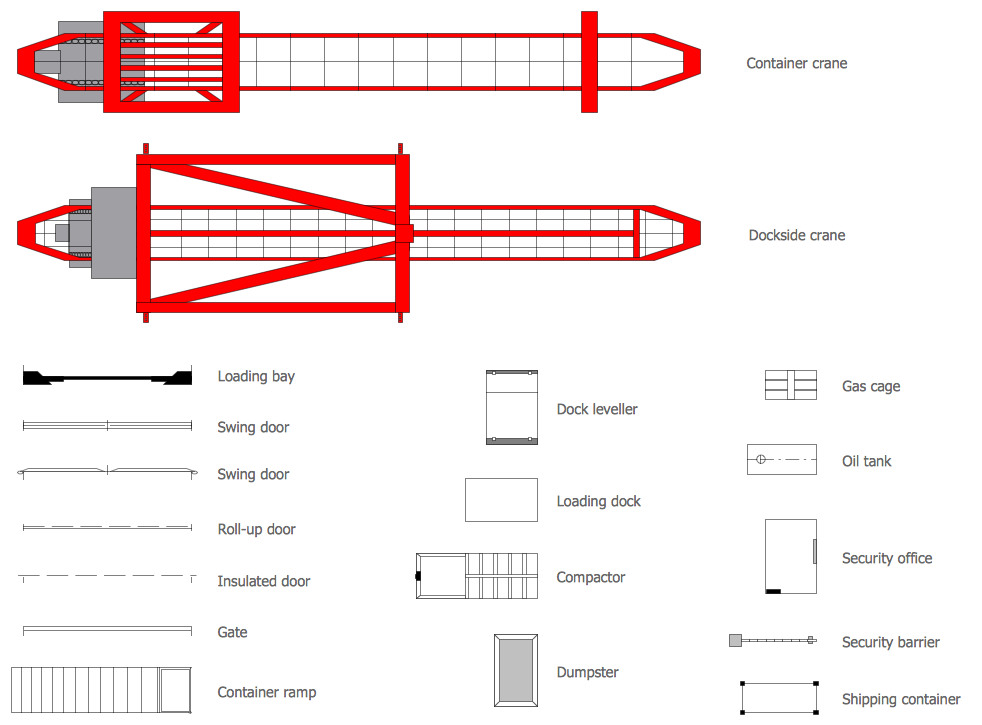 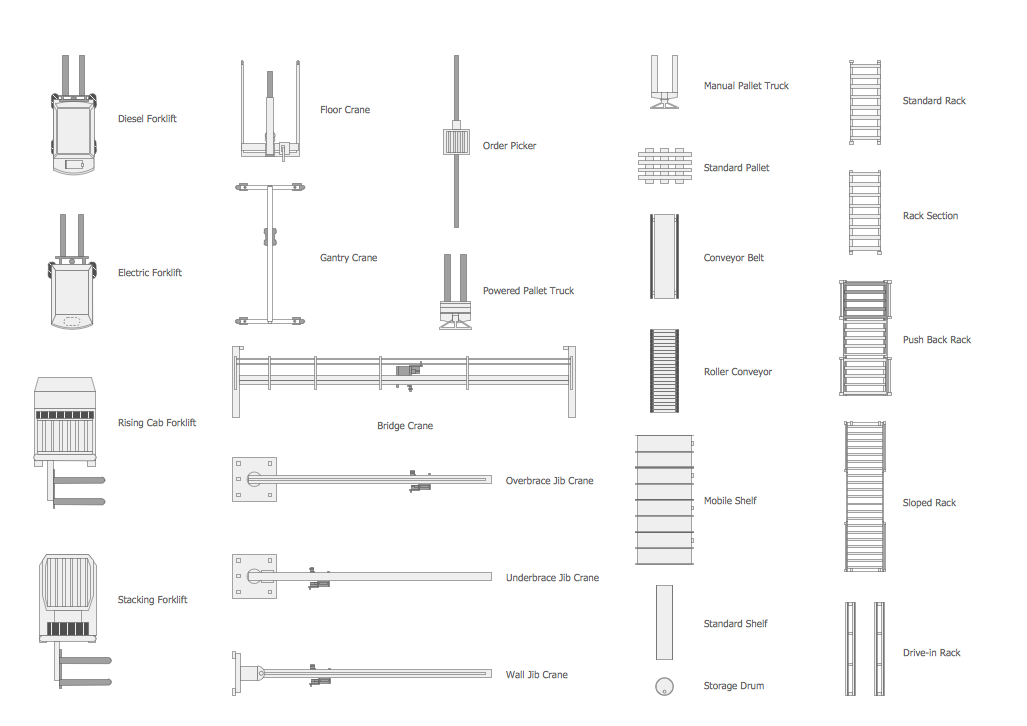 There are a few samples that you see on this page which were created in the ConceptDraw DIAGRAM application by using the Plant Layout Plans solution. Some of the solution's capabilities as well as the professional results which you can achieve are all demonstrated here on this page.

This sample diagram displays the distribution center layout plan. Typically, the different goods are delivered and stored in warehouses of varied size from where they are distributed in prescribed places. A lot of specialists of multifarious directions are involved in this process — manufacturers, importers, exporters, logistic and transport companies, wholesalers, customs, etc. As a rule, the warehouses and distribution centers are the large solid buildings located on a vast territory, often far from the small cities or in close proximity to the sea ports, railways, airports, etc. The place of location, the exact address and other data can be also specified on the plan. The plant design solutions developed for ConceptDraw Solution Park are helpful for quick and easy plant design and plant layout design, distribution centers planning and warehouses plans development. Be sure of it and use obligatory the ConceptDraw DIAGRAM with Plant Layout Plans solution in your work activity. 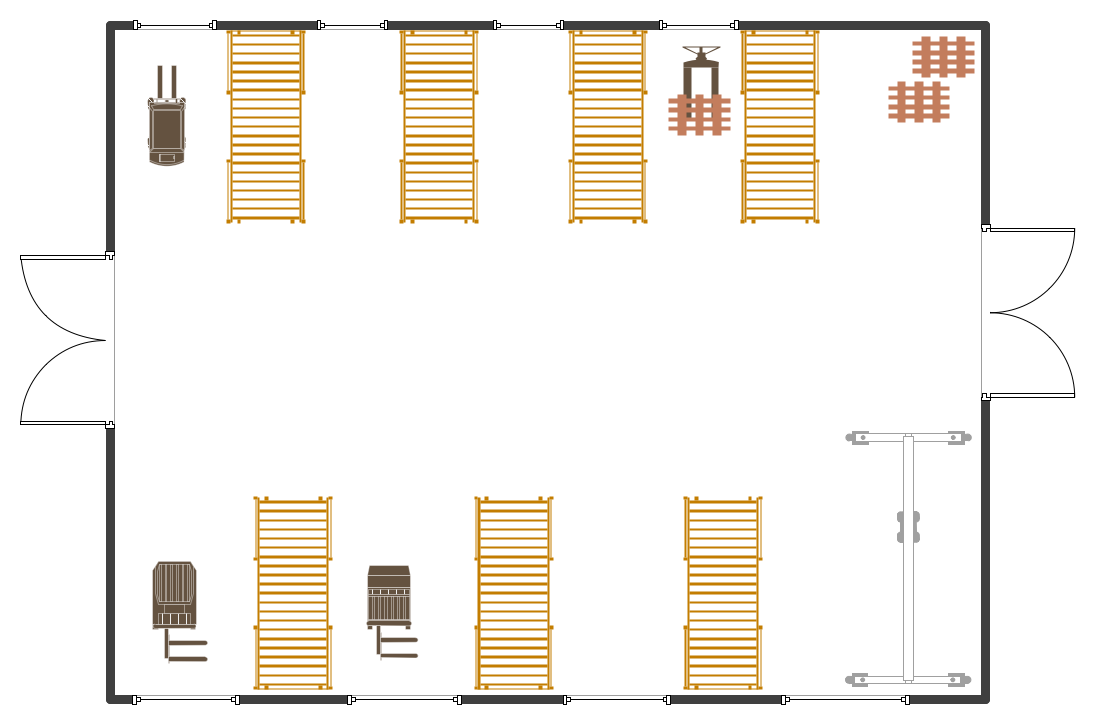 This diagram was created in ConceptDraw DIAGRAM using the combination of libraries from the Plant Layout Plans Solution. An experienced user spent 5 minutes creating this sample.

A factory or a manufacturing plant is an industrial premise, which includes specific machines and equipment used for processing one product into another and for manufacturing different goods. This sample shows the placement of manufacturing machines and equipment in industrial premises, in the plant warehouse. The Plant Layout Plans Solution offers the libraries with a large quantity of predesigned vector objects perfect for the power plant design. Having the ConceptDraw DIAGRAM, you can develop the plans of small private plants and large factories with heavy equipment, extensive assembly lines. Choose the required equipment from solution's libraries and arrange it on the plan as you like, in the order of planned use during the realization of the production cycle. Moreover, you can easily display in action a working process occurring in a factory by adding the workers' figures near those machines and equipment that require a human intervention; the human figures are also available from the ConceptDraw libraries. 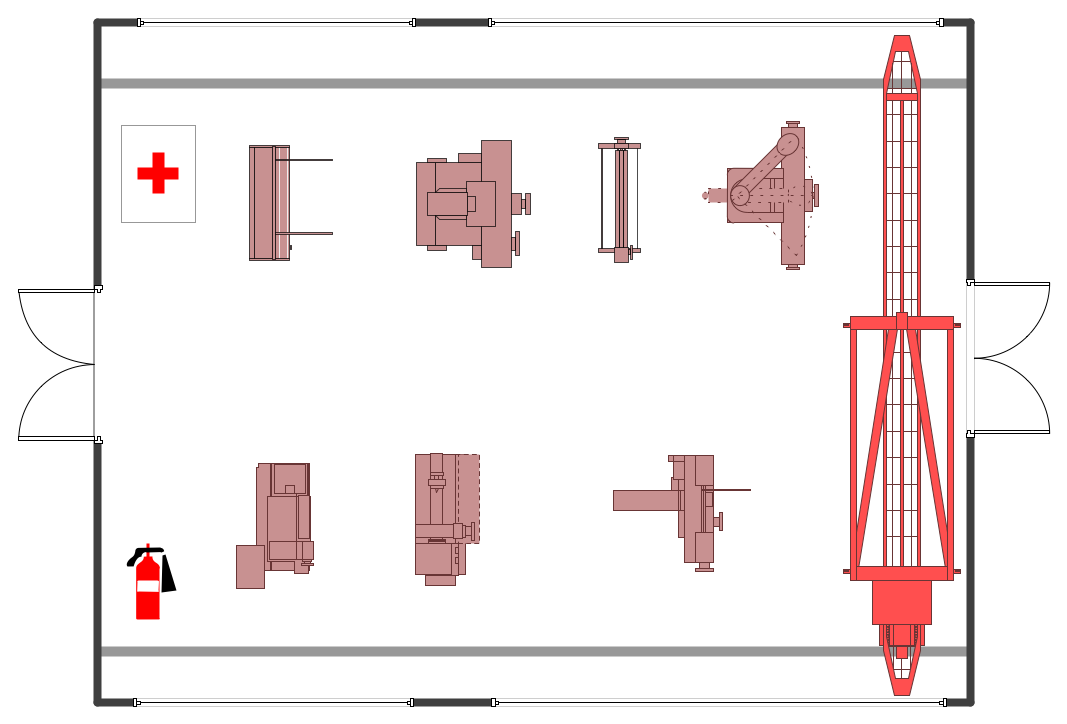 With ConceptDraw DIAGRAM powerful plant layout software, you can design any shipping, receiving or storage floor plan in just minutes. Simply drag the ready-to-use objects from the corresponding libraries of the Plant Layout Plans Solution and arrange them to suit the technological plan or production process. The represented premise is a commercial building, it is the most common type of similar buildings in limits of the cities and typically used for commercial purposes. The ConceptDraw DIAGRAM vector graphics software allows planning the small enterprises and the plants of a full cycle — which provide all stages of manufacturing processes from the receiving materials, processing them, and production goods to storage them in warehouses and shipment to the end consumer. The zoning of the industrial premises and manufacturing facilities is very useful and is able with ConceptDraw's tools. Plan easily each floor of your production enterprise or plant building in ConceptDraw DIAGRAM software. 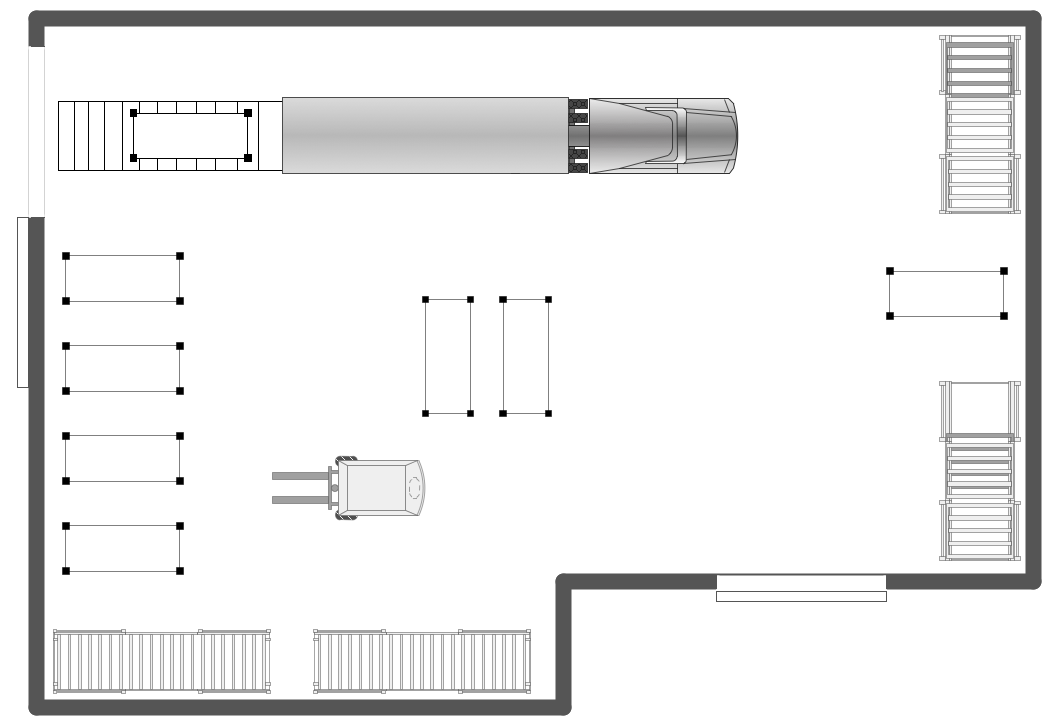 This floor plan example shows a warehouse equipment layout floor plan. It is based on the same named slide from the presentation published on the website of Portland State University and its School of Business Administration under the name "Operations Management. Layout Strategy. Chapter 9". The represented conveyor system is a widespread part of the mechanical handling equipment that is used to move materials from one location to another during the production cycle, as well as in handling and packaging industries. This type of equipment is especially useful when transporting bulky and heavy loads and materials. The layout plan of the roller conveyors, box vans, standard racks, shipping containers, and swing doors is represented. The places of location the order pickers are also marked in this diagram. You want to design a layout floor plan of a warehouse, workshop or any other site or structure? A better plant design software than ConceptDraw DIAGRAM program you will not find! 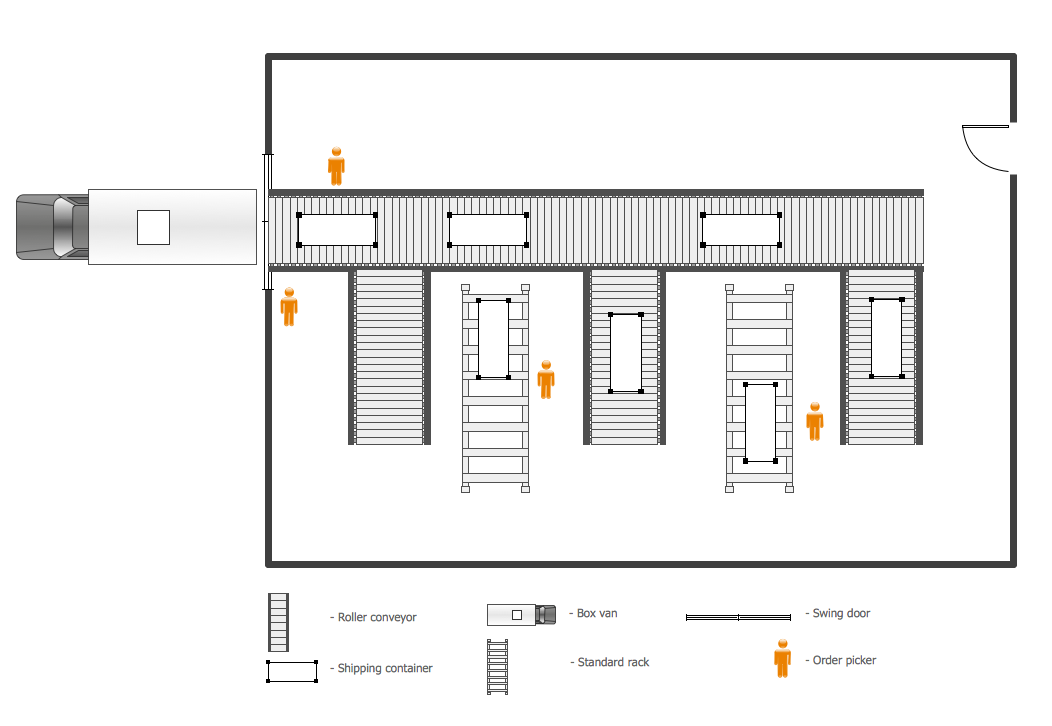 This sample illustrates the layout plan of the Warehouse Security Quiz that was created basing on the plan from the website of the School of Criminal Justice located at the Rutgers University. The safety of goods during their transportation to and from the warehouse, as well as especially during their storage in the warehouse requires a clear accounting of all positions and quantities, as well as a good security system, system of control and monitoring of the actions taking place within the warehouse and in the immediate vicinity to it. Not allowing the vulnerability of the goods and taking the necessary measures for this, you can provide its safety. Easy process plant layout and piping design of any complexity isn't a problem — now it is a reality with the Plant Layout Plans Solution. The predesigned objects from other ConceptDraw Solution Park libraries can be also added to make your plans even more beautiful and visual. 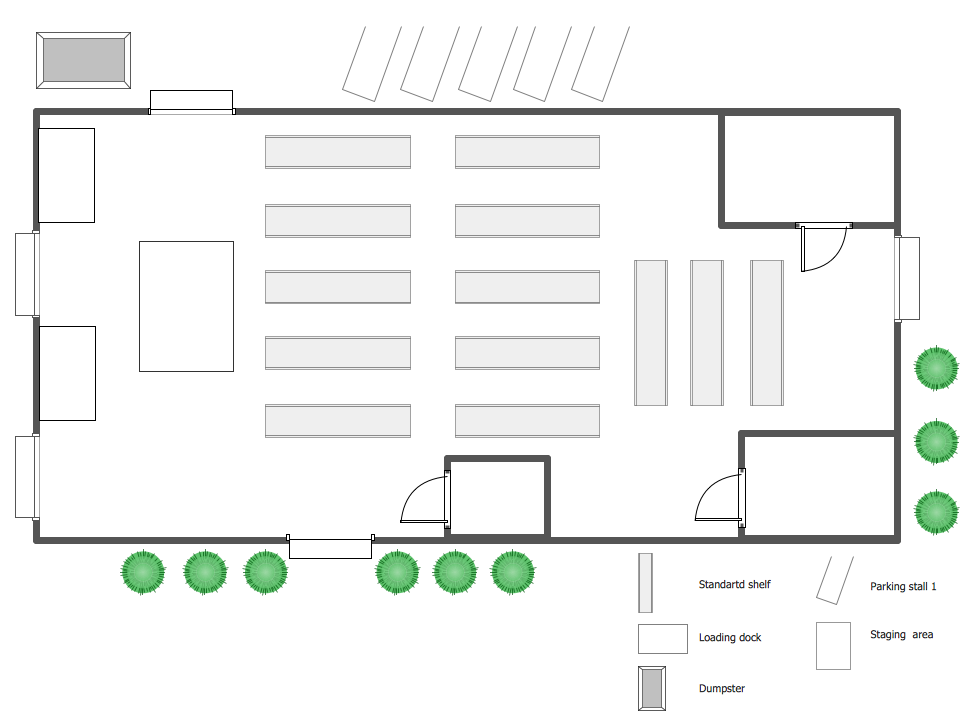 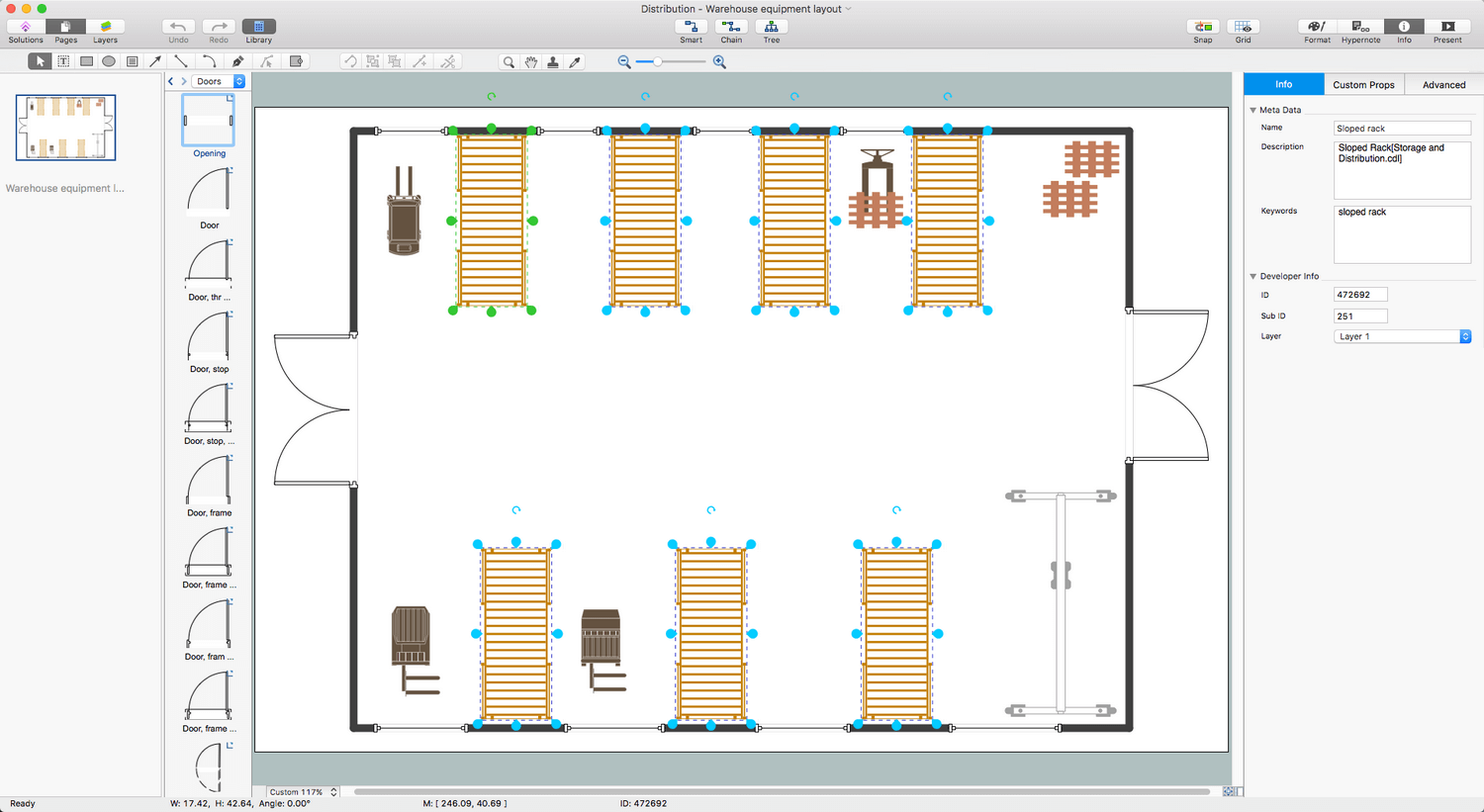 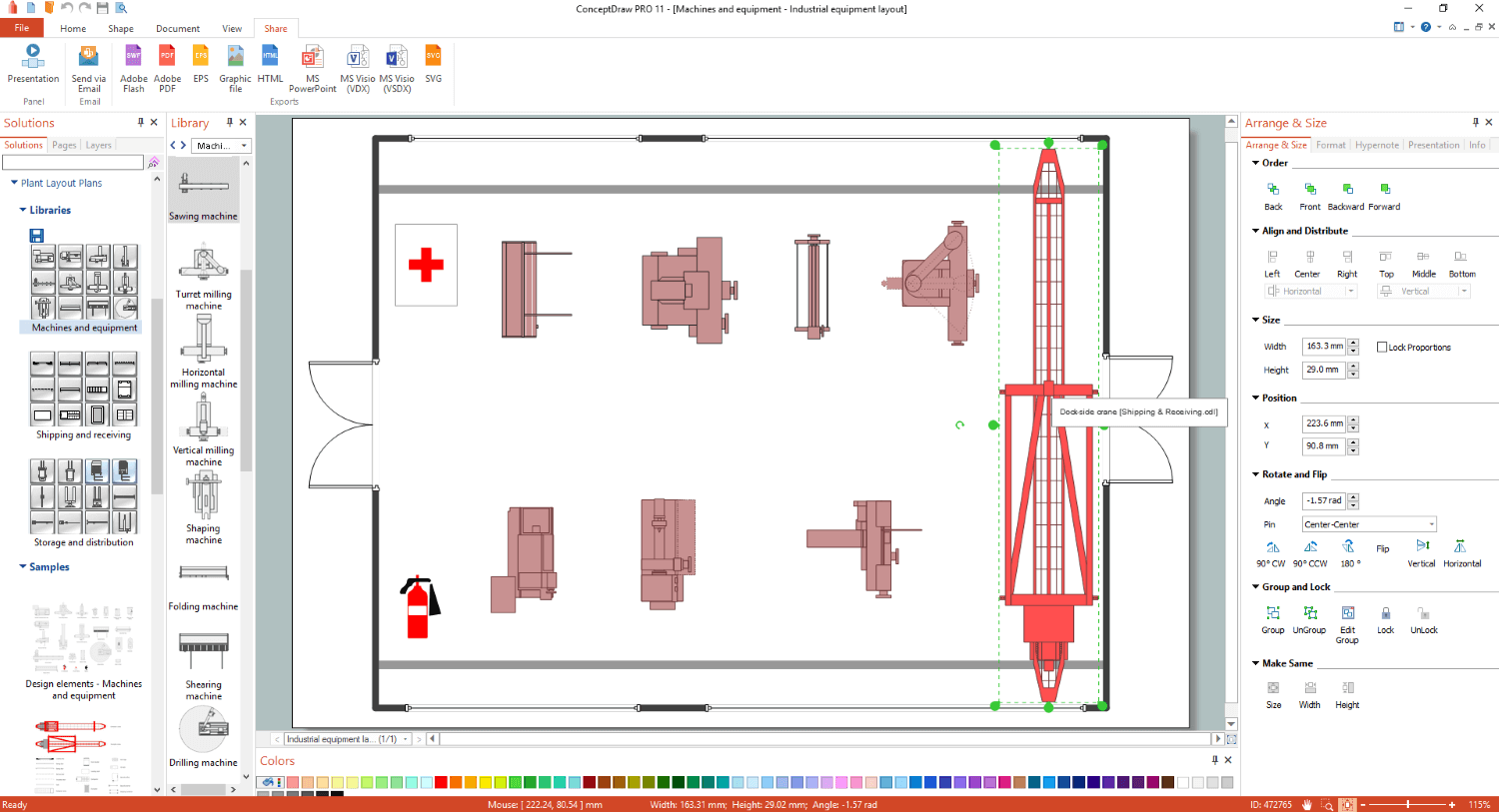 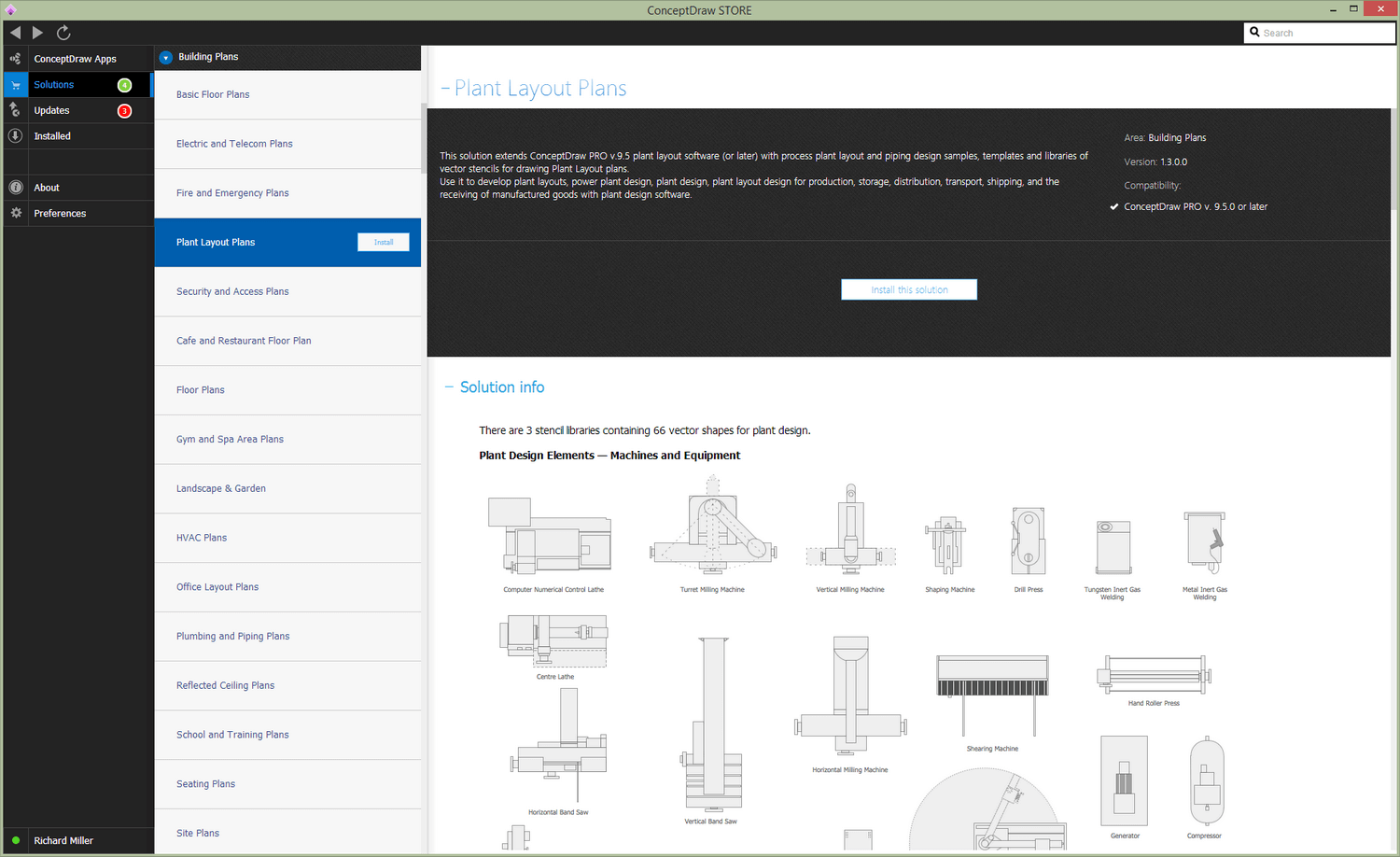 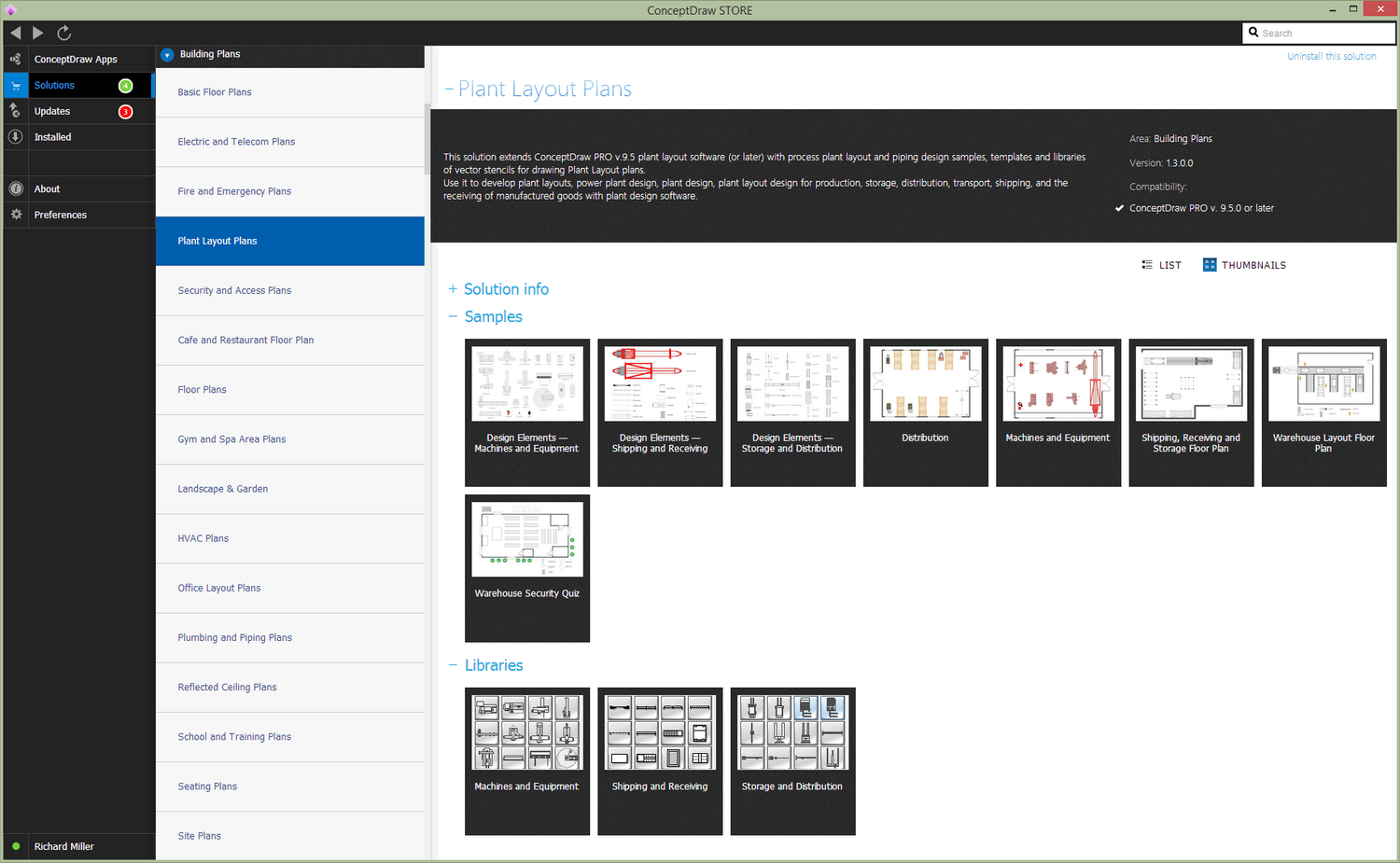 How to Create a Plant Layout Design