A work of art in the visual arts is known to be a physical object that may be either two- or three- dimensional. Being professionally determined to fulfil a primarily independent aesthetic function, a work of art may be an illustration that is a decoration, visual explanation or interpretation of some text, process or concept, designed for integration in published media. Widely used in posters, magazines, flyers, books, teaching materials, video games, films and animations, illustrations can be created in the ConceptDraw DIAGRAM diagramming and drawing software as well as any clip art.

Clip art as one of the variations of art is a popular term in the graphic arts. It is pre-made images that can be used to illustrate any needed medium. Today, clip art is world-widely used coming in many forms, both printed and electronic. Clip art has greatly evolved to include a lot of different content, illustration styles, licensing restrictions and file formats. Being usually composed exclusively of illustrations, none of the clip art includes the so-called “stock photography”.

The Artwork solution as an extension to the ConceptDraw DIAGRAM application offers all its users the pre-made samples and templates of the professionally created illustrations as well as the stencil libraries full of vector clip arts depicting food, architecture, music, aquatic animals, funny animals, transport, and fauna. Assisting in creating illustrations in an artistic and fun style, all the ConceptDraw DIAGRAM users can use the Artwork solution for making the needed drawings to use for their documents, websites, and presentations.

There are 10 clipart libraries containing 462 vector images in the Artwork solution. 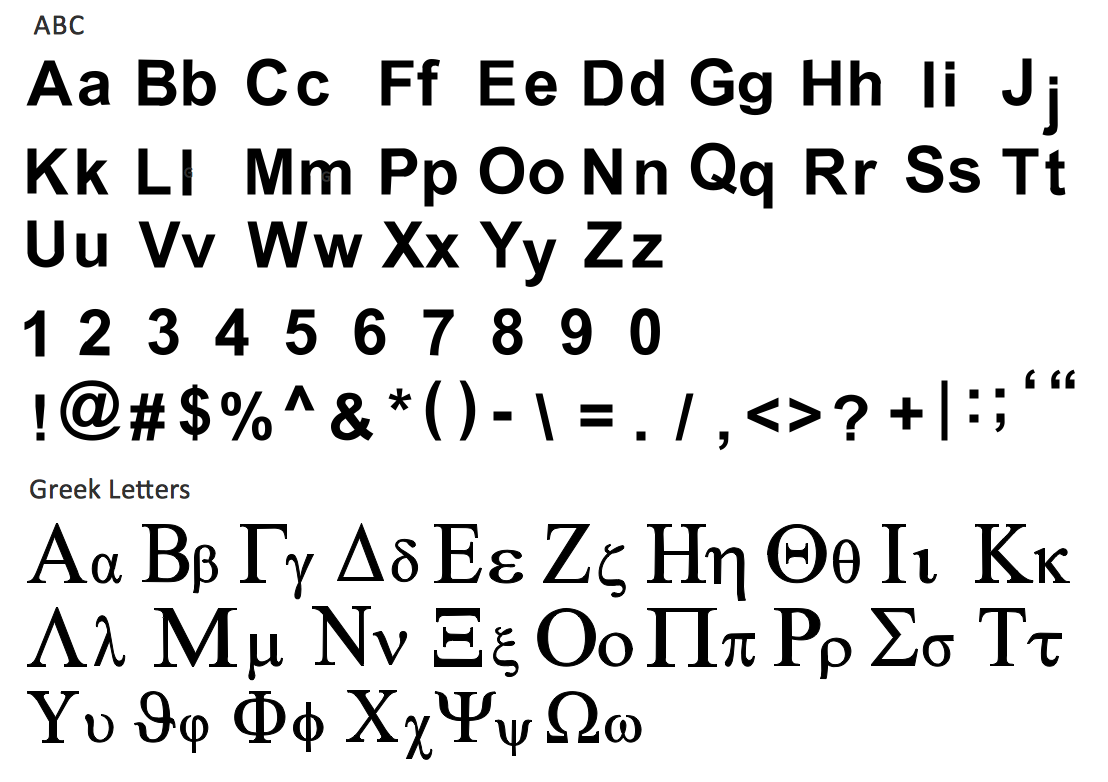 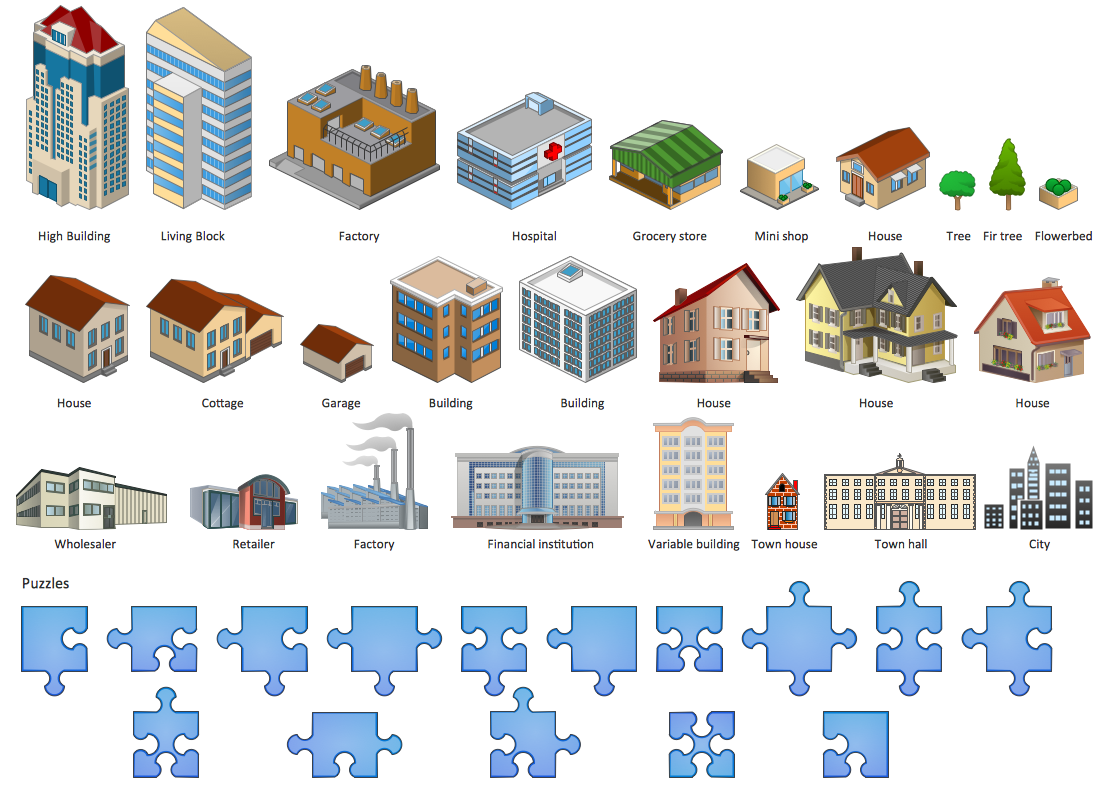 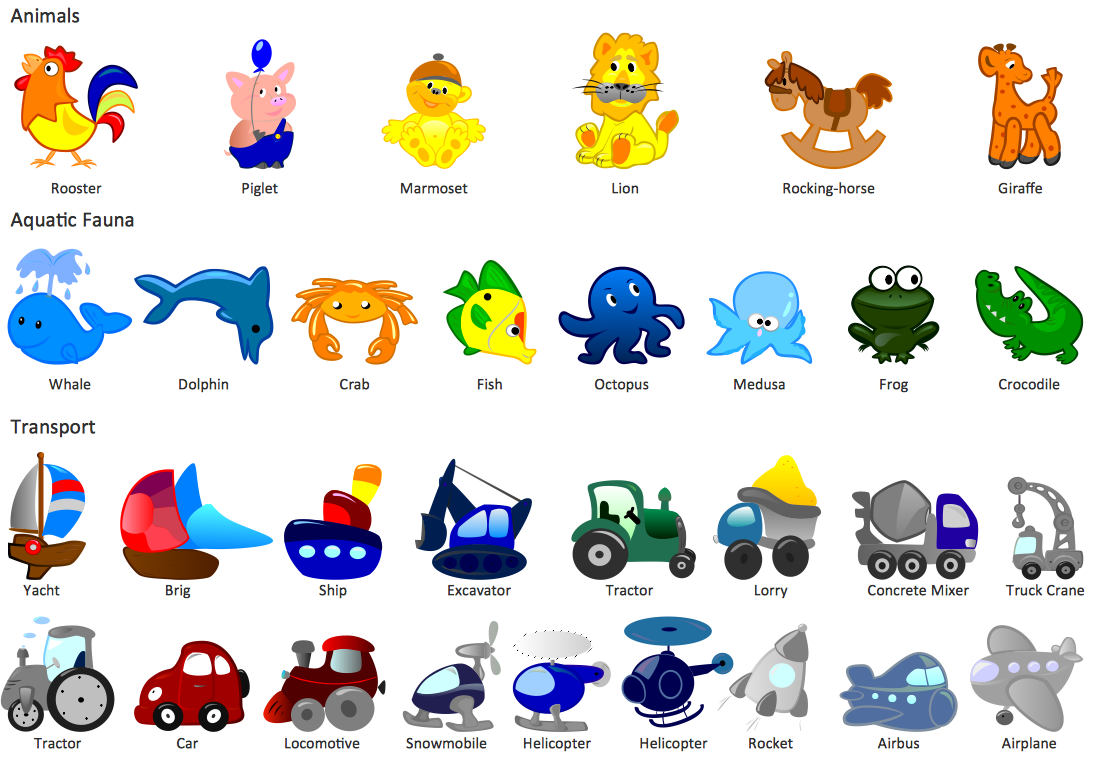 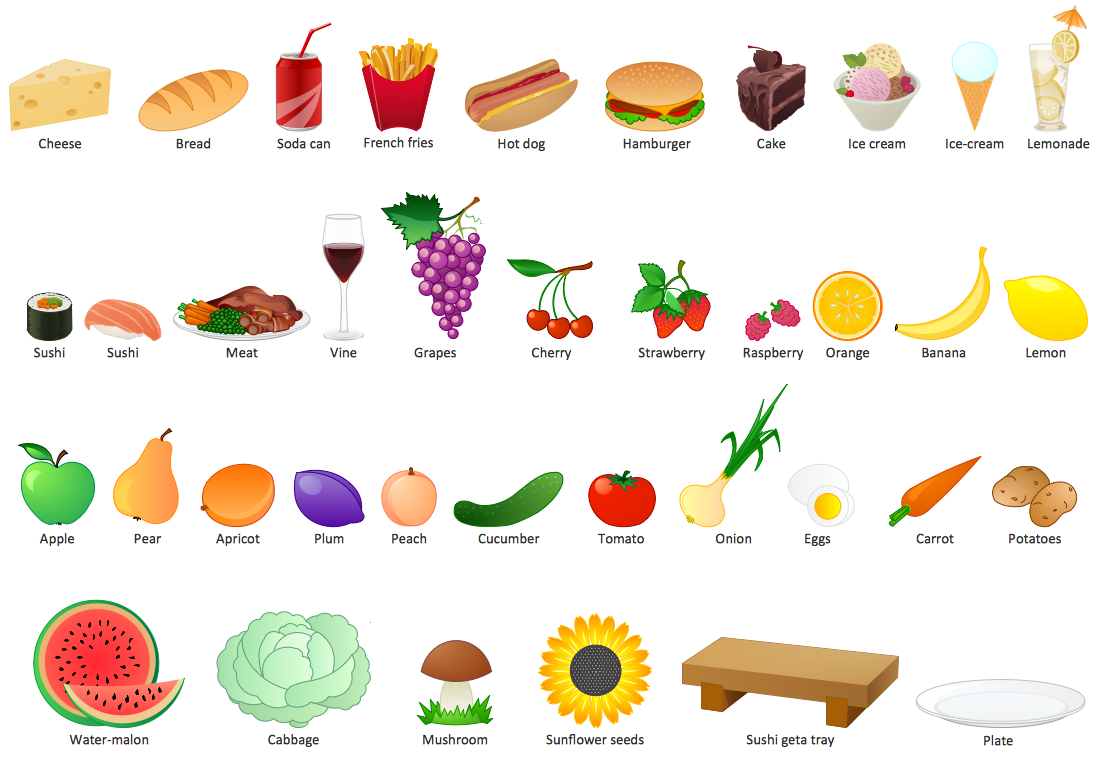 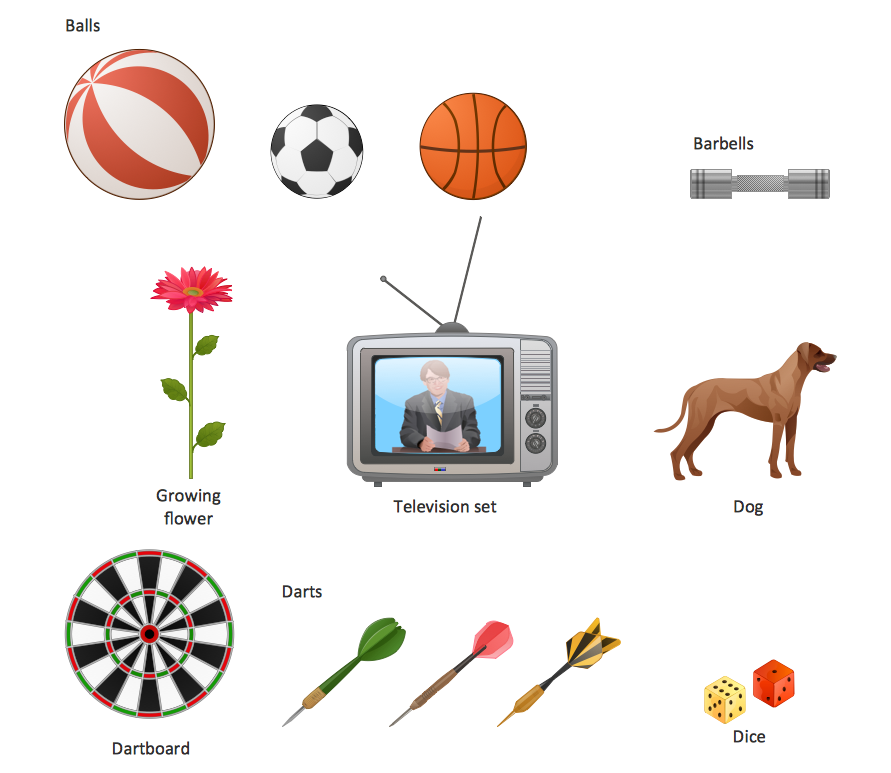 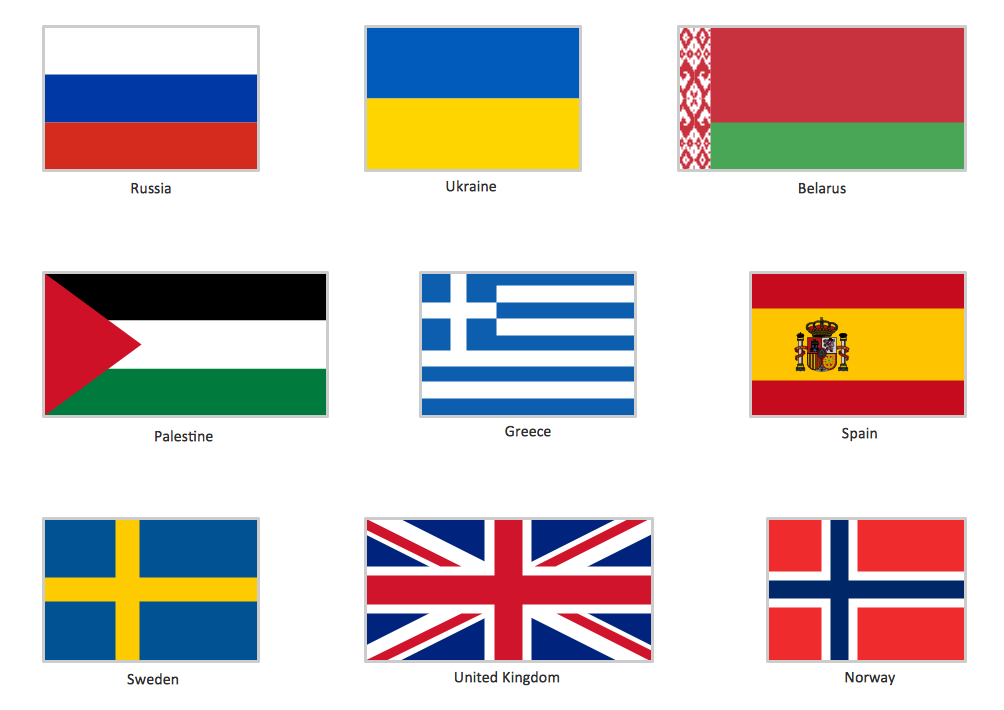 There are a few samples that you see on this page which were created in the ConceptDraw DIAGRAM application by using the Artwork solution. Some of the solution's capabilities as well as the professional results which you can achieve are all demonstrated here on this page.

This example was created in ConceptDraw DIAGRAM using the 'Funny Animals' library, from our Artwork Solution. An experienced user spent 40 minutes creating this sample. 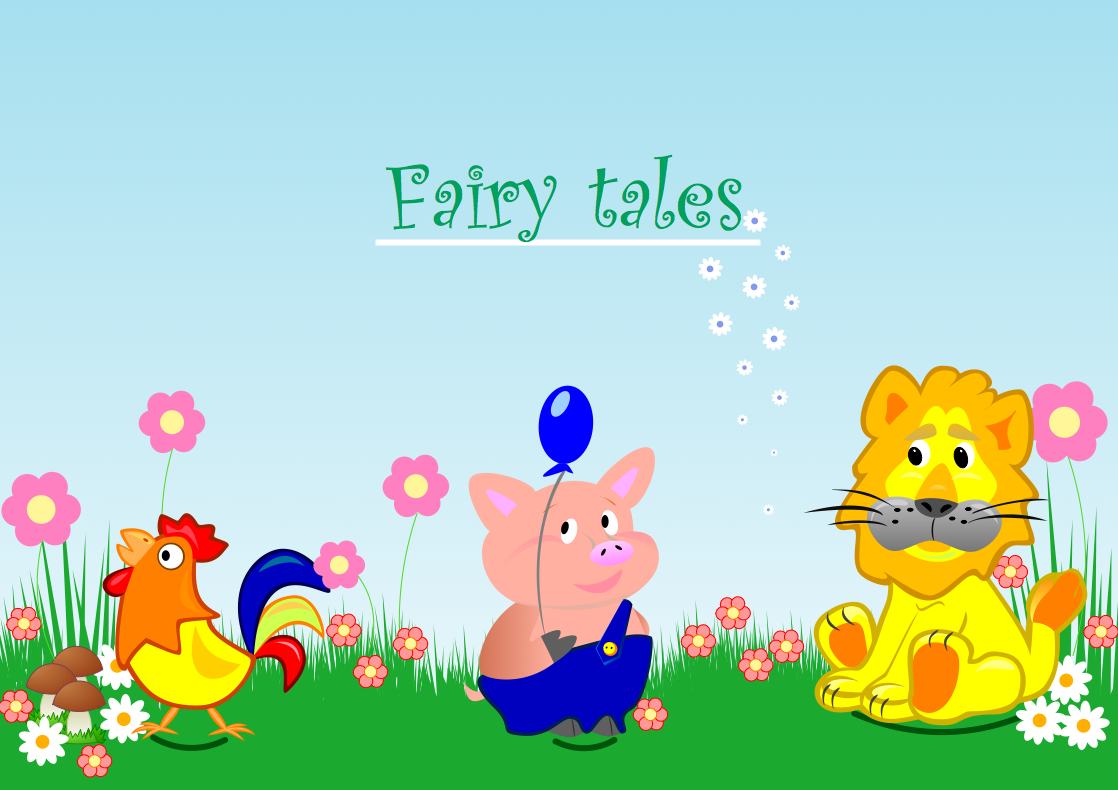 This example was created in ConceptDraw DIAGRAM using the 'Aquatic Fauna' library, from our Artwork Solution. An experienced user spent 25 minutes creating this sample.

Using the Aquatic Fauna library for ConceptDraw DIAGRAM can help you create professional-looking illustrations even if you are not an artist or designer. This library contains ready-to-use vector cliparts, which can be scaled for different paper or screen sizes. 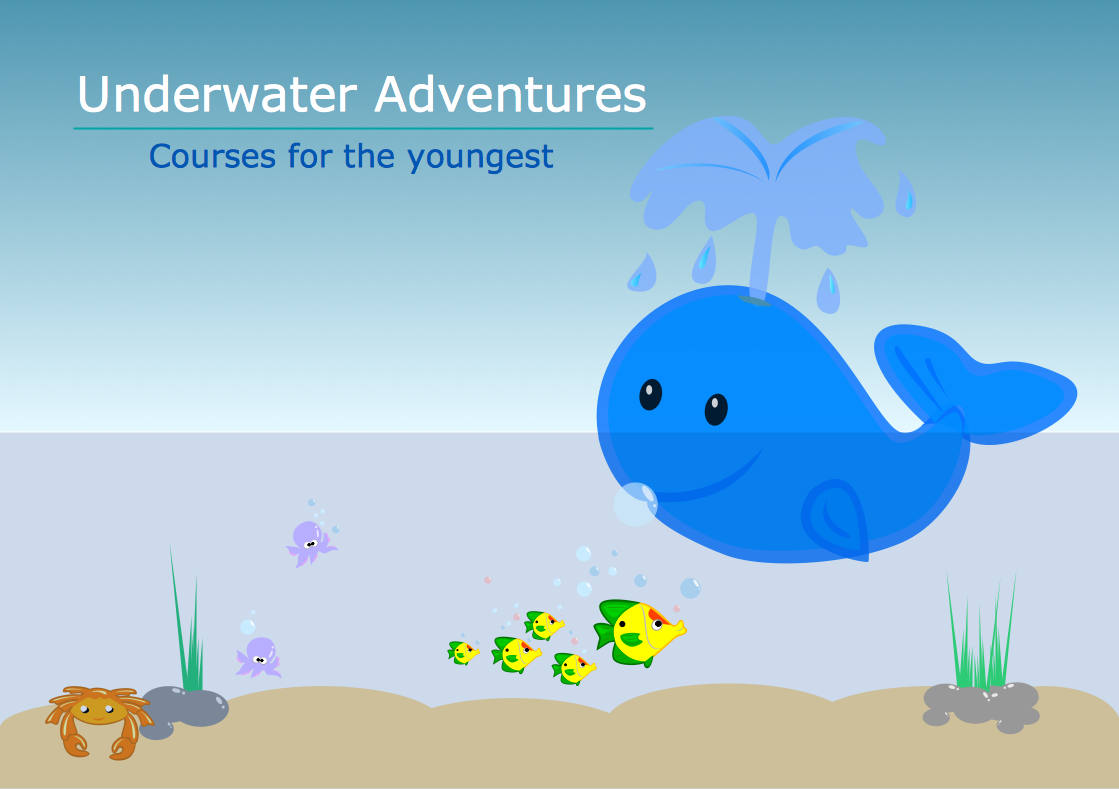 This example was created in ConceptDraw DIAGRAM using the 'Food' library from our Artwork Solution. An experienced user spent 35 minutes creating this sample.

This sample illustrates an eatery menu. Using the vector cliparts found in the 'Food' library, you can produce high-quality illustrations for use on menus and recipes, amongst other things. These illustrations scale properly for different paper and screen sizes. 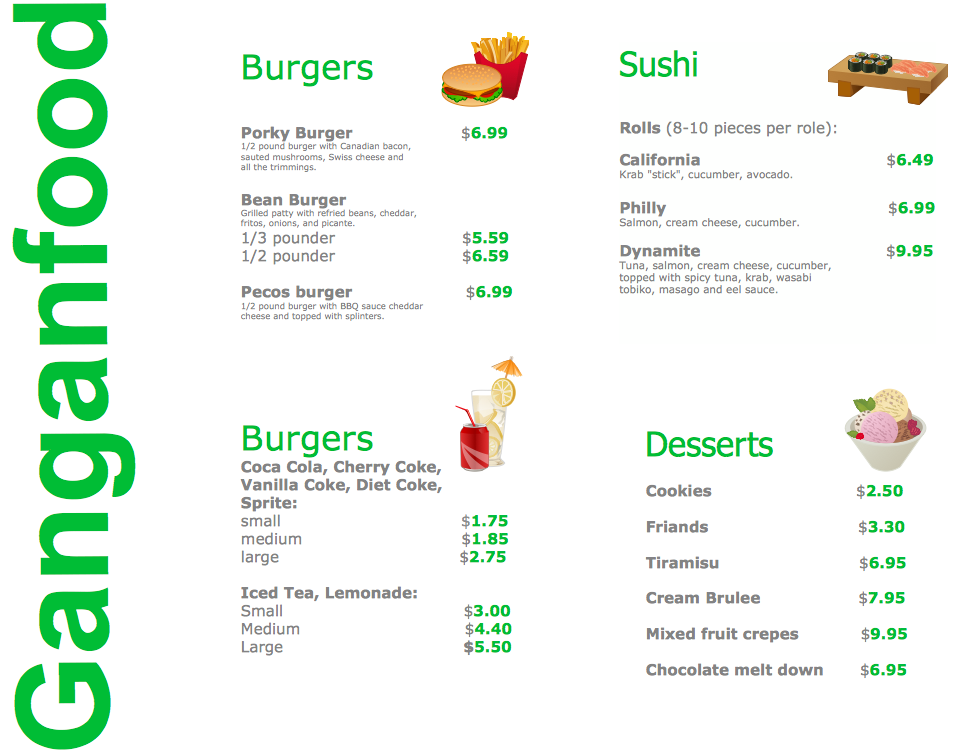 This example was created in ConceptDraw DIAGRAM using the 'Music' library from our Artwork Solution. An experienced user spent 15 minutes creating this sample.

Using the 'Music' library for ConceptDraw DIAGRAM allows you to create professional-looking thematic illustrations in seconds. The high resolution vector graphics are perfect for presentation needs, and usage on large screens. 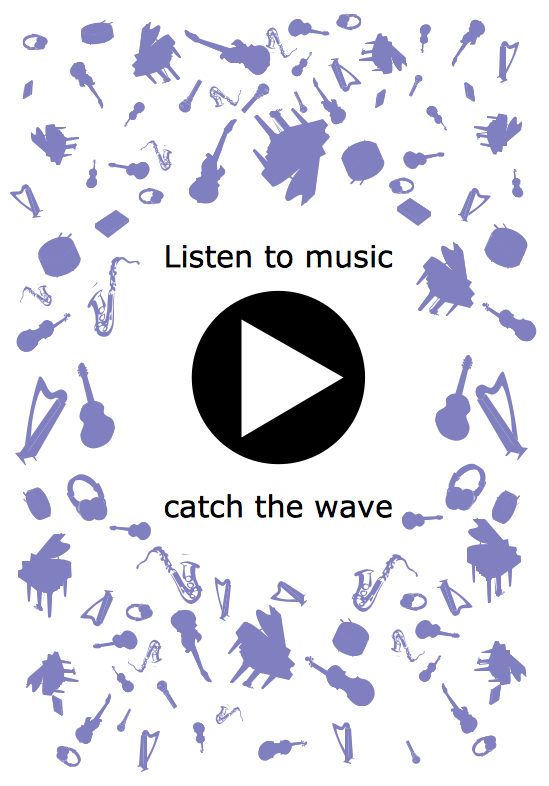 This example was created in ConceptDraw DIAGRAM using the 'Funny Transport' library from our Artwork Solution. An experienced user spent 30 minutes creating this sample.

This example illustrates the cover of a box for a children's puzzle. Using ready-to-use cliparts from the 'Funny Transport' library, anyone can create professional looking thematic illustrations. These illustrations scale properly for different paper and screen sizes. 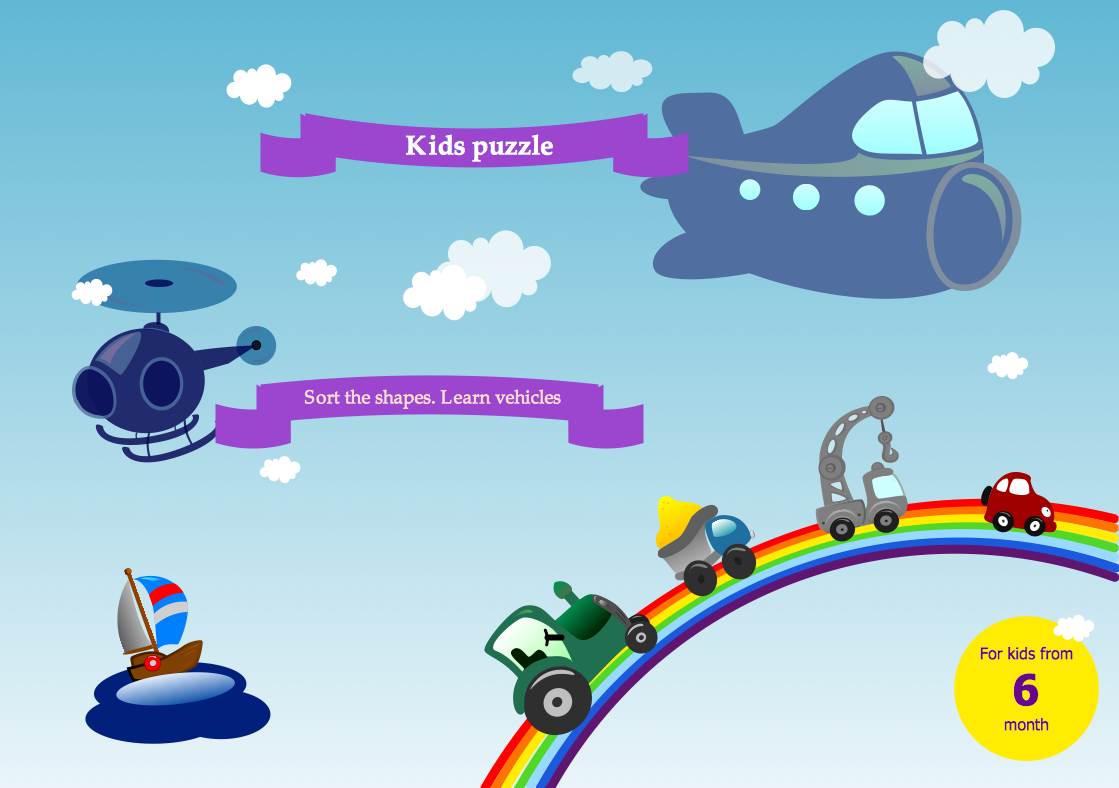 Example 6: Who in the World Eats Chocolate?

This example was created in ConceptDraw DIAGRAM using the 'State Flags' library, from our Artwork Solution. An experienced user spent 20 minutes creating this sample.

Which nation has the biggest sweet tooth? Using artwork from the 'State Flags' library, you can create professional looking images, that convey your message in a clear and striking manner. The clipart is scalable, allowing it to be resized with no loss in quality. 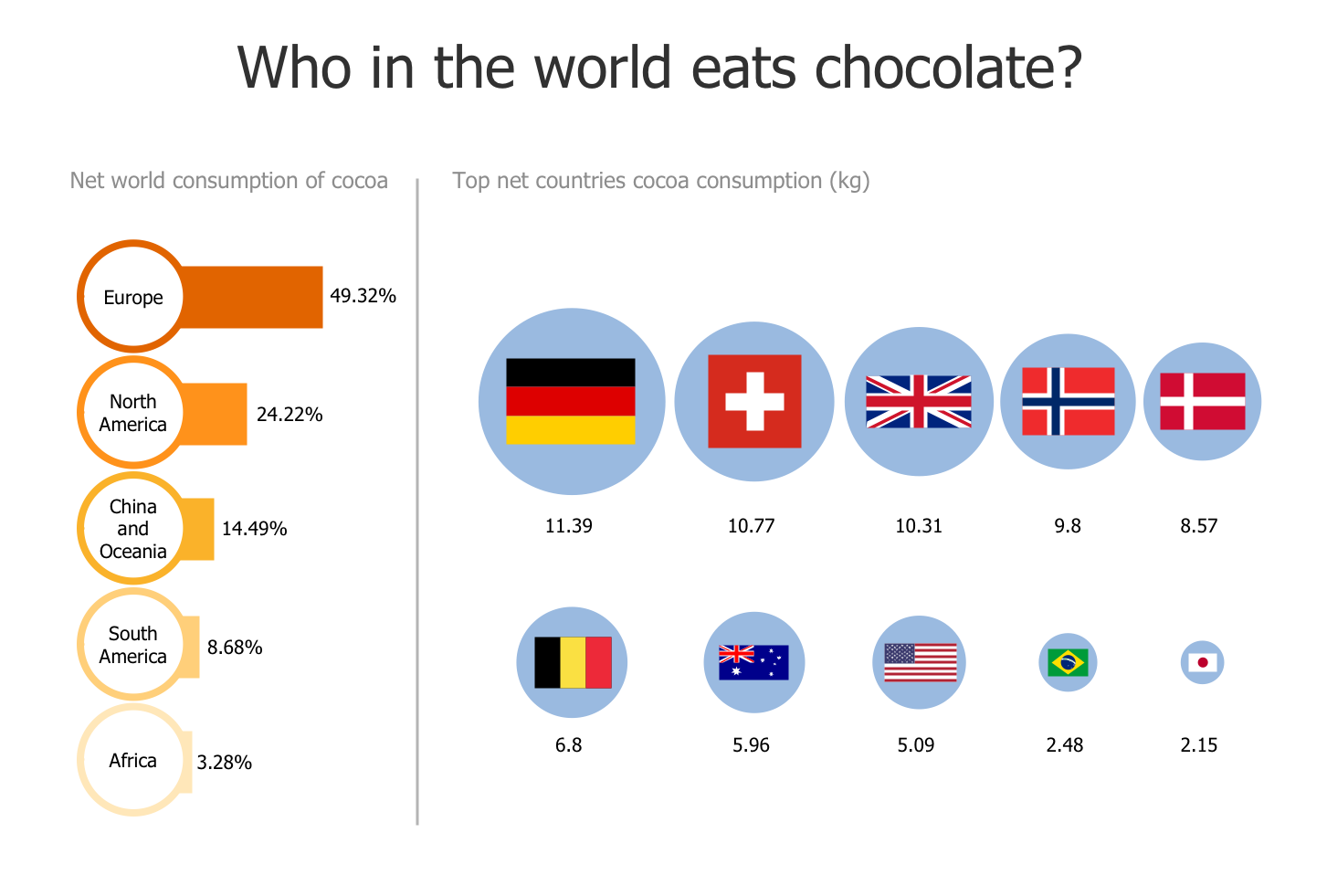 This Mind Map represents the model of the Banff Centre Competency, the principles and main components of the program of leaders' development in Canada. The Banff Centre Competency plays a great role in leadership learning and leaders' development process. The program was developed in collaboration with Canada’s National Theatre School in Montreal. Among the main directions requiring active work in the formation of the leader's personality can be listed: the self mastery including self consciousness, self development, self discipline, and self authorization, the futuring containing foresight, strategic action, out/in communication, and intention, the sense-making suggesting interactive thinking, disciplined inquiry, in/out communication, pattern recognition, as well as the design of intelligent action supposing perspective, sensibility, stabilizing & destabilizing strategies, and commitment, the aligning people to action including creating capacity, engaging others, understanding others, and attracting resources, and the adaptive learn containing reflexive learning, creating generative space, recognizing challenge, and leveraging knowledge forward. 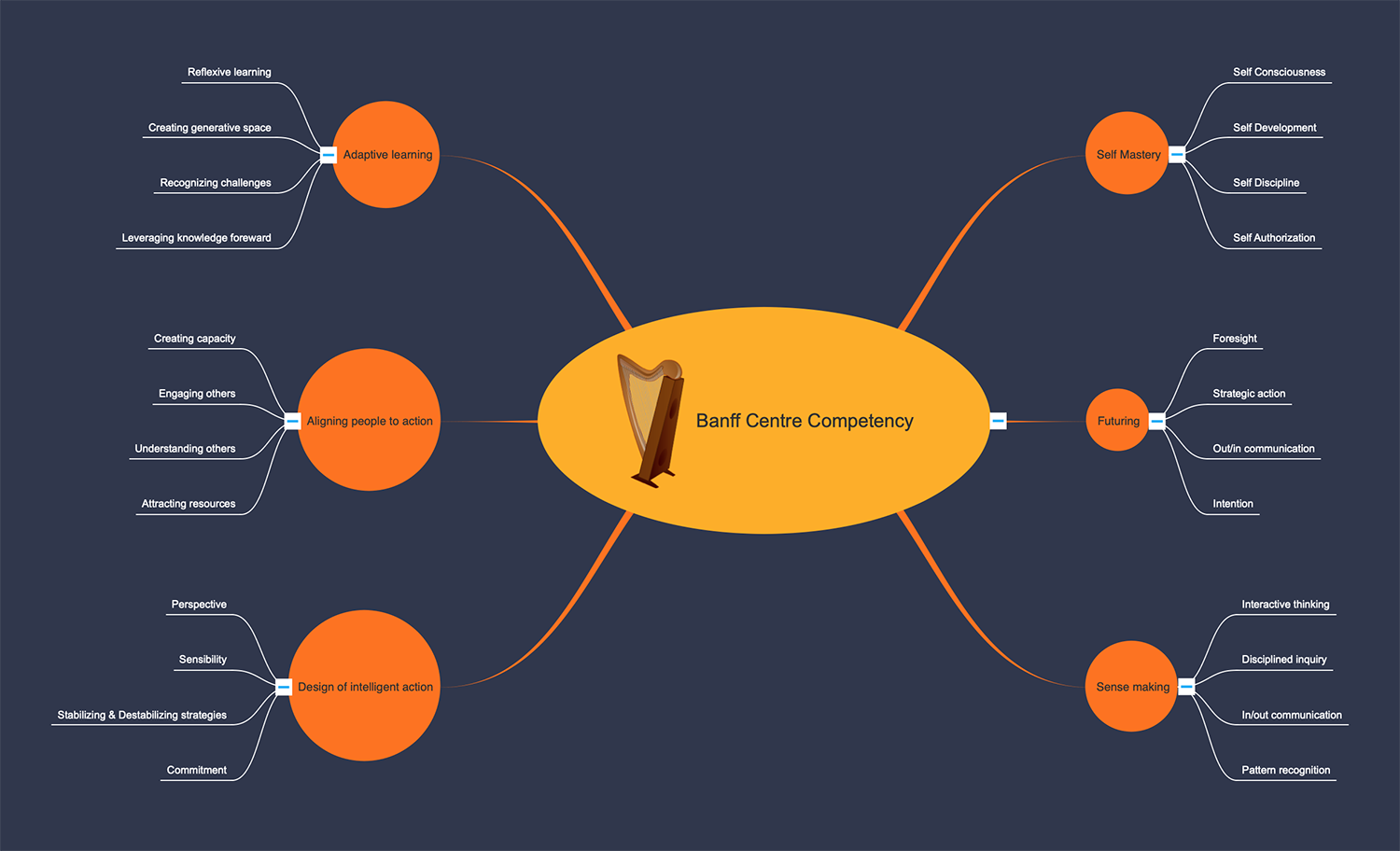 This Mind Map sample represents a variety of countries that are the members of the European Union (EU). For representing them on the map not only their names were used but also the corresponding flags icons. The country’s flag uniquely identifies the country and makes it immediately recognizable on the map. The European Union also has its own flag that includes 12 gold five-pointed stars arranged in a circle on a blue background, similar to the numbers on the watch face, you can observe EU flag into the main idea. The European Union is a union of 28 member states that are located primarily in Europe. Among the countries members are Austria, Italy, Belgium, Latvia, Bulgaria, Lithuania, Croatia, Luxembourg, Cyprus, Malta, Czech Republic, Netherlands, Denmark, Poland, Estonia, Portugal, Finland, Romania, France, Slovakia, Germany, Slovenia, Greece, Spain, Hungary, Sweden, Ireland, and United Kingdom. This is the best example to sight the whole EU structure on one page. 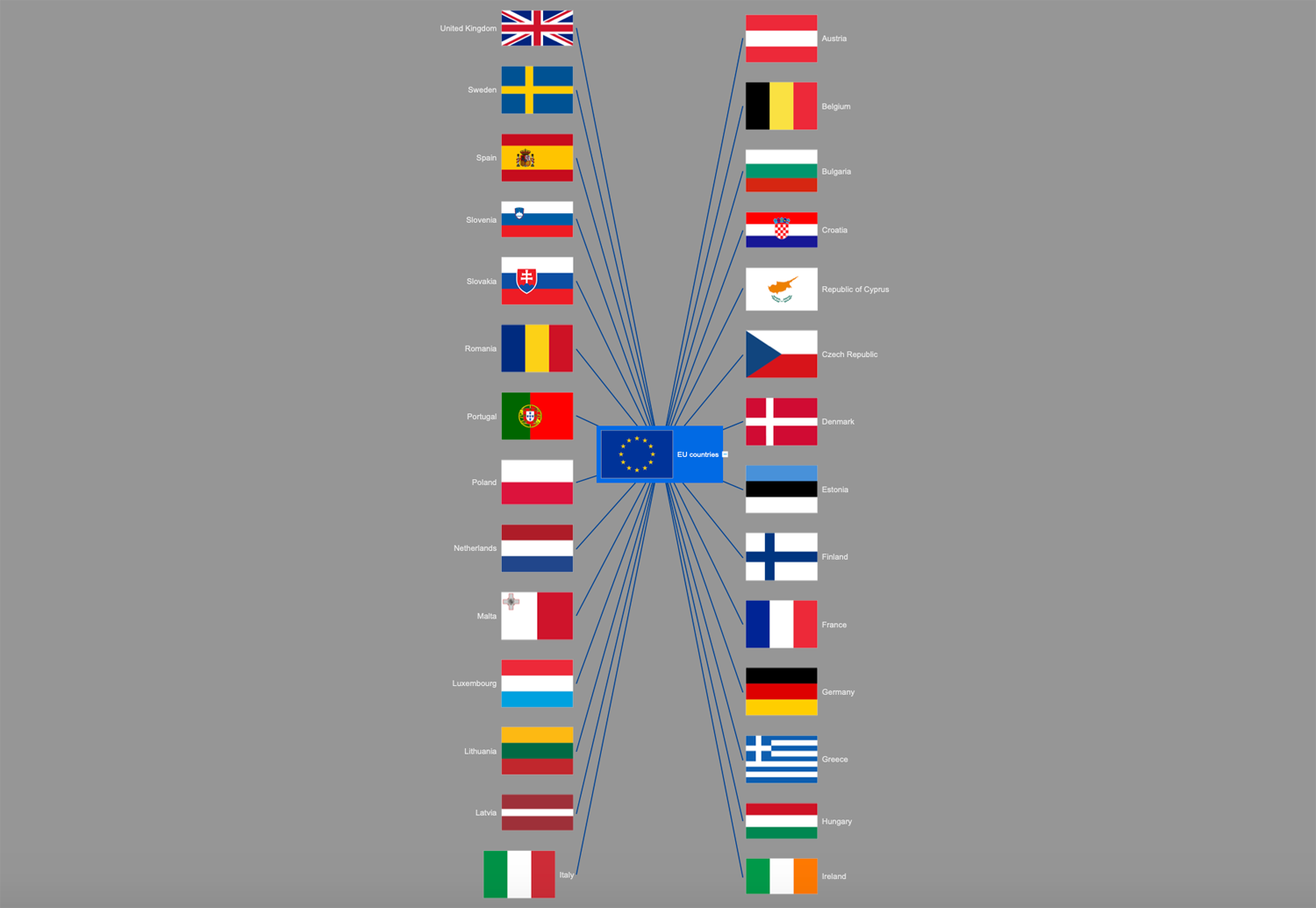 This Mind Map sample illustrates the main components of the Macedonian Salad, which is a traditional dish of the Balkan's countries. It includes only 4 main ingredients: tomato, cucumber, onion, and cheese, but is really delicious. It is perfect both as itself and as addition to the meat, fish and other vegetable dishes, and baking. All listed vegetables are sliced in tiny pieces, seasoned with salt and olive oil and well mixed. Served traditionally in a deep bowl, it is richly sprinkled with grated white cheese and garnished with fresh herbs. This simple Mind Map is however multifunctional and can be taken as a short and simple cooking instruction, as a list of ingredients needed to buy to make this salad, and as the base for constructing a detailed recipe of this dish. The similar maps are also the beautiful illustrations of the dishes’ composition to be used on cooking courses and in the menus of cafes, food courts, fast food restaurants, etc. 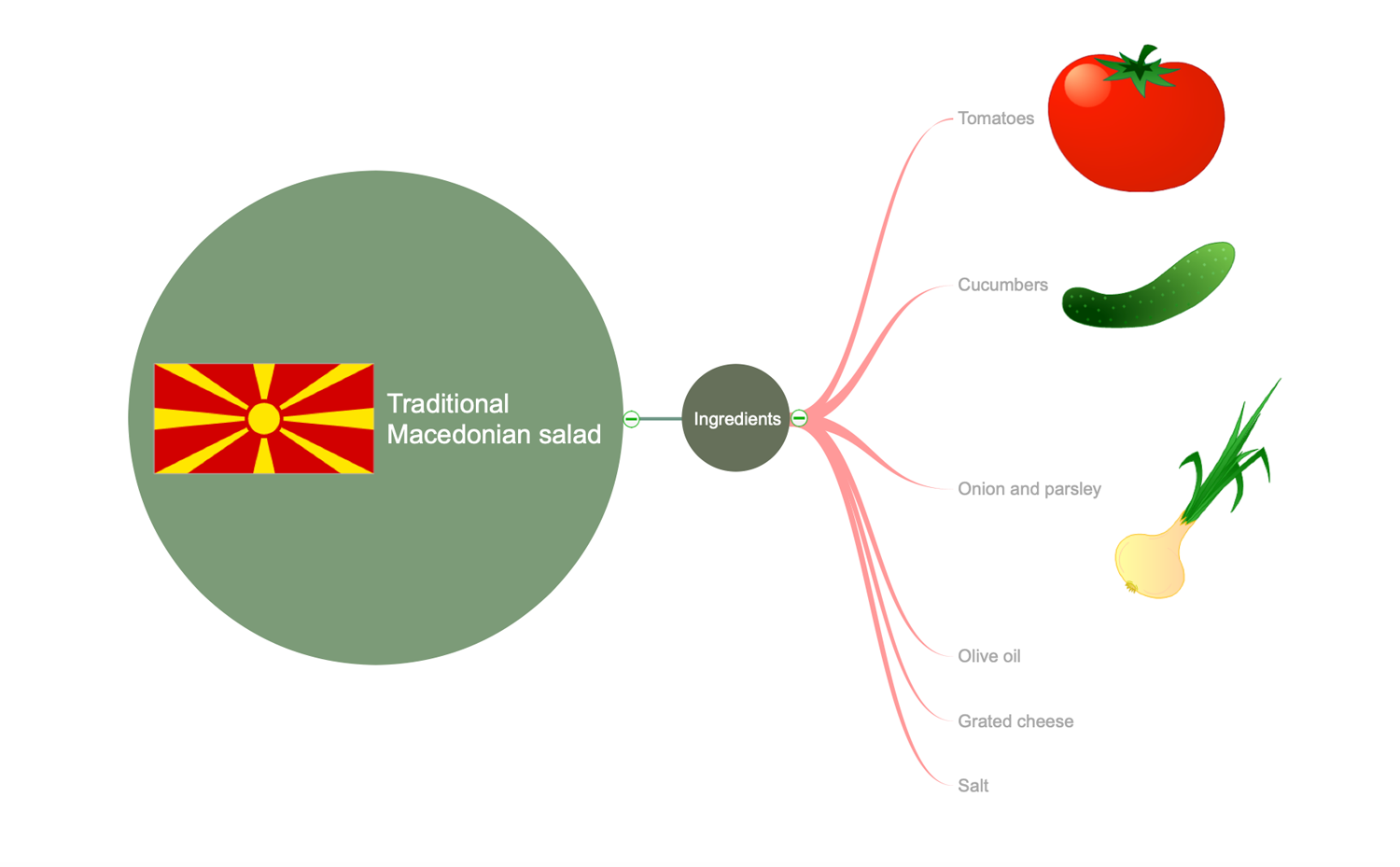 This Mind Map sample illustrates a variety of North America countries. At each topic representing the countries its name and clipart of the corresponding flag are included. The list of North America states includes 23 independent states and 20 dependent territories. The vast majority of the states belongs to the island states, these are 30 countries, and the other ones are located on the continent. The Mind Map’s topics were arranged automatically around the main idea, but if you want, you can move some of them a little further to the right and left, thereby increasing the map’s width and making it more compact in height. You can also arrange these countries according to their statistical data, such as the area, population, or economic values, etc. As for North America, the top ten of the largest countries by territory contains Canada, USA, Mexico, Nicaragua, Honduras, Cube, Guatemala, Panama, Costa Rica, Dominican Republic. 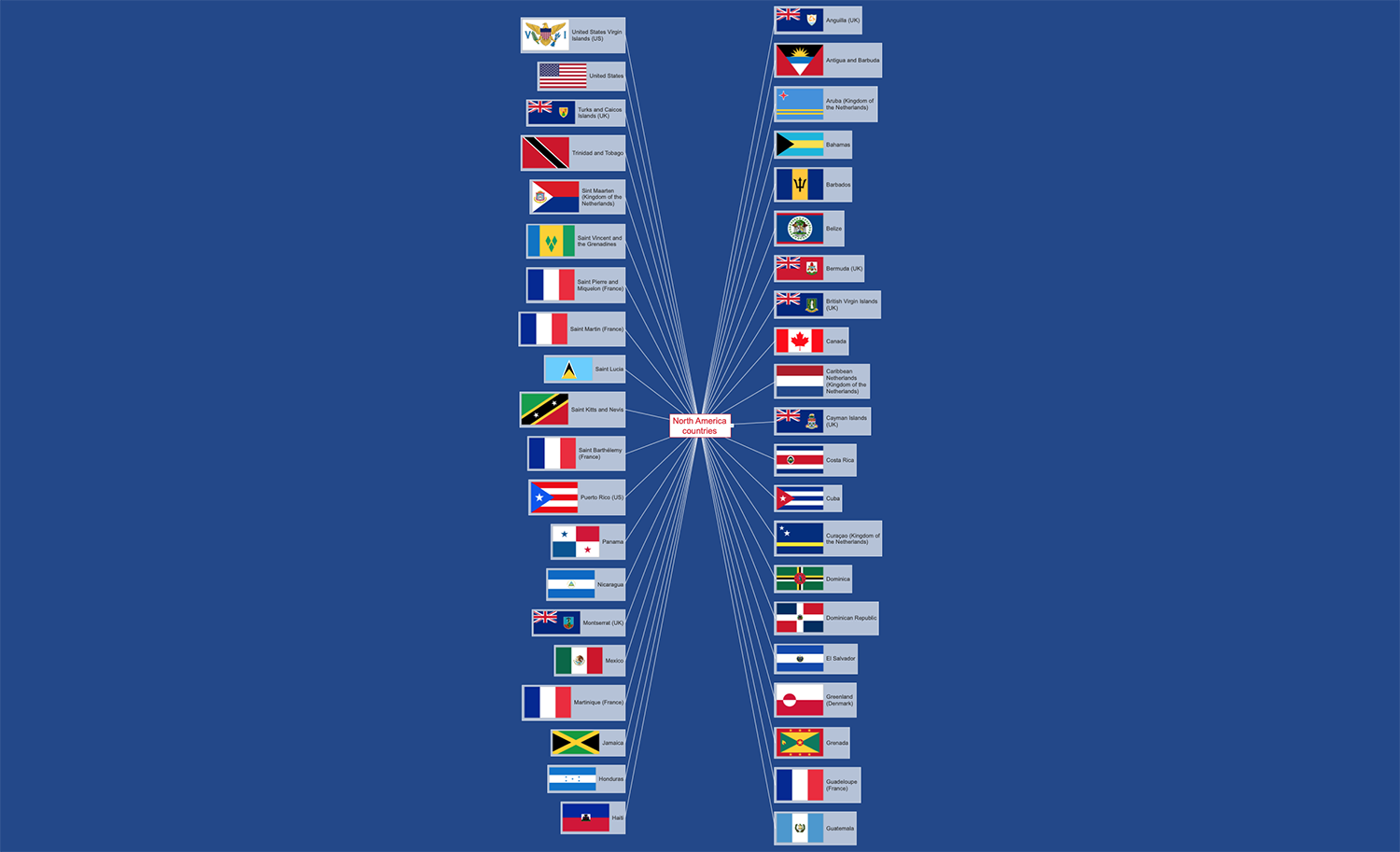 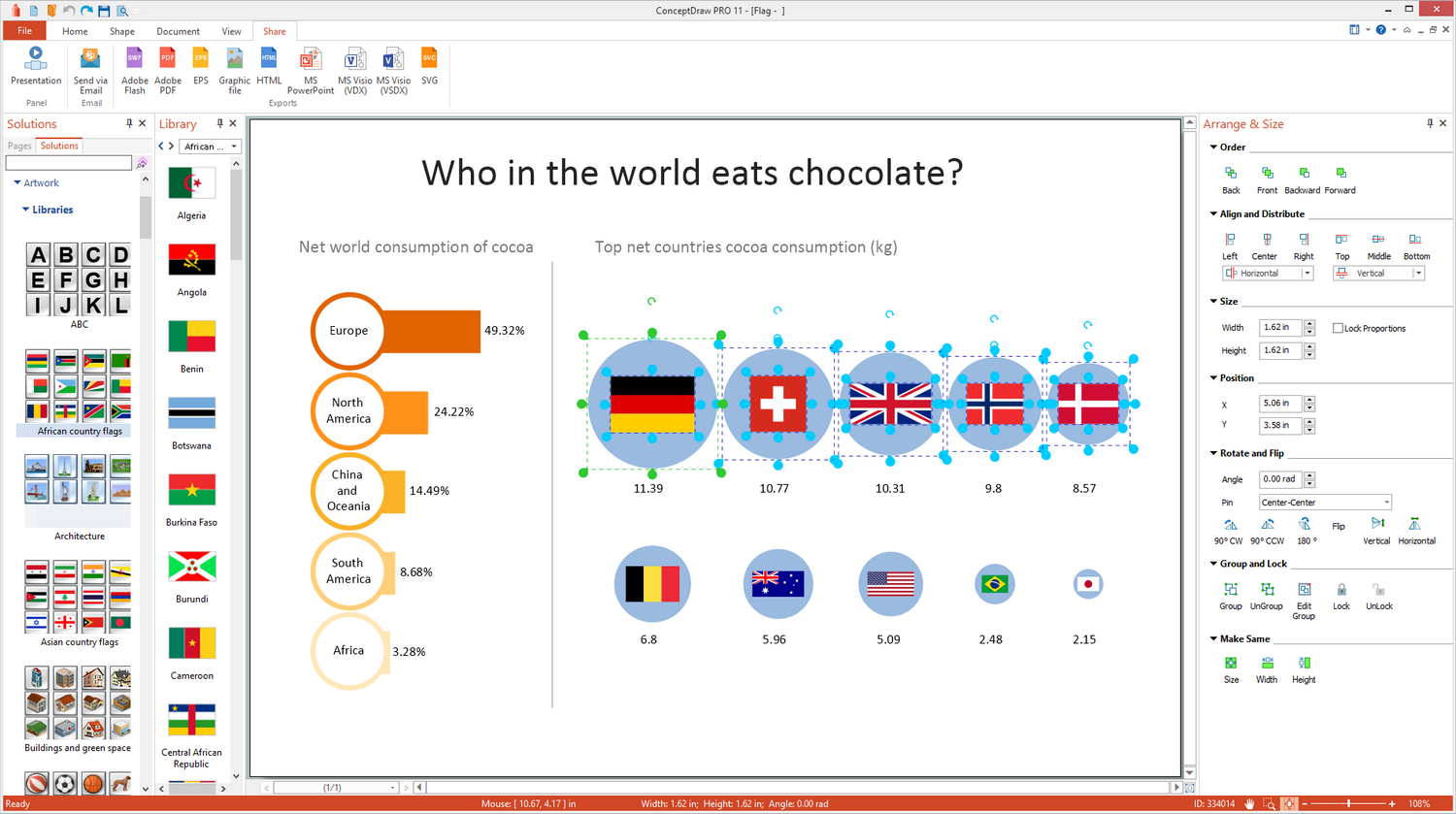 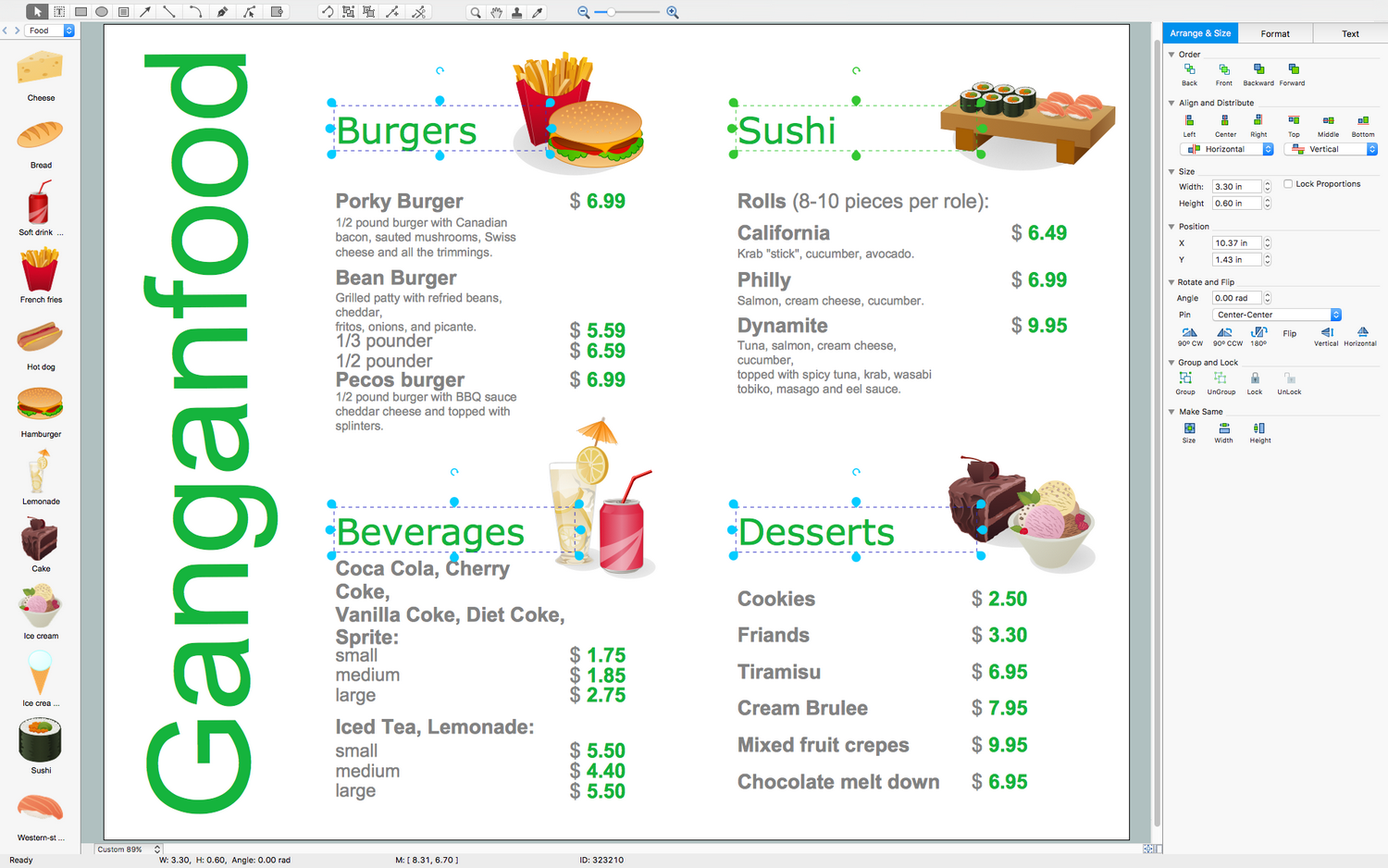 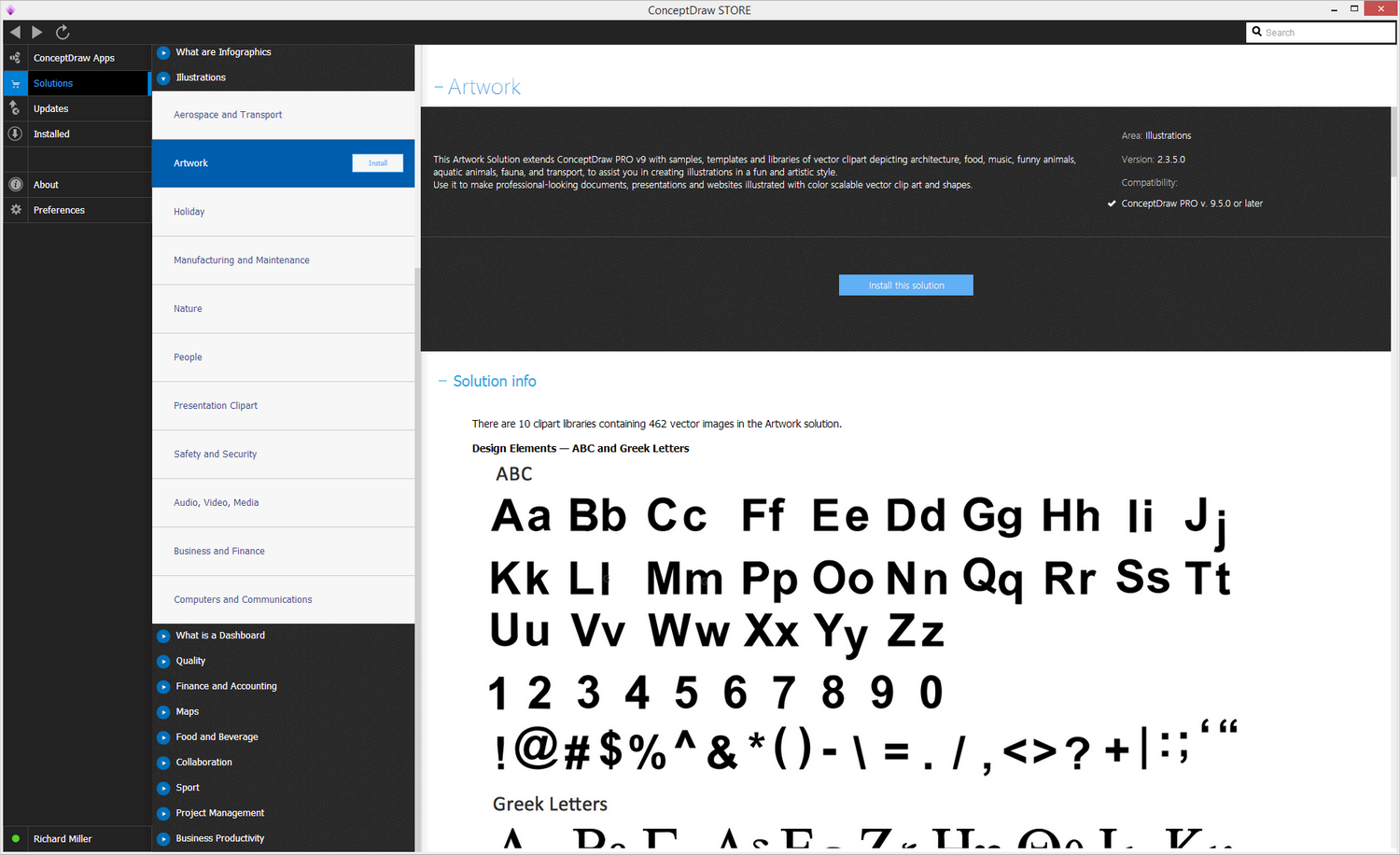 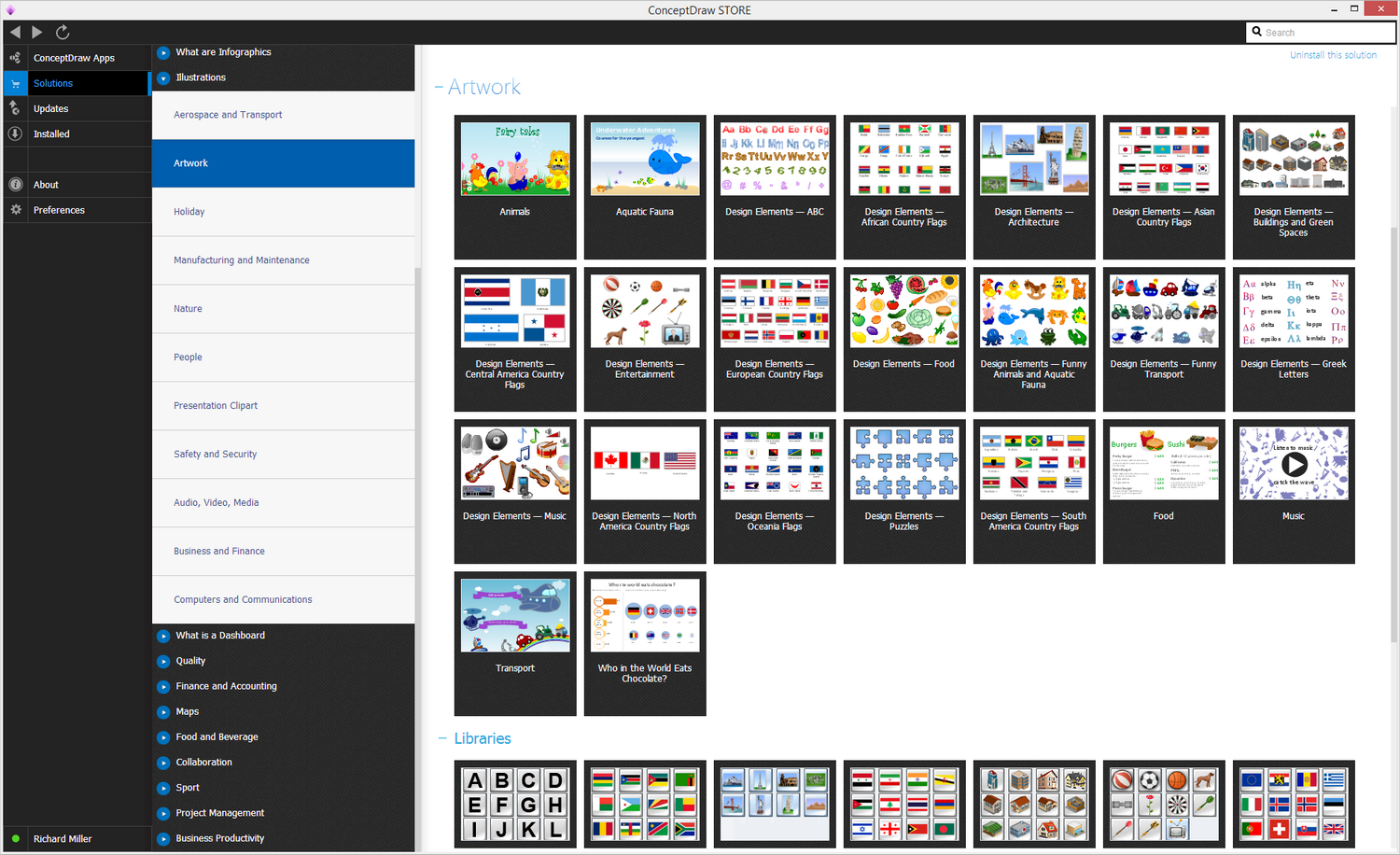 How to Create the New Library in ConceptDraw DIAGRAM

How to Perform a Dynamic Presentation with ConceptDraw DIAGRAM

How to Contribute Drawing With Library Objects