The most popular examples of such dependent phenomena may include the correlation between the physical statures of parents and their children. Also, a correlation may appear between the price for a product and its demand.

Correlations are very useful for a reason of being able to indicate a predictive relationship. Such relationship can be always exploited in practice and an example for it may be an electrical utility that can produce less power on a mild day which is known from the correlation between weather and electricity demand.

For those users who intend to capture a UEM data, the UEM Correlation Overview dashboard may be created in order to show a variety of UEM capacity data so it may give an opportunity to get an overall picture of UEM deployment as a whole. Such dashboard may include such data as the Queued UEM Events, the Processed User Actions, the Dropped/Skipped User Actions, the Visits, User’s Action Correlation Time, UEM Correlation Activity — Web Requests, UEM Correlation Activity — CPU, Processed Web Requests and Beacons as well as the Visit Analysis. Correlation dashboard solution can be used while creating the dashboards in the ConceptDraw DIAGRAM diagramming and drawing software.

Containing the set of the Live Objects that were designed for helping to visualize a predictive relationship between two numerical parameters of items from one or few series by using the Scatter Plot Charts.

Dashboards, and Why Should Your Business Use One?

The samples you see on this page were obtained by connecting a sample data source to templates from the Correlation Dashboard solution, to demonstrate some of the solution's capabilities and the results you can achieve.

You can download sample data sources for all dashboards to see how changes made to data effect dashboard appearance.

This sample was created in ConceptDraw DIAGRAM using the Correlation Dashboard solution, and demonstrates the solution's capabilities and the results you can achieve using this solution. All the charts on this page change automatically when the data source changes. 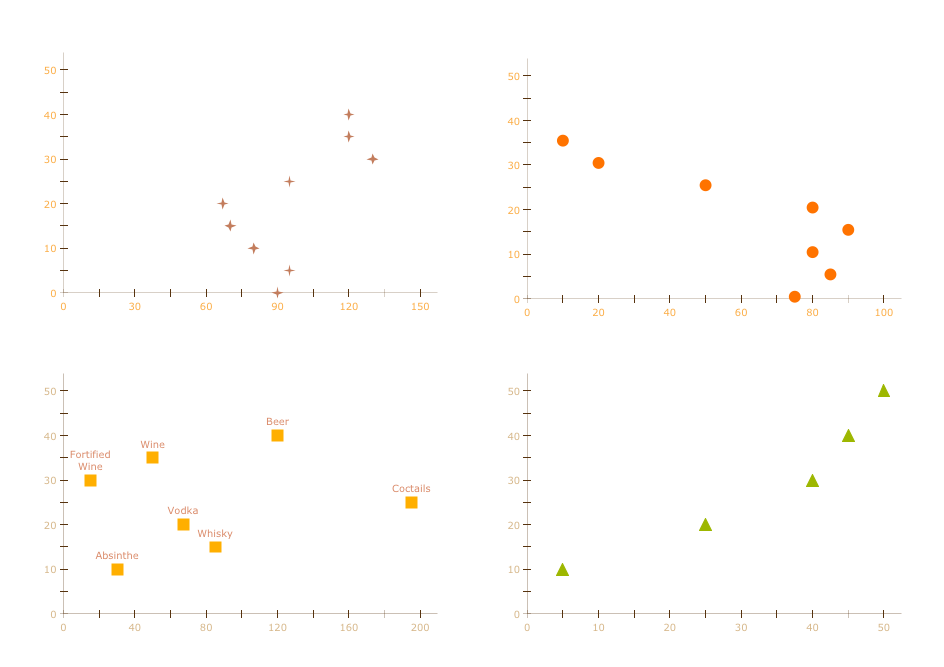 What I need to get started 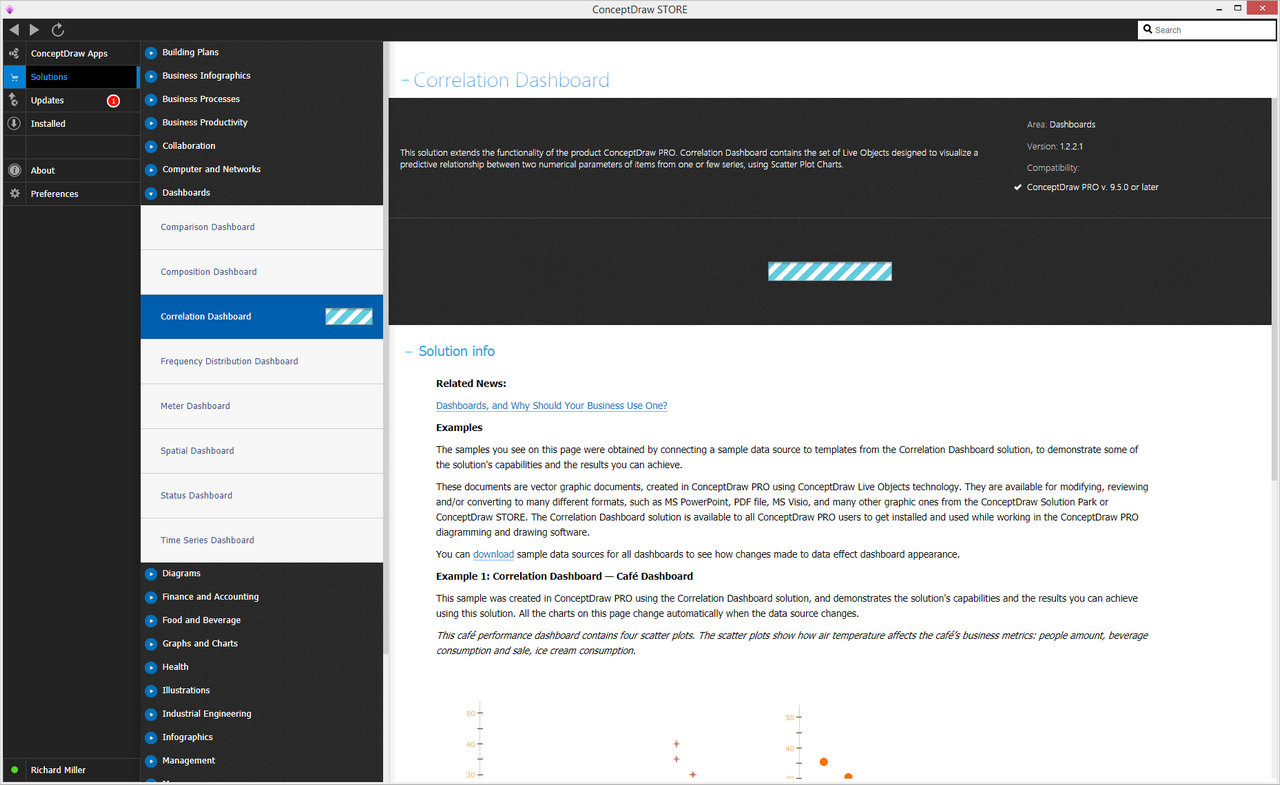 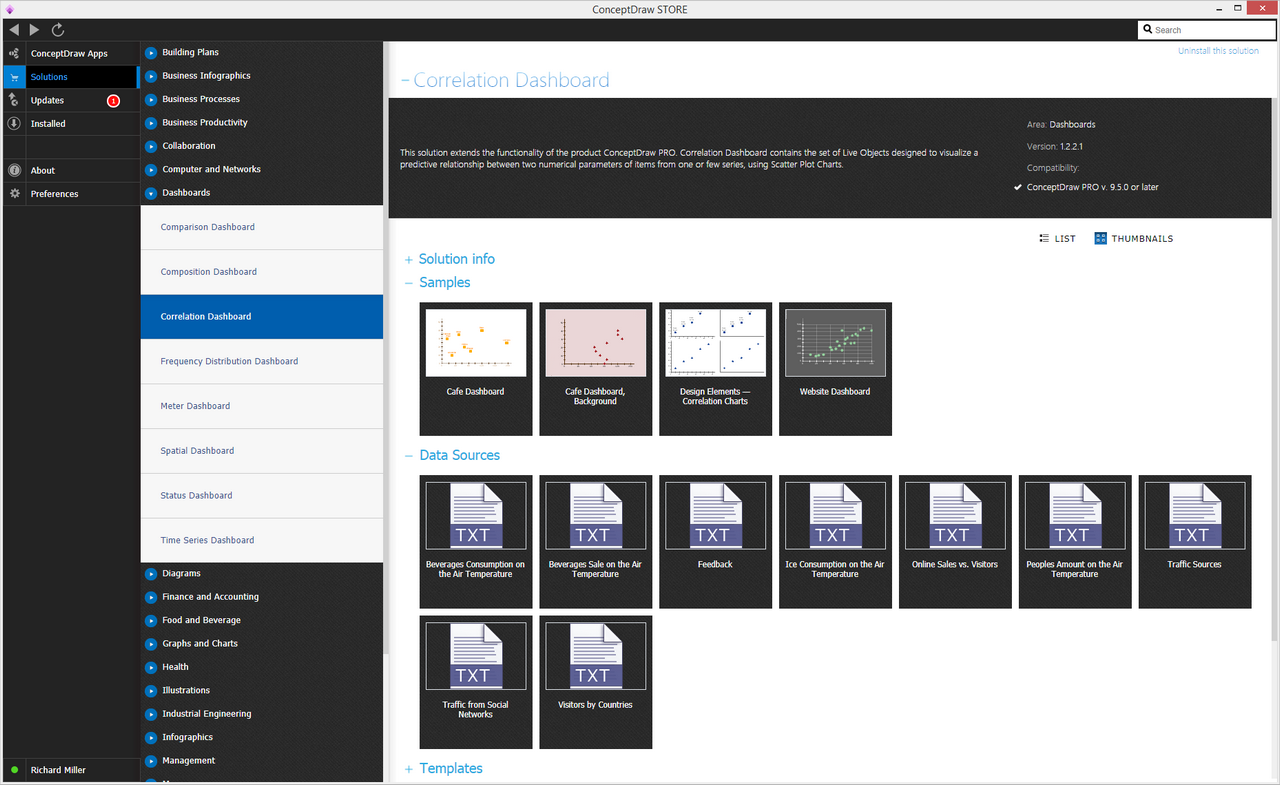 How to Connect a Live Object to a Data Source File

Any ConceptDraw Live Object Library consists of Live Objects, the special graphic objects that can change their appearance depending on external data. The Library contains the set of Live Objects designed to visualize a predictive relationship between two numerical parameters of items from one or few series, using Scatter Plot Charts.

Use these Live Objects to build and display the Correlation Charts according to your quantitative data. Include these charts into corporate and team dashboards to shows whether the relationship between two numerical parameters of items follows or not the normally expected pattern.

«A correlation comparison shows whether the relationship between two variables follows — or fails to follow — the pattern you would normally expect  <...>
Whenever your message includes words like related to, increases with, decreases with, changes with, varies with, or the converse such as doesn’t increase with, it’s an instant clue that you’re showing a correlation comparison»

Here is some advice on how to select the chart type for your Corellation Comparison: