Chemistry is known to be the scientific discipline. It is involved with compounds that are composed of atoms.

The atom is the basic unit of chemistry, consisting of a dense core called as the “atomic nucleus”. It is surrounded by a space hosting an electron cloud. All the nuclei are known to be made up of positively charged protons as well as uncharged neutrons. Together they are called “nucleons”. Any electron cloud is known to be consisting of a few negatively charged electrons. The last-mentioned ones orbit the nucleus.

Such term as a “neutral atom” may be understood when the negatively charged electrons balance out the positive charge of the protons. The mass of each nucleon is about 1836 times that of an electron. Each atom’s radius is about 10,000 times that of its nucleus.

Each atom may be also treated as the smallest entity that can be envisaged to retain the chemical properties of some element. The examples of atoms may be different elements and molecules. There also may be different combinations of atoms, such as their compositions, properties, structures, behaviours and the changes they undergo during a reaction with other compounds.

Chemistry occupies an intermediate position between biology and physics being sometimes called the “central science”. The reason for that is because it provides a foundation for understanding both applied and basic scientific disciplines at a fundamental level. Chemistry may be a plant one called “botany”. Geology may be also considered to be a sub-discipline of chemistry being a science describing the way the atmospheric ozone is formed. Ecology explains the way the environmental pollutants are degraded.

In order to represent numeral processes happening within the previously mentioned disciplines, the ConceptDraw DIAGRAM diagramming and drawing software may be used. Having the Chemistry solution with its pre-made samples and templates of the chemistry-related drawings as well as stencil libraries full of vector chemical equation symbols may lead to drawing the professionally looking chemical themed illustrations in the field of science and education within a short period of time getting a smart and good-looking result.

For creating numeral scientific and educational images, chemistry-related drawings, schemes, and diagrams of chemical as well as biological lab set-ups and labware, reaction schemes, molecular structures and formulas, a lot of chemists, same as geologists and ecologists might find the Chemistry solution a very useful tool.

There are 6 libraries containing 726 vector chemistry symbols in the Chemistry solution. 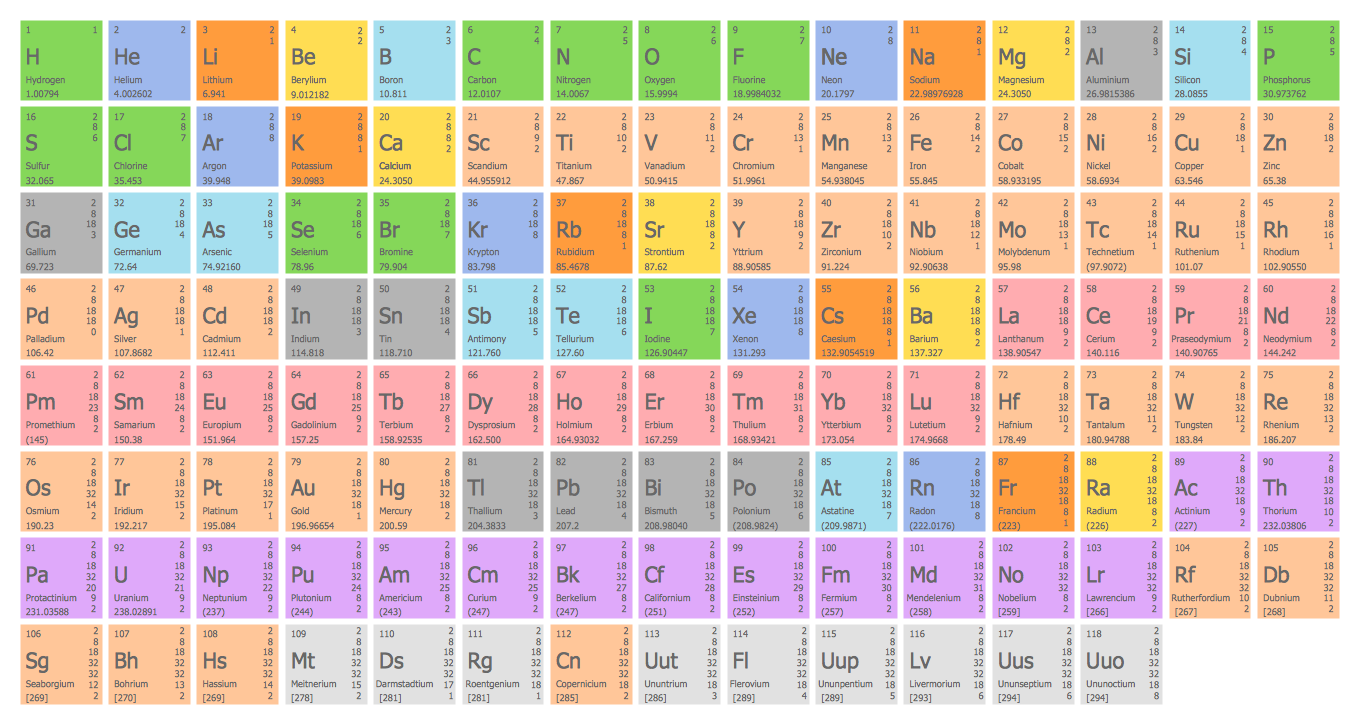 There are a few samples that you see on this page which were created in the ConceptDraw DIAGRAM application by using the Chemistry solution. Some of the solution's capabilities as well as the professional results which you can achieve are all demonstrated here on this page. 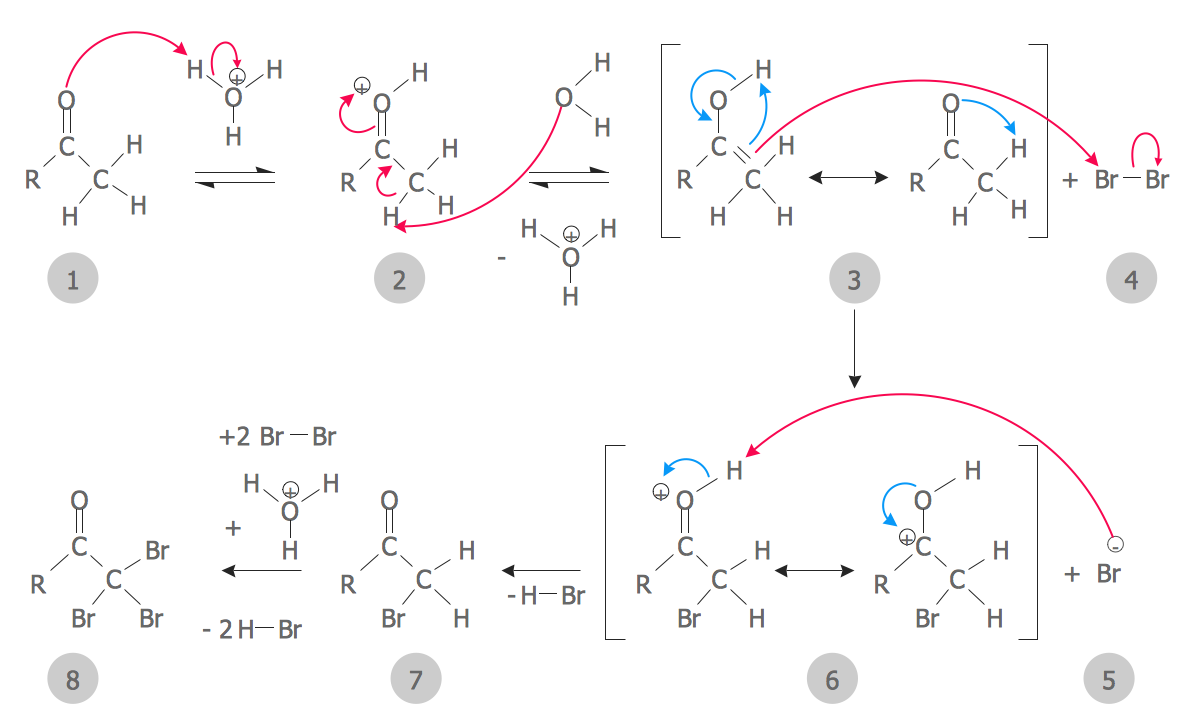 This diagram was created in ConceptDraw DIAGRAM using the Conformations Library from the Chemistry Solution. An experienced user spent 5 minutes creating this sample. 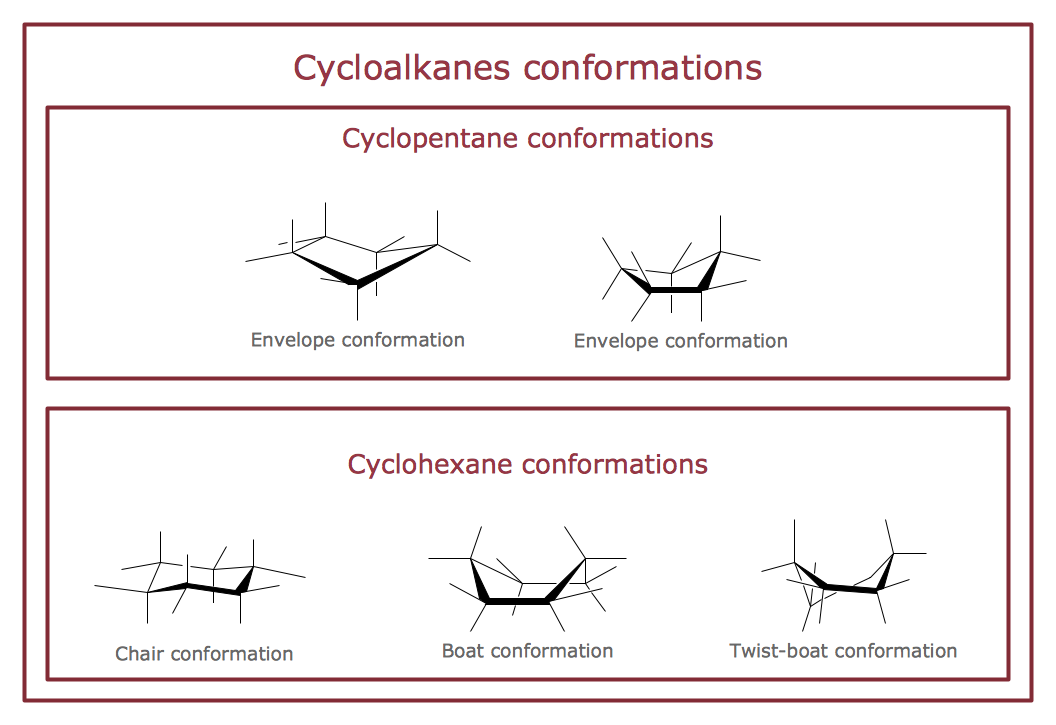 This diagram was created in ConceptDraw DIAGRAM using the Laboratory Equipment Library from the Chemistry Solution. An experienced user spent 5 minutes creating this sample.

This diagram illustrates the simple process of liquid gravity filtration through a prepleated paper filter - and creating the diagram is just as simple, using ConceptDraw DIAGRAM and its predesigned chemical equation symbols and chemical clipart. 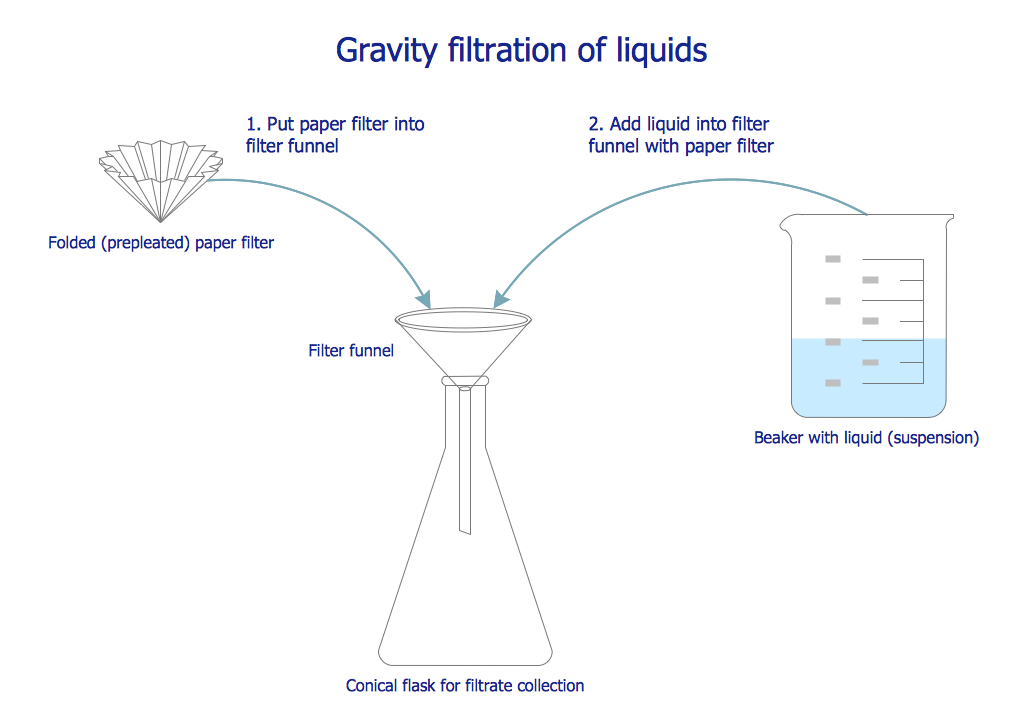 This diagram was created in ConceptDraw DIAGRAM using the Aromatics Library from the Chemistry Solution. An experienced user spent 5 minutes creating this sample.

This sample shows the structural formulas of PAH (polycyclic aromatic hydrocarbons) compounds, which contain organic molecules of carbon and hydrogen and are composed of multiple aromatic rings. 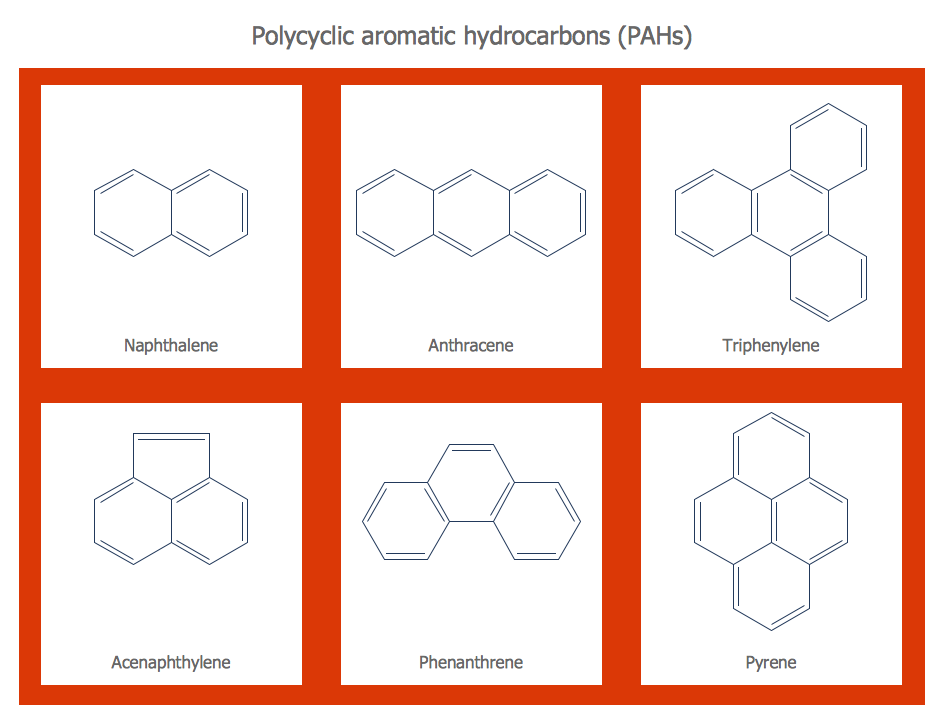 This diagram was created in ConceptDraw DIAGRAM using the Periodic Table of Chemical Elements Library from the Chemistry Solution. An experienced user spent 15 minutes creating this sample.

This sample illustrates the Periodic Table of Chemical Elements. The Periodic table was created by Dmitri Mendeleev in 1869, and is the foundation of chemical science. It represents and organizes the chemical elements on the basis of their atomic numbers. The diagram also contains a color key. 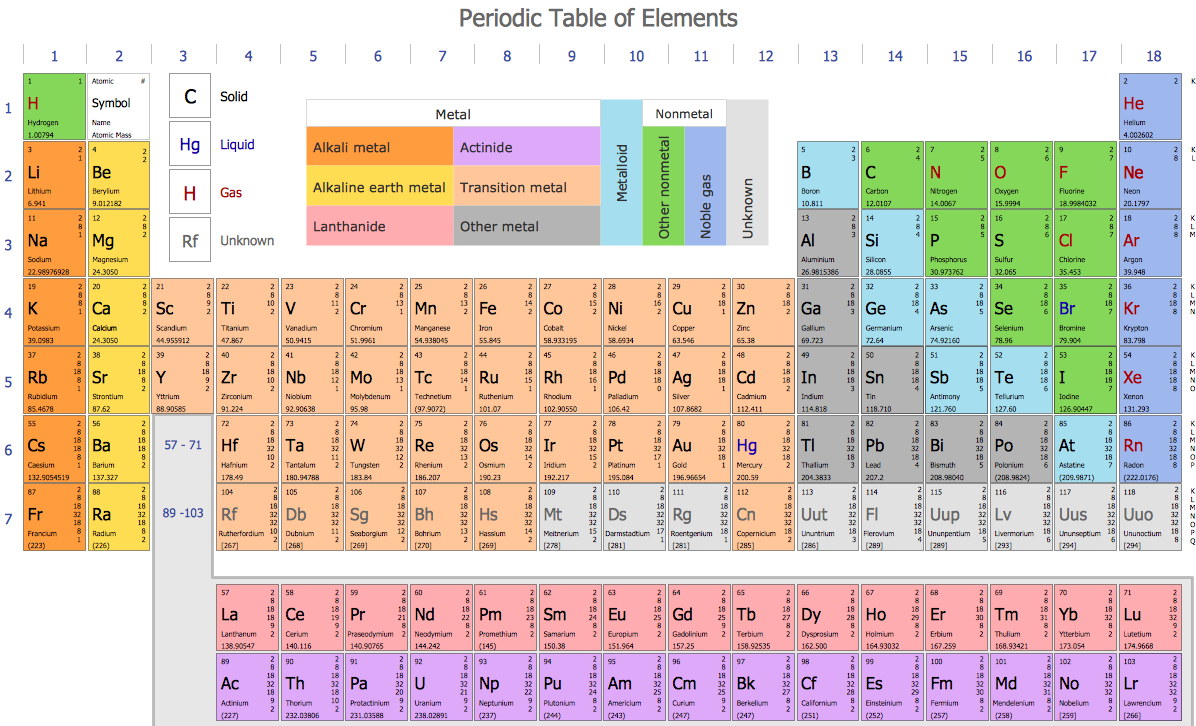 This sample visualizes the detailed scheme of phenols and reactions dependent on their participation. Phenols are aclass of organic chemical compounds that consist of a hydroxyl group bonded to an aromatic hydrocarbon group. 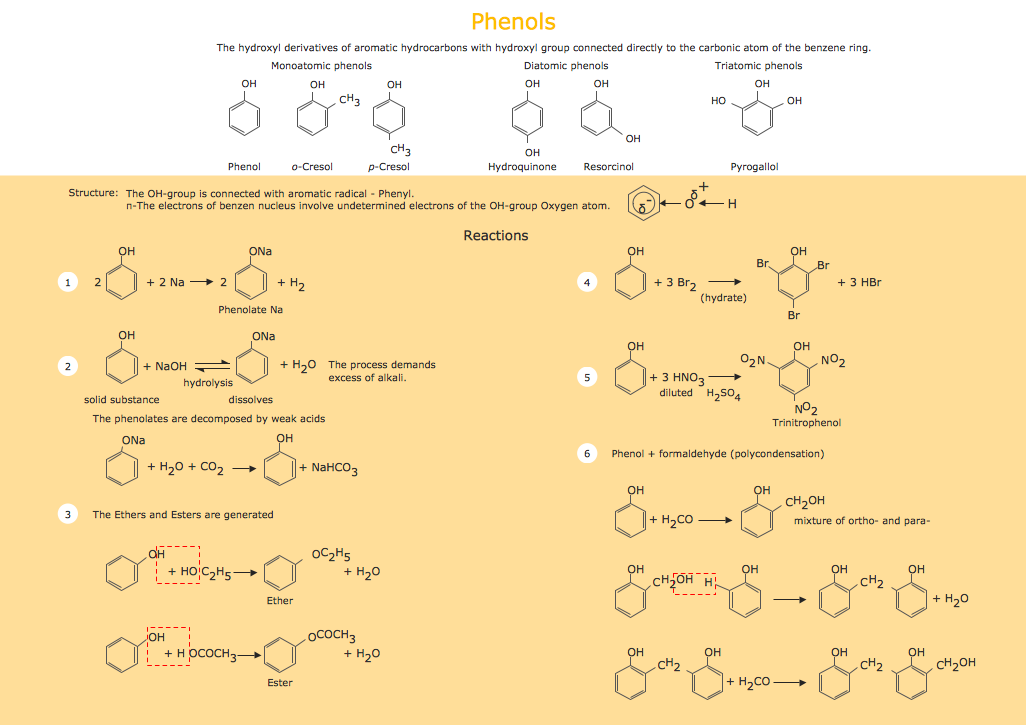 This diagram was created in ConceptDraw DIAGRAM using the Chemical Elements Library from the Chemistry Solution. An experienced user spent 5 minutes creating this sample.

This sample shows the scheme of one of 22 amino acids – Tryptophan. It is an essential amino acid in the human diet. Simply drag the predesigned chemistry equation symbols from the Chemical Elements Library and connect them to create a diagram of any chemical compound. 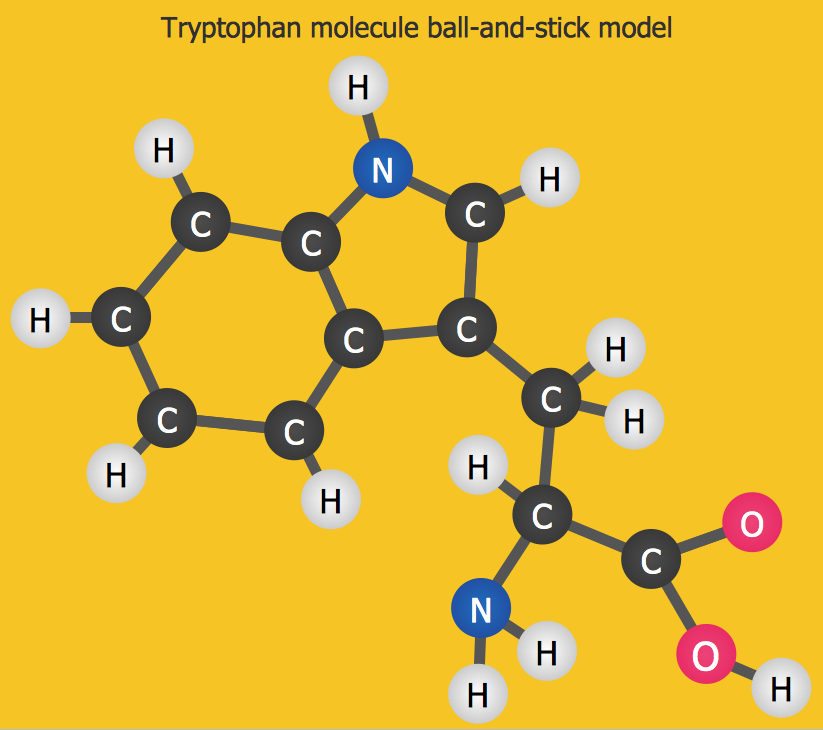 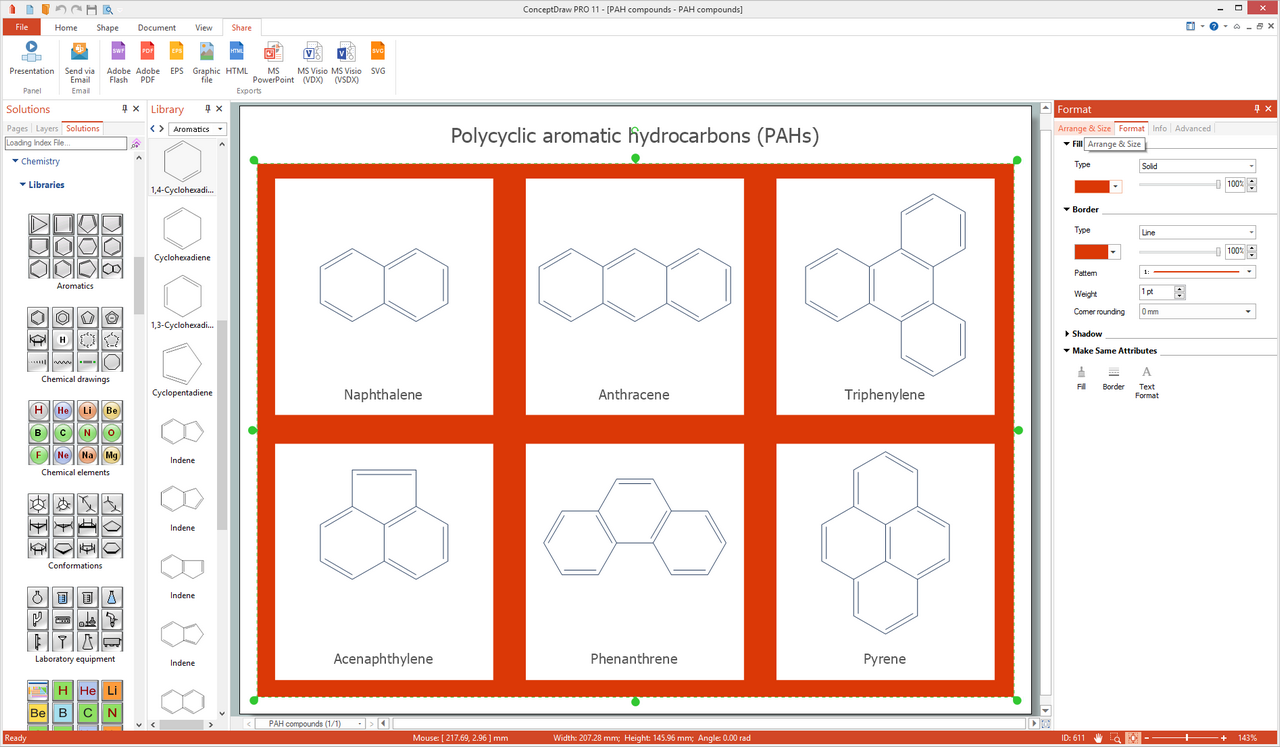 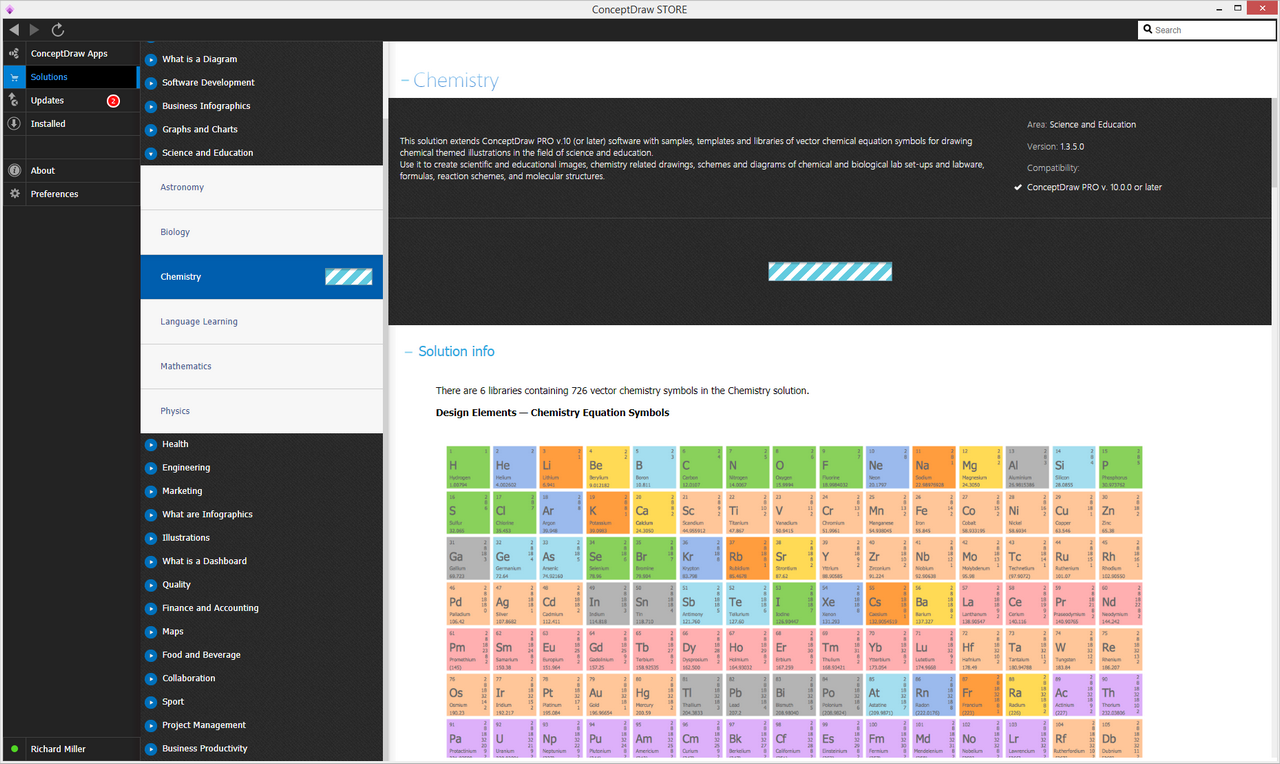 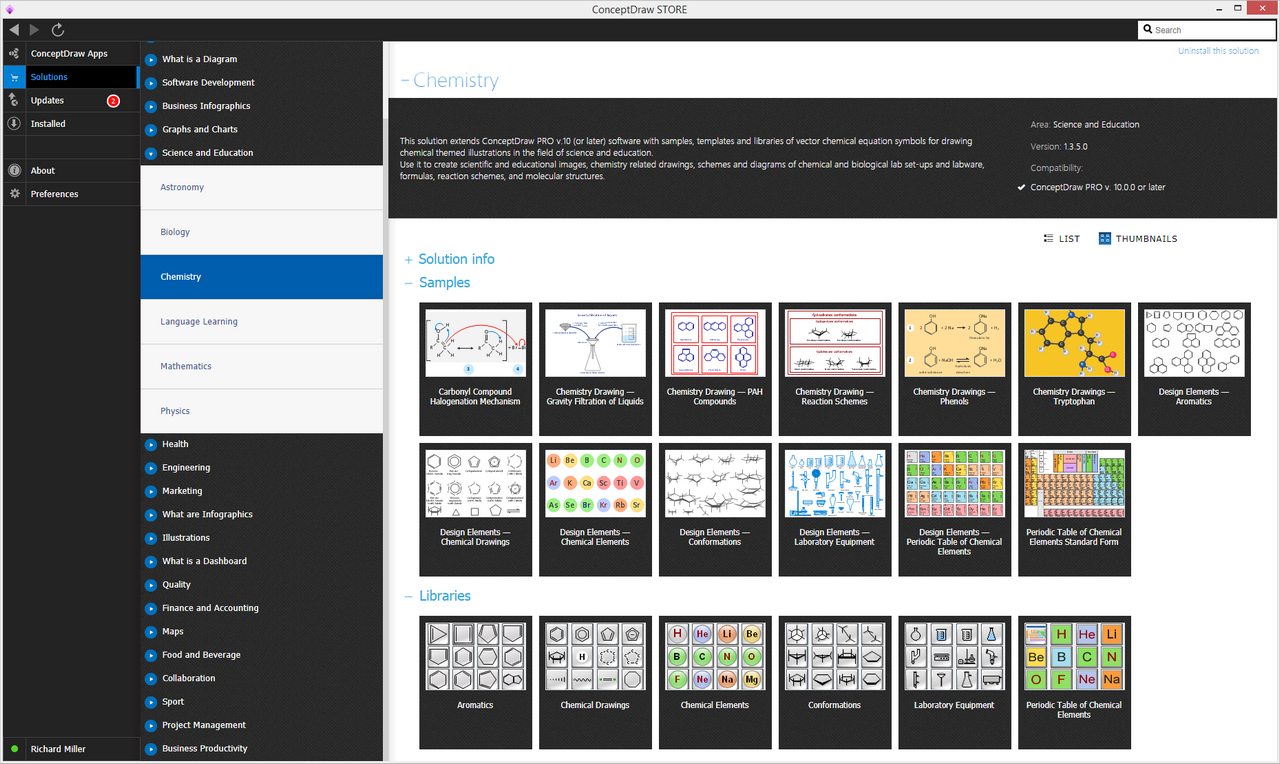