Astronomy is known to be as one of the oldest of the natural sciences.

The Solar System is one of the most popular terms used in astronomy, being the gravitationally bound system comprising the objects that orbit the Sun as well as the Sun itself, either in a direct or in an indirect way.

The two largest planets are Saturn and Jupiter. They are composed mainly of helium and hydrogen. Apart from the already mentioned, the Solar System also contains smaller objects. All of the needed objects may be always illustrated with the help of the ConceptDraw DIAGRAM diagramming and drawing software.

To simplify the work of drawing, the Astronomy solution may be used as an extension to the ConceptDraw DIAGRAM application. The last-mentioned sketching and illustration software may be used with the Astronomy solution allowing one to create the astronomy-related drawings by editing the pre-made templates and samples of the illustrations of the Space. There are also a few stencil libraries where a variety of astronomy symbols such as constellations, stars, planet and galaxies vector shapes may be found.

The Astronomy solution may be used by all the ConceptDraw DIAGRAM users for drawing both educational and scientific astronomy illustrations, astronomy diagrams and pictures of any complexity, such as the representations of the Solar System.

There are 7 libraries containing 191 astronomy symbols in the Astronomy solution. 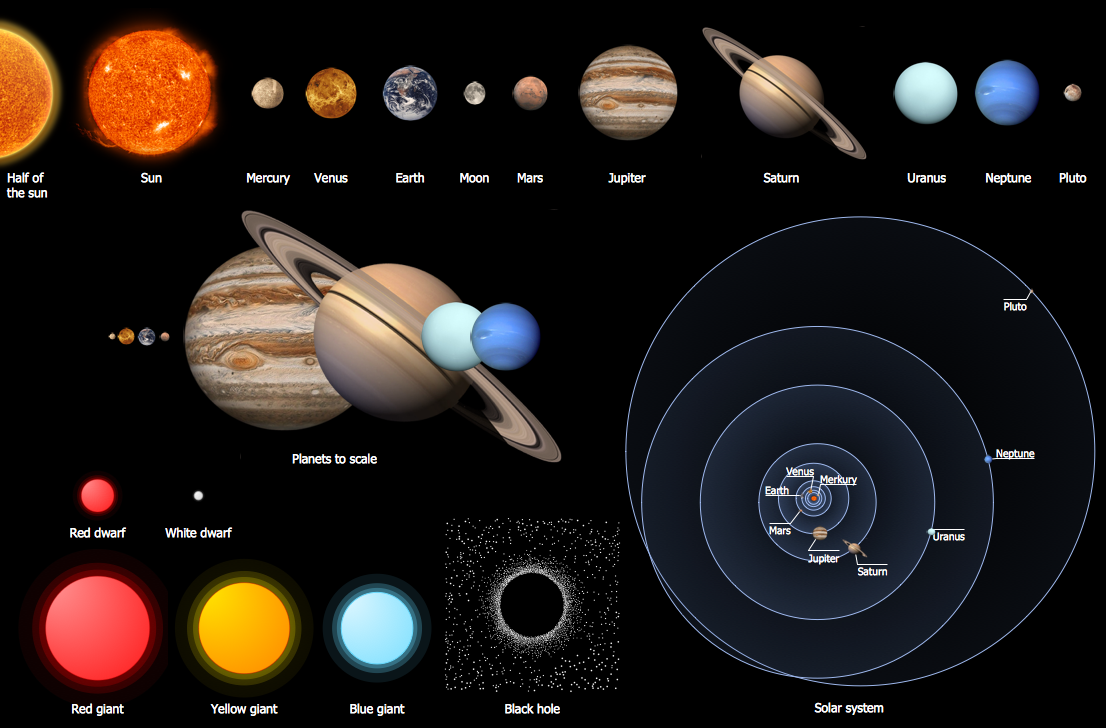 There are a few samples that you see on this page which were created in the ConceptDraw DIAGRAM application by using the Astronomy solution. Some of the solution's capabilities as well as the professional results which you can achieve are all demonstrated here on this page.

This diagram was created in ConceptDraw DIAGRAM using the Stars and Planets Library from the Astronomy Solution. An experienced user spent 20 minutes creating this sample.

This sample shows how you can map the vast expanse of the Solar system, using the Astronomy Solution for ConceptDraw DIAGRAM. Creating astronomy pictures is a simple task when using the solutions comprehensive libraries, full of astronomy symbols and planet vector shapes. 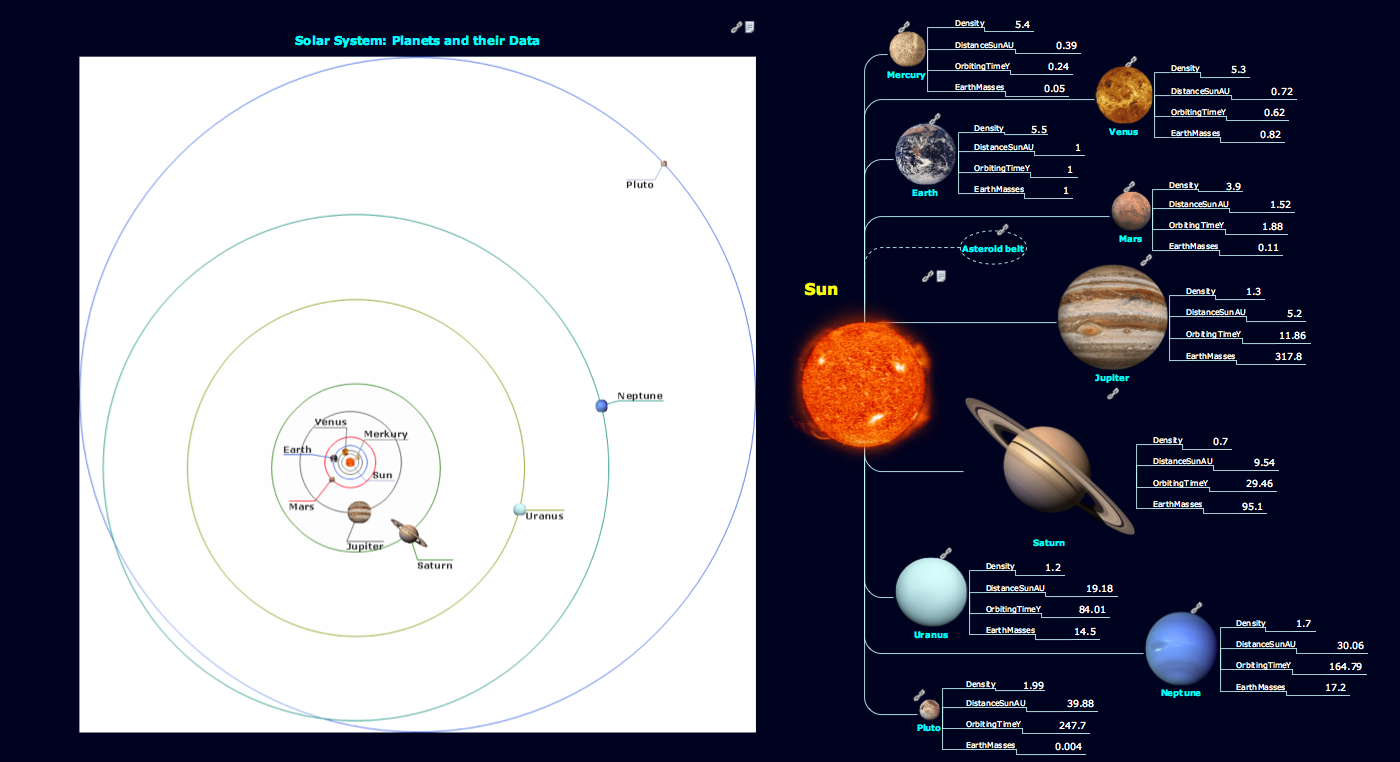 This sample demonstrates the extragalactic distance ladder - a visual interpretation of the methods used by astronomers to measure the distances between celestial objects. ConceptDraw DIAGRAM is the perfect software to map out this complicated method. 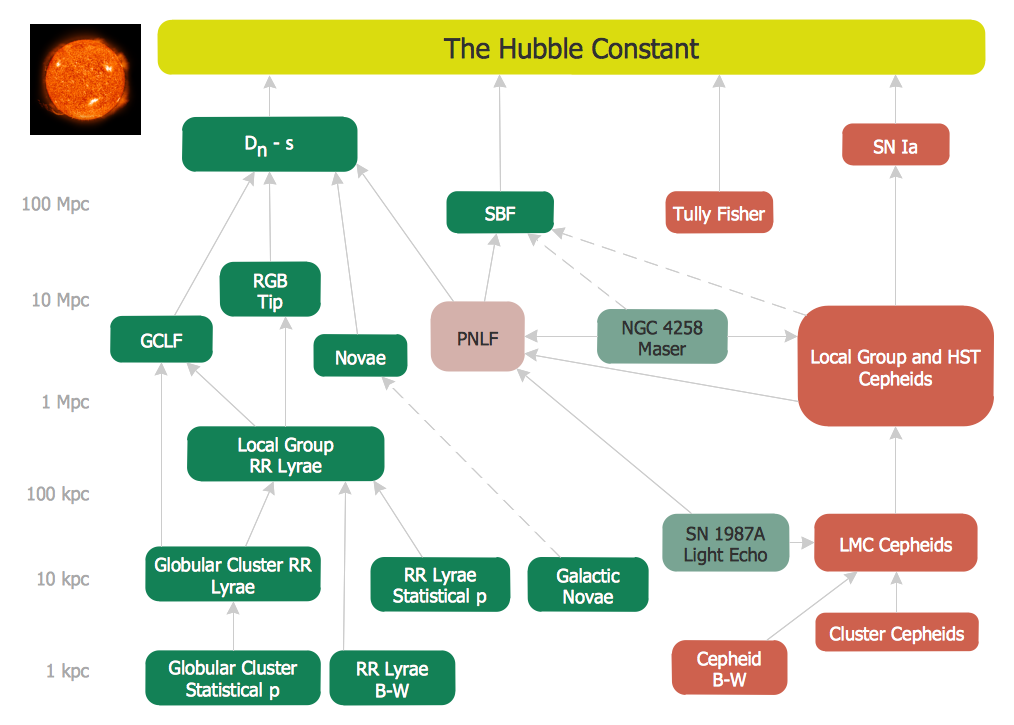 This sample visualizes the natural hierarchy of organisms, and the planets of our Solar system. Use ConceptDraw illustration software to design striking and engaging astronomy pictures, illustrations and diagrams. 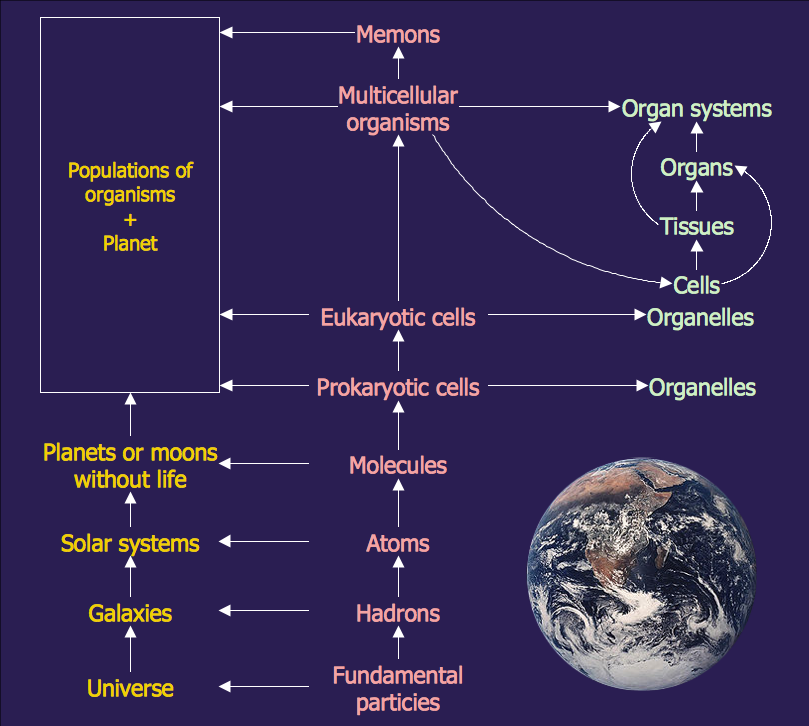 This diagram was created in ConceptDraw DIAGRAM using the “Constellations Except Zodiac Northern and Southern” and “Zodiac Constellations” Libraries from the Astronomy Solution. An experienced user spent 10 minutes creating this sample.

This sample shows the Summer Triangle - an astronomical asterism in the northern hemisphere, forming an imaginary triangle in the celestial sphere with vertices at the stars Altair, Deneb, and Vega, the brightest stars of the constellations Aquila, Cygnus, and Lyra. 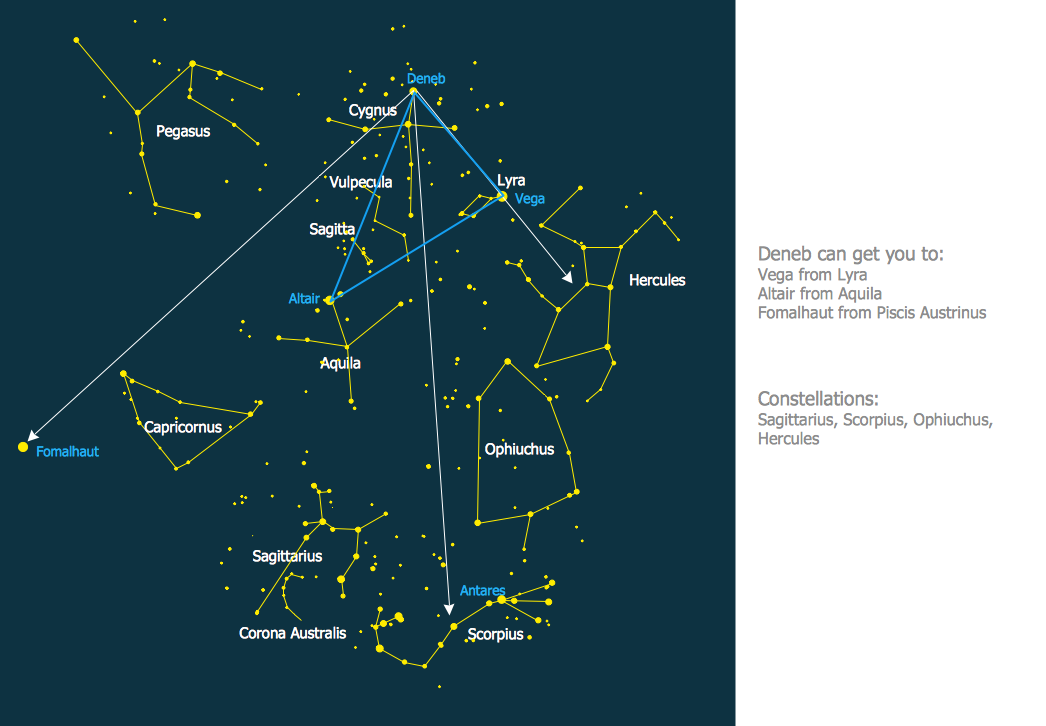 This sample illustrates the phases of moon. Various libraries have been used in conjunction with the Stars and Planets library, to create an informative diagram of the lunar cycle. 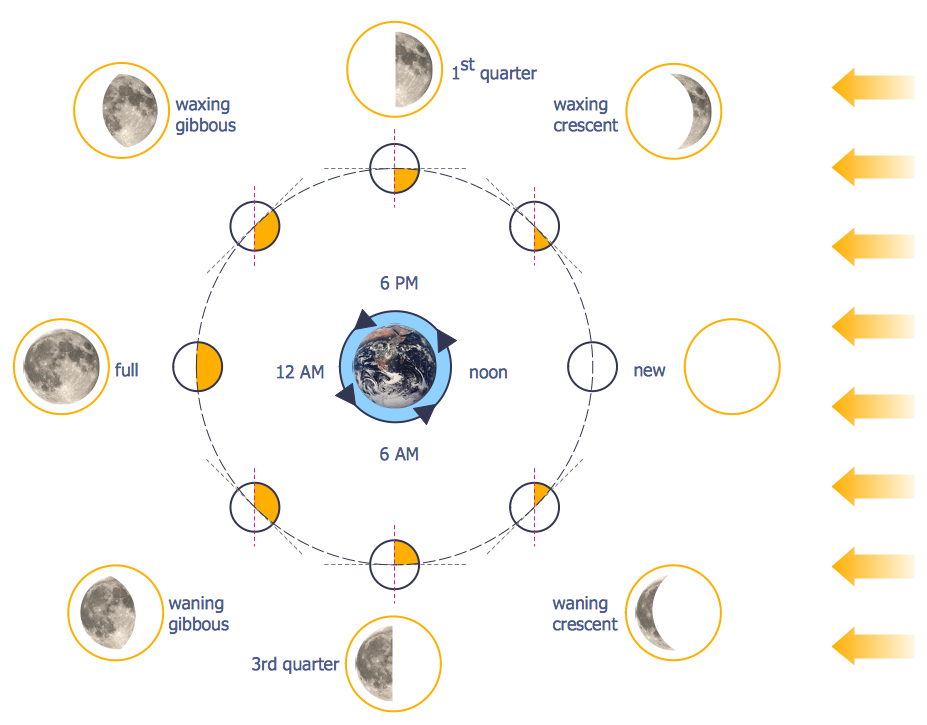 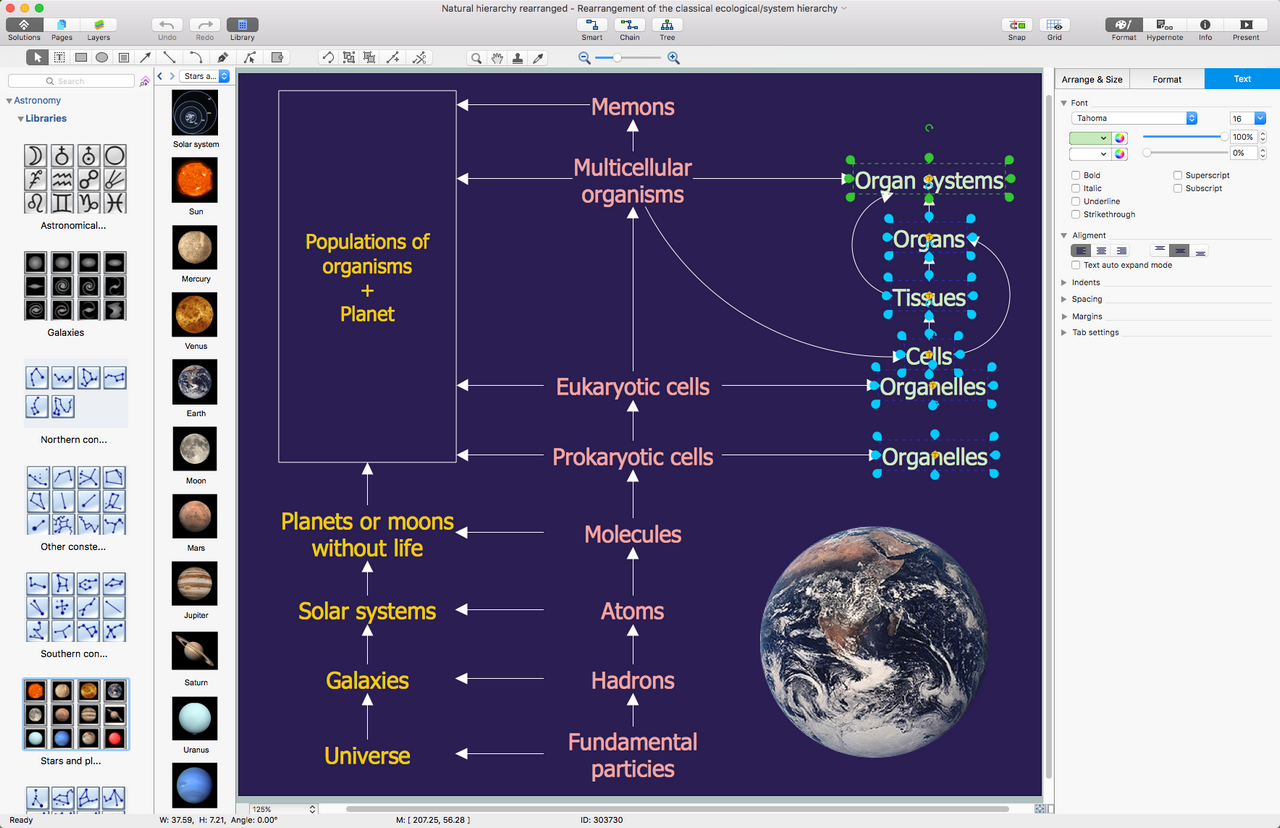 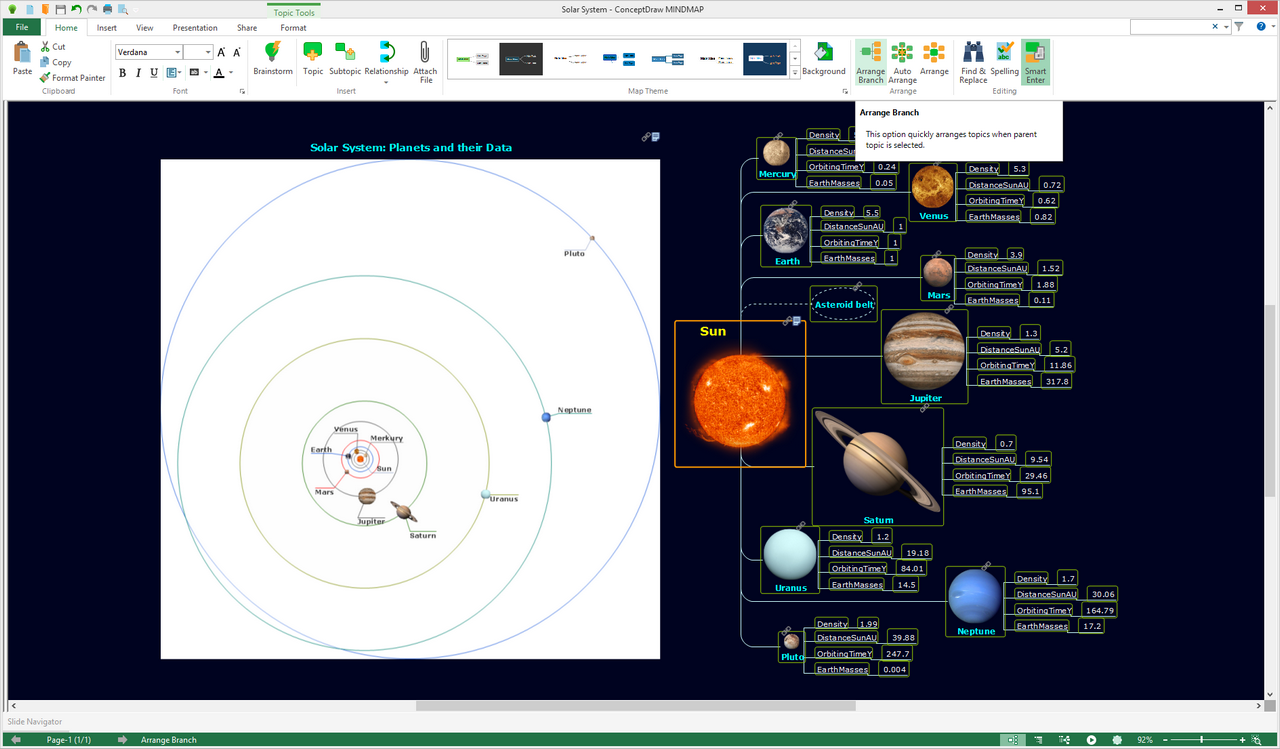 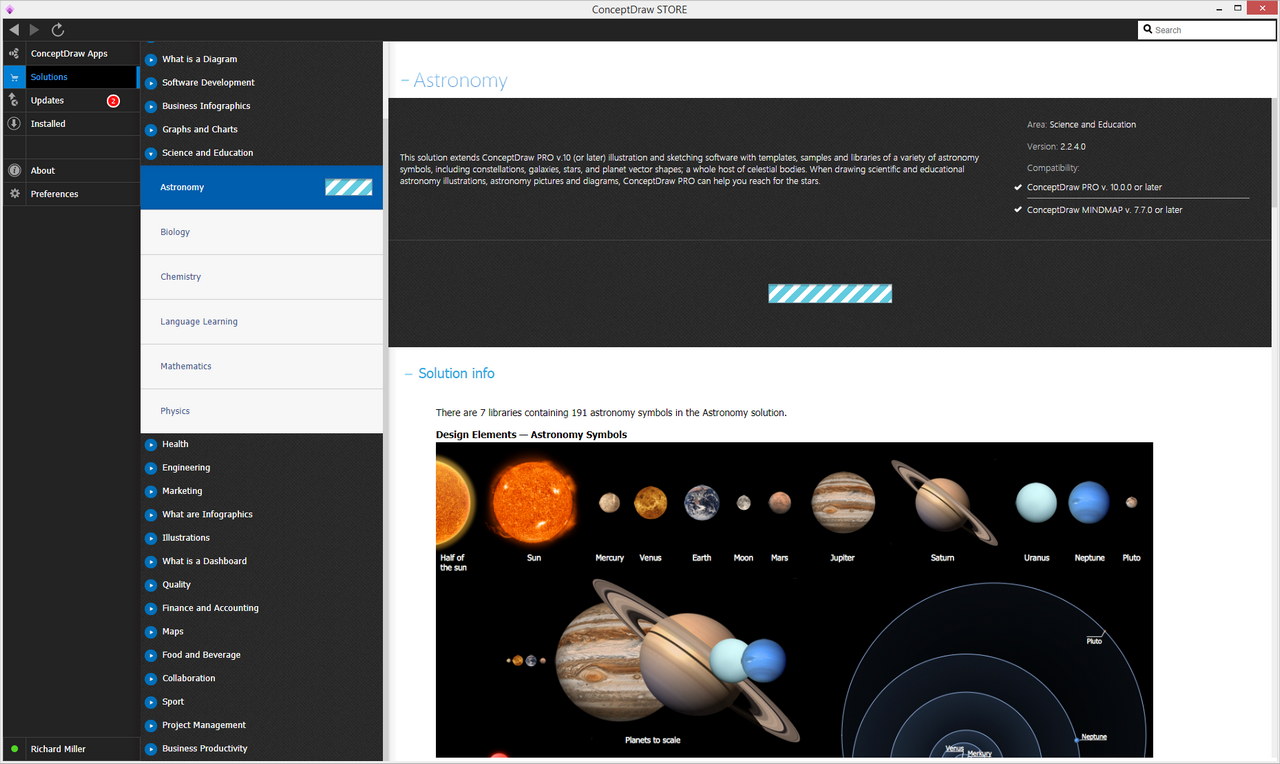 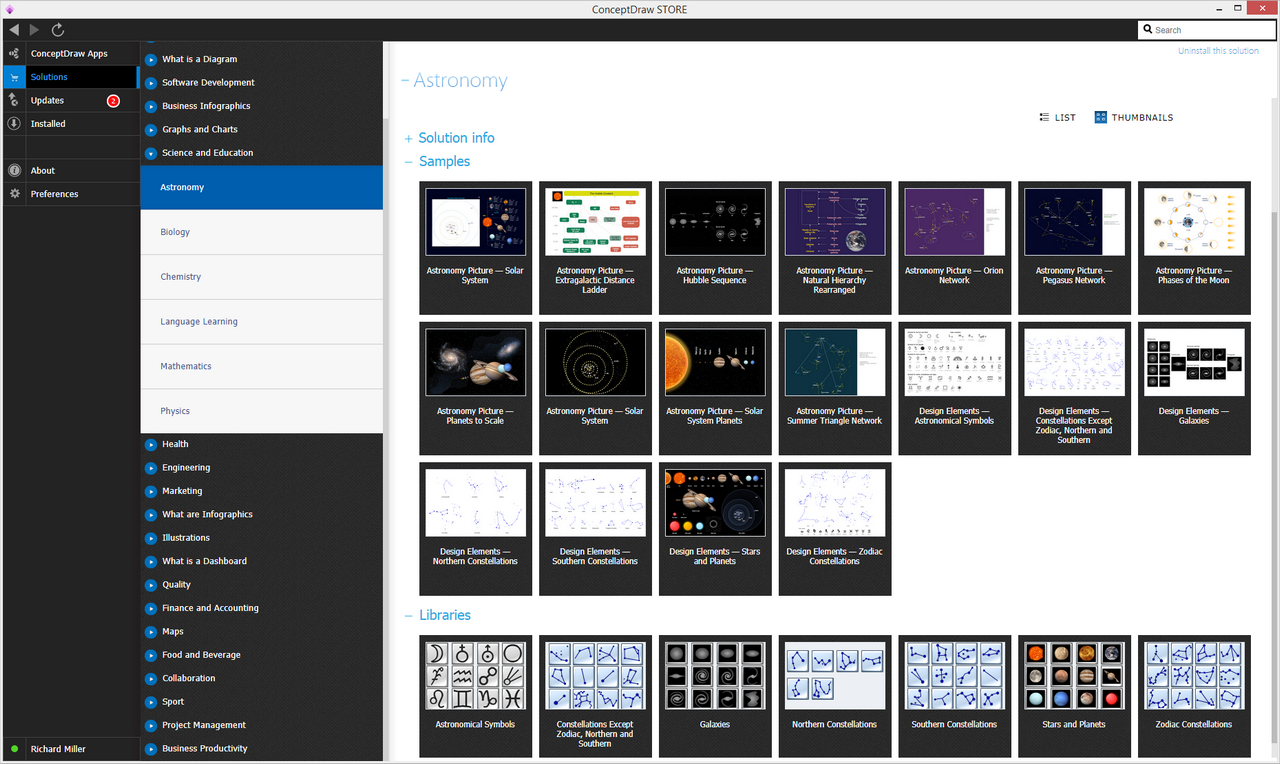 How to Draw a Constellation ?hart

How to Create an Astronomy Diagram