Working in the IT company or at least being interested in what is going on in this field of business activity, you might be interested in so called “Booch method”, which is used for developing the software object-oriented-wise. This Booch method includes the use of object modelling language, the recommended and time-tested practices as well as an object-oriented development process.

This Booch method was developed by Grady Booch, that is why it has such name. This method was very popular and world widely used in the engineering, especially in the software engineering for conducting the object-oriented analysis as well as the design of some software from the support tools and documentation.

There are quite many diagrams, which can be created basing on the Booch method, such as: Object one, State transition, Interaction, Module one as well as Process diagram. Each of the diagrams mentioned above can be made using our unique and very useful software, which is ConceptDraw DIAGRAM application. With help of ConceptDraw DIAGRAM you can create any of the diagrams, including those based on the Booch method, only within a couple of hours or even minutes if you know how to work in this software already. Although, if you are the beginner and you just started using ConceptDraw DIAGRAM then you can always find lots of tutorials we provide, in a way of articles on this site and videos on Youtube.

Having ConceptDraw DIAGRAM is always very beneficial as it allows you to create any needed drawing, not only diagrams, but also charts, flowcharts, maps, plans, schemes and other schematics using truly convenient in use and so very helpful software. Having ConceptDraw DIAGRAM as well as ConceptDraw STORE can simplify your work as well as your life as CS Odessa team of IT specialists developed lots of solutions, where you can find already previously created templates and samples, which all are available also on this site. These templates as well as examples can be used as your own drafts for your own unique drawings as you can always change any of the elements of the schemes, plans, flowcharts, charts, maps and diagrams and in this way to edit them.

Thus, if you have to create one of the diagrams based on the Booch method, such as Class diagram, for example, being a type of a static structure diagram, with the help of which you can describe the structure of a system in a way of showing the system’s classes, their operations, methods, attributes as well as relationships between their objects, then you can simply choose one of already pre-made class diagrams in the solution and edit it the way you want: to add more blocks to it and so to put more data, to change the way it looks like, etc. Simple!

Although, if you want to make your own class diagram from scratch, then you have to take these notes into consideration: first of all, in this type of diagram, the classes are all illustrated in a form of boxes, containing top, middle and bottom compartments. The top compartment usually contains the name of the class itself. It is usually centred with the first capital letter in its name. The middle one has the attributes of the class. They are usually illustrated on the left and the first letter is usually lowercase. The very last, the bottom compartment contains the operations, which this class can execute. They are usually also illustrated on the left and the letter is also lowercase.

If you want to create an object diagram as well, which is the one with the aid of which you can show a partial or a complete view of some particular structure of already existing modelled system at a certain period of time, then, again, you can pick any of the examples you like and use them as your drafts, combining or using separately changing anything you want to be changed. In this way it is always quicker and simpler to create diagrams, that is why especially for ConceptDraw DIAGRAM users our CS Odessa team of professional IT specialists, including the designers, developed the incredible and very useful solution – the “Software Engineering” one. This solution can be found in the Software Development area of ConceptDraw Solution Park on this site or, if you have ConceptDraw STORE downloaded to your desktop, then you always can get one from there as well.

Interaction Overview diagram is the one which is used for controlling the nodes flow and it is very similar to another diagram, called the Activity one. Both of them are used for simple visualization of some activities sequence. The difference between the interaction and activity diagrams is that an interaction overview each of the individual activities is illustrated as a frame and each of such frames contains a nested diagram itself. Having the Software Engineering solution means having all of the necessary tools for making class, object, state transition, interaction, module and process diagrams within only a short period of time. This solution includes the vector stencils library “Booch OOD” containing all of the needed specific symbols of the Booch method, such as class symbols, association symbols, aggregation symbols for using while working with ConceptDraw DIAGRAM diagramming and vector drawing software.

Use the Software engineering solution to draw Object-oriented design (OOD) diagrams for your business documents, presentations and websites. 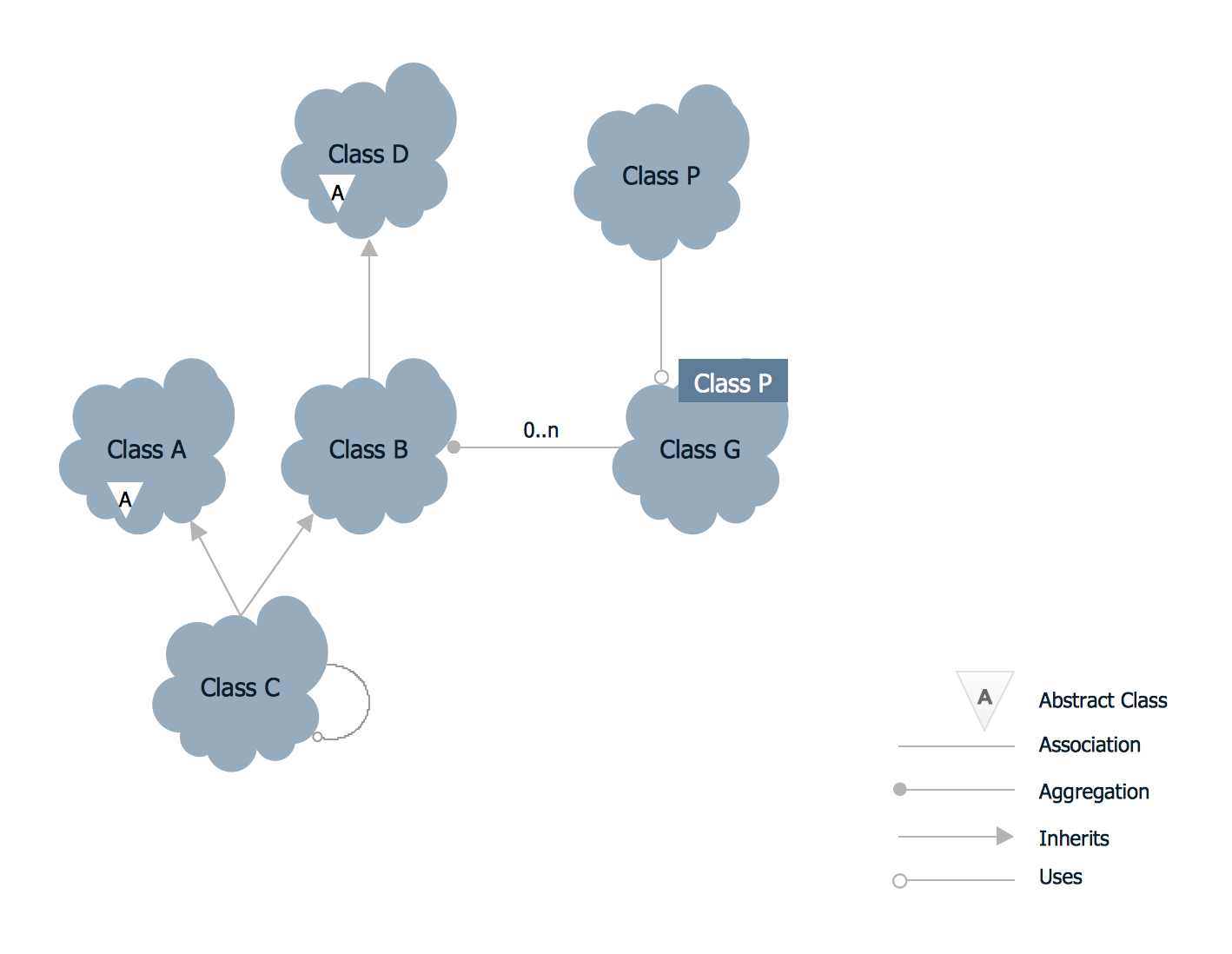 The example above illutrates the Booch method usage for a climate control system.

Services UML Diagram. ATM system. This sample was created in ConceptDraw DIAGRAM diagramming and vector drawing software using the UML Use Case Diagram library of the Rapid UML Solution from the Software Development area of ConceptDraw Solution Park. This sample shows the scheme of the servicing using the ATMs (Automated Teller Machines) and is used at the working of ATM banking systems, at the performing of the banking transactions. 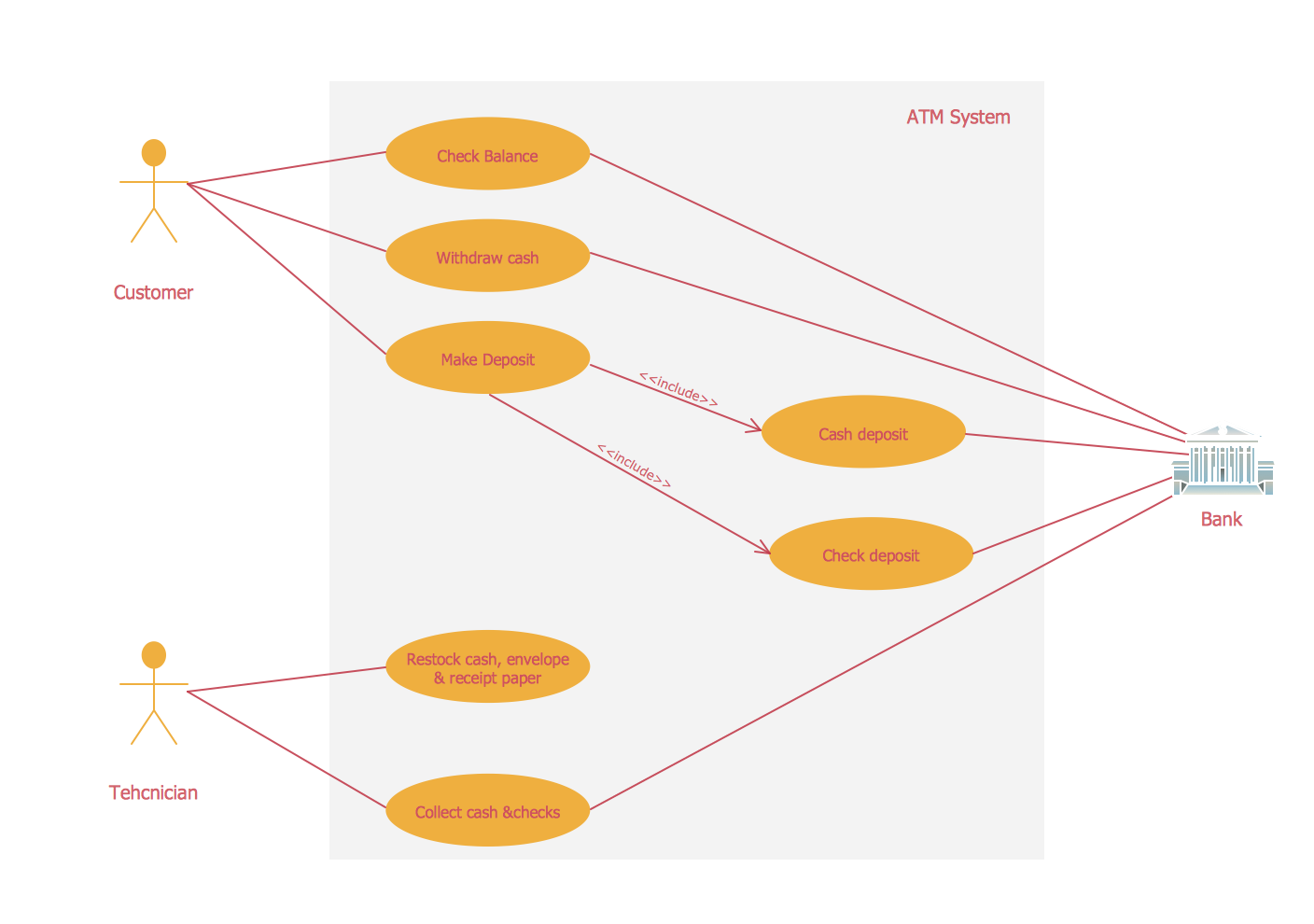 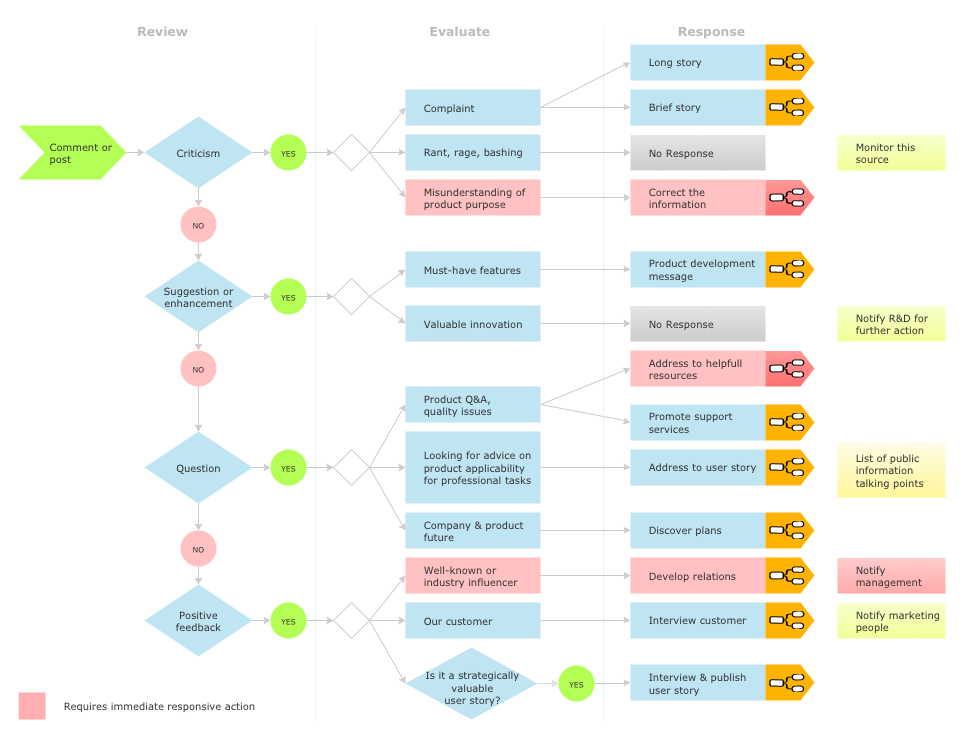 In software engineering, it is important to understand how the system would cooperate with external sources, like data sources. To give this information a visual representation, data flow diagrams (DFD) were used for years. The entire system is usually divided into smaller ones, and all of them process data flows in appropriate ways. The visualizing business processes which engages the data transfer, is commonly preformed using DFDs (data flow diagrams). DFD is used to show the data flow processing and transformation. This DFD represents the electronic system of a customer purchase. It was created using Gane/Sarson notation. Data flow diagrams helps you to sort through and clarify transferring process making it available for analysis, and representation. ConceptDraw DFD solution introduces the vector library, containing the full set of icons from DFD notations. 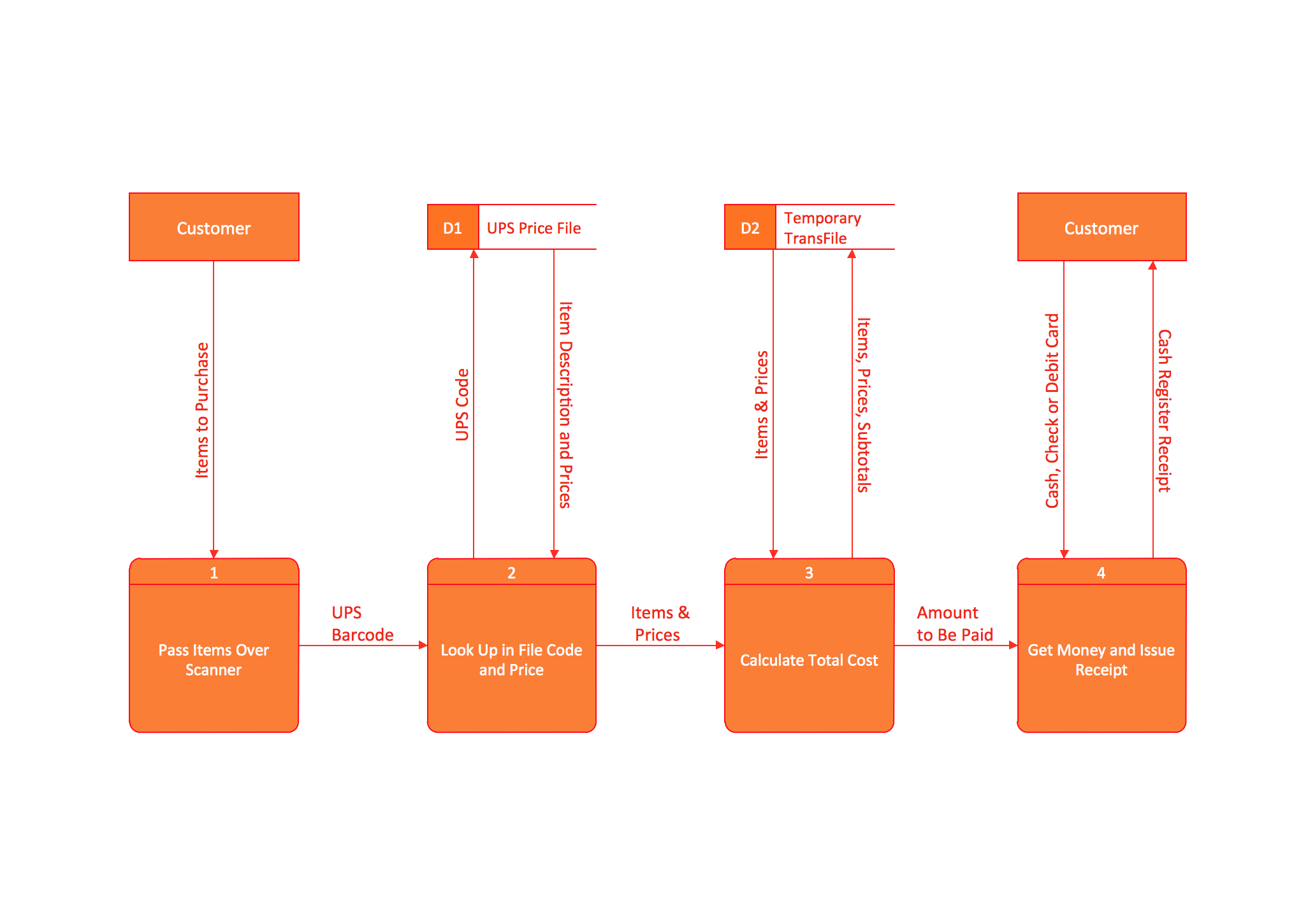 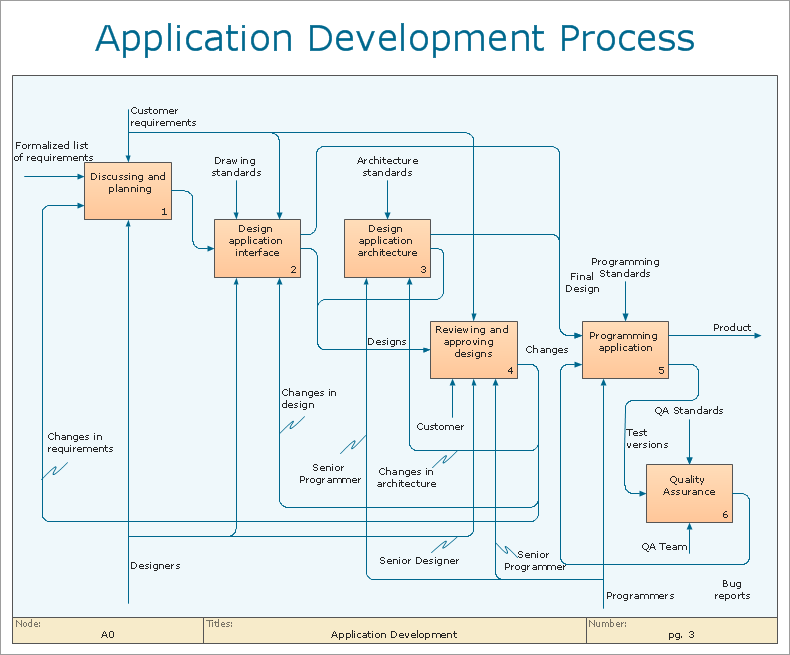 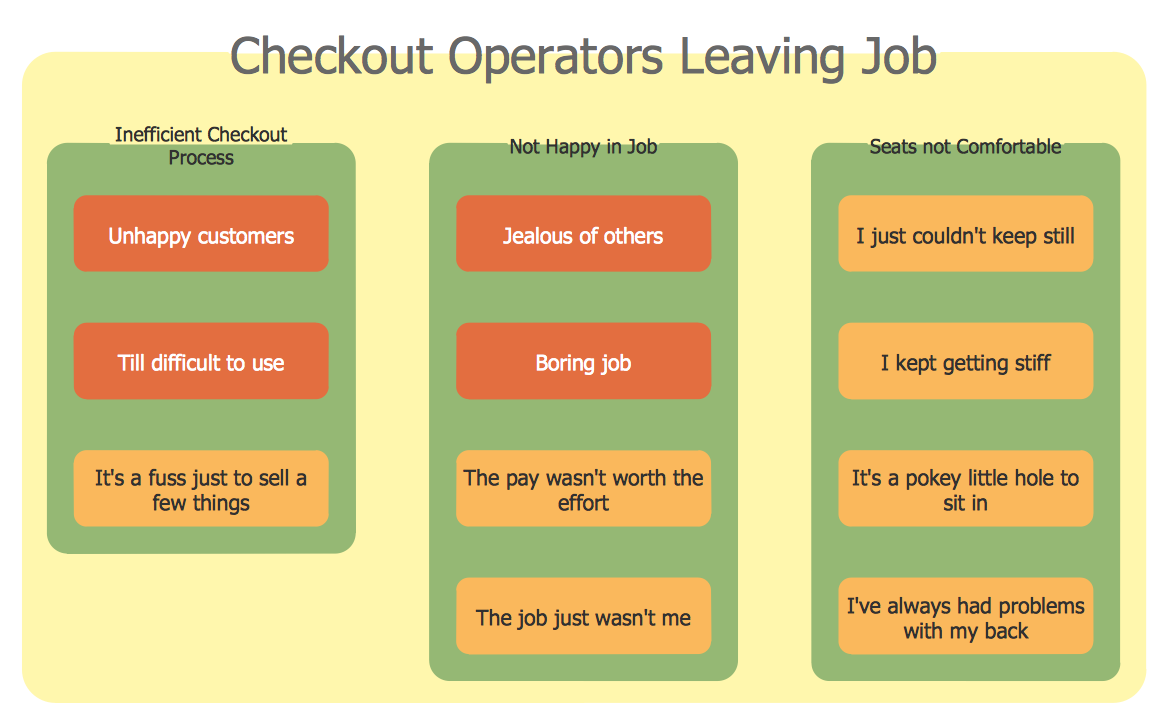 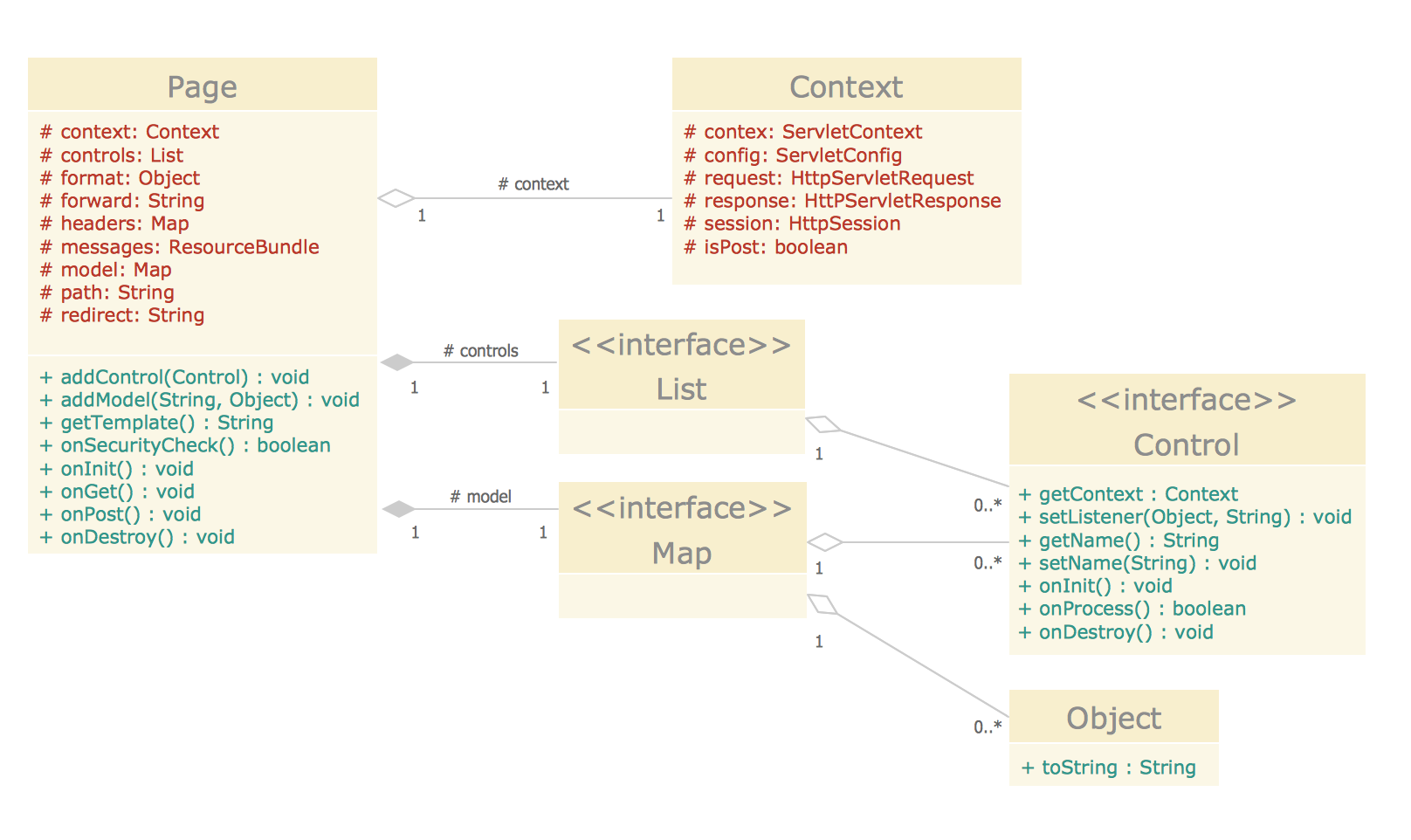