Apart from a well-known quality management, there is also such term as a Total quality management that consists of some particular organization-wide efforts that are taken in order to install and to make permanent some definite climate in which an organization can continuously improve its ability to deliver only high-quality products/services to its customers.

Thus, once the design team develops all the needed drawings with the help of ConceptDraw DIAGRAM diagramming and drawing software having all the needed technical specifications in order to represent the future product, it sends it to the manufacturing plant so it can be executed. Solving process/product fit problems is known to be a task of a high priority in information communication design. The reason for it is the following: 90% of all the development effort must be scrapped in case there are any changes that are being made after the release to manufacturing. 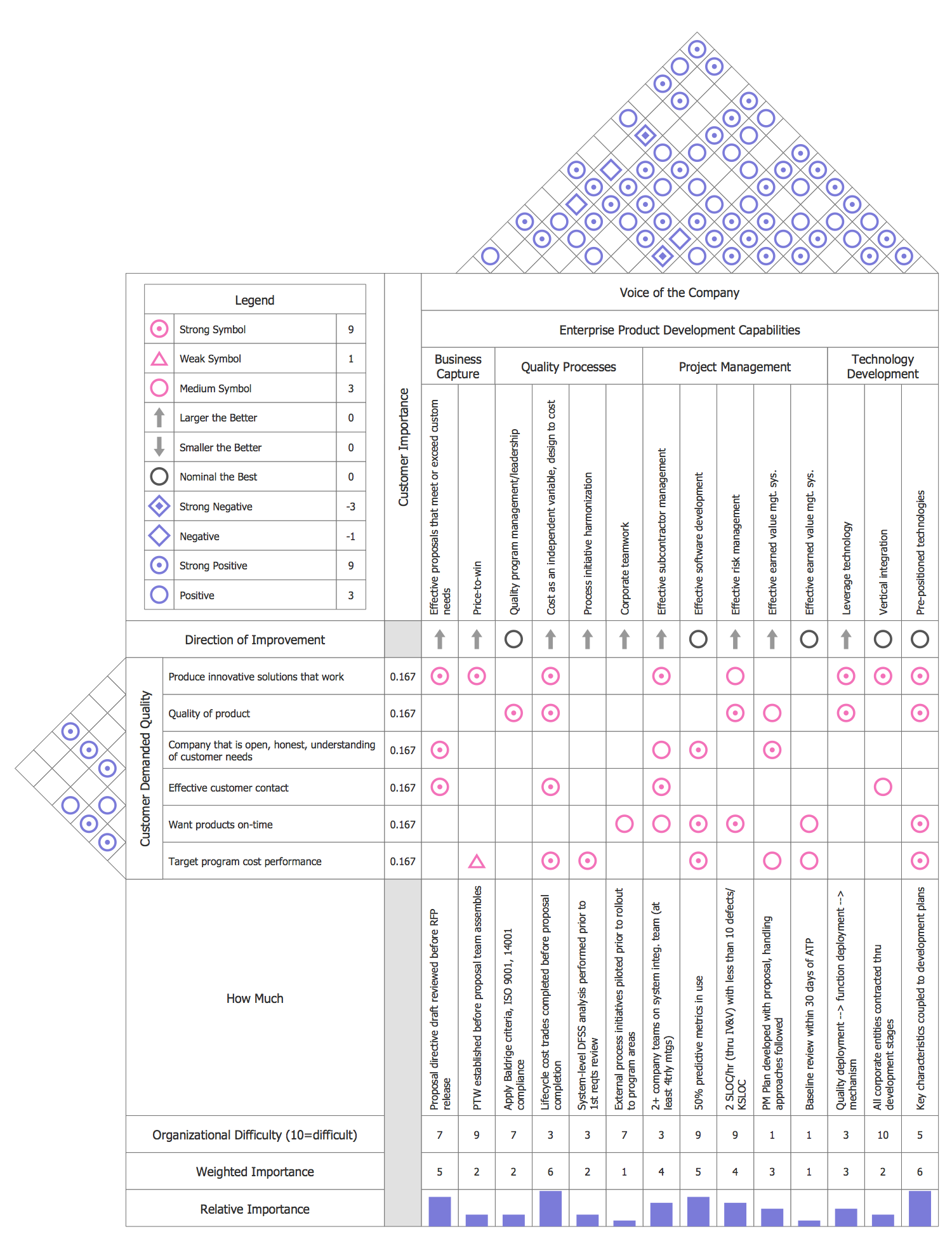 All the conceptual models are known for being designed in terms of facilitating some smooth processes. The concept which is adopted by IDEO that is known to be one of the best and most successful consulting and design firm is one of the most researched processes regarding the new products’ development. It is a five-step procedure and the mentioned steps can be listed in a particular order, such as the following:

Both the market and the clients, as well as the technology, have to be taken into consideration, same as the limitations of the problems; synthesizing the information that was previously collected at the first step is another important stage; visualizing the new customers by using the needed products is what the next phase is; prototyping, evaluating and improving the concept is the pre-last actions and implementing the design changes which can be associated with other, more technologically advanced procedures is the last step which is known for requiring more time that each of the previous ones.

There are known to be many well-developed models that the companies still use nowadays, such as the NPD process that involves the Booz, Allen and Hamilton Model which was published in 1982. This model is known to be the best-known one as it underlies the particular NPD systems. The BAH model is popular for representing the foundation of all the other models that have been developed after it.

The was lots of work that has been conducted for proposing some better models, but such models can be still linked to the previously described BAH (Booz, Allen and Hamilton) model. The seven steps of such Booz, Allen and Hamilton model are new product strategy, screening, evaluation, idea generation, business analysis, development, commercialization and testing.

The was another model called as the Stage-Gate one, developed in the 1980s. It was proposed as one of the new tools used for managing the new products development processes. It was most of all applied to the consumers’ goods industry being used for managing the new products, from a scratch (an idea) to their launch. Those companies that adopt such system can be reported for receiving the benefits such as shorter cycle time, improved teamwork, improved success rates, a better launch, earlier detection of failure and other.

Product strategy as one of the seven steps of the Booz, Allen and Hamilton model can be defined as the road map of a product. Such road map is known for outlining the end-to-end vision of the product, achieving the needed product strategy as well as the picture context in order to achieve what the product should become.

Companies can utilize the needed product strategy in both strategic planning and marketing-related processes in order to identify the right direction of the company's activities. Once the product strategy is chosen, it is known to be composed of different sequential processes which have to be performed for the vision so it can be achieved in an effective way.

Any company is expected to be clear about the target market of some particular product so it becomes easier to plan the activities that are needed for reaching the destination as well as for achieving the goals. Thus, apart from the total quality management, the other aspects have to be taken into account, such as the technology used for planning, producing and other processes.

There are a few goals of any product road map, that can be defining the vision that can provide the big picture of what the company can achieve. In case there is no vision, it can be very difficult for all the stakeholders to understand the direction of the company as a whole.

Product strategy is another goal of a product road map that can be achieved once the elements of the product are outlined. Also, the product road map can explain how it can be done. There is also the so-called “big picture context” that provides the background of each of the features leading to the more clear understanding of how it relates to the larger goals, including the details in which some particular features can be built as well as advising in what order they would better get built. 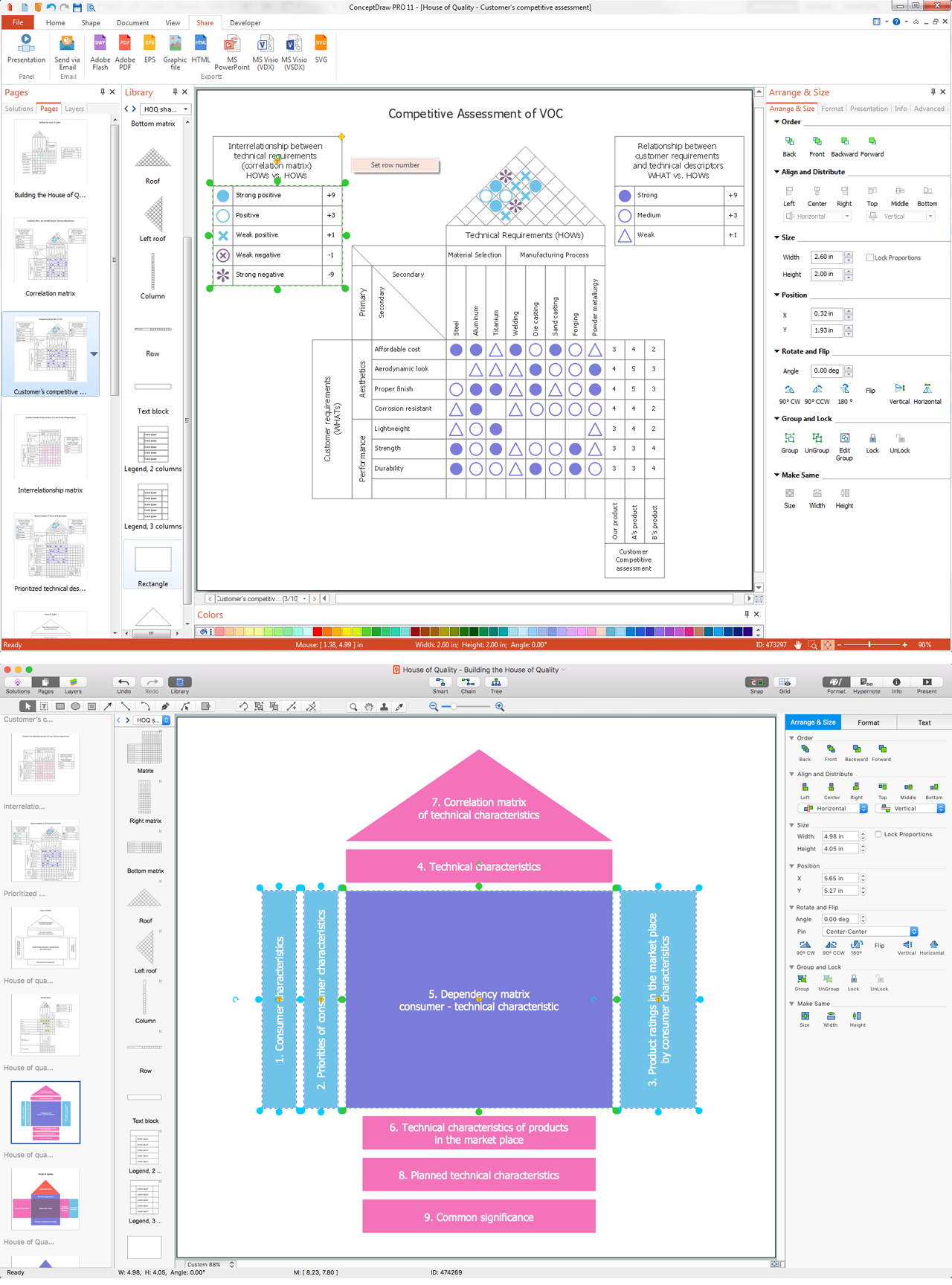 The initiatives are what the high-level efforts can be called, helping you achieve your goals. In case you decide to take an initiative into your hands and download the ConceptDraw DIAGRAM diagramming and drawing software from the site, same as the ConceptDraw STORE one, you will get a chance to install the House of Quality solution from the last mentioned product of CS Odessa, using it for making the great looking HOQ drawings, such as the diagrams and matrices within the total quality management as one of the most popular fields of business activity.

By filling in this template, it is easy to quickly prepare a presentation about any quality process in your company. 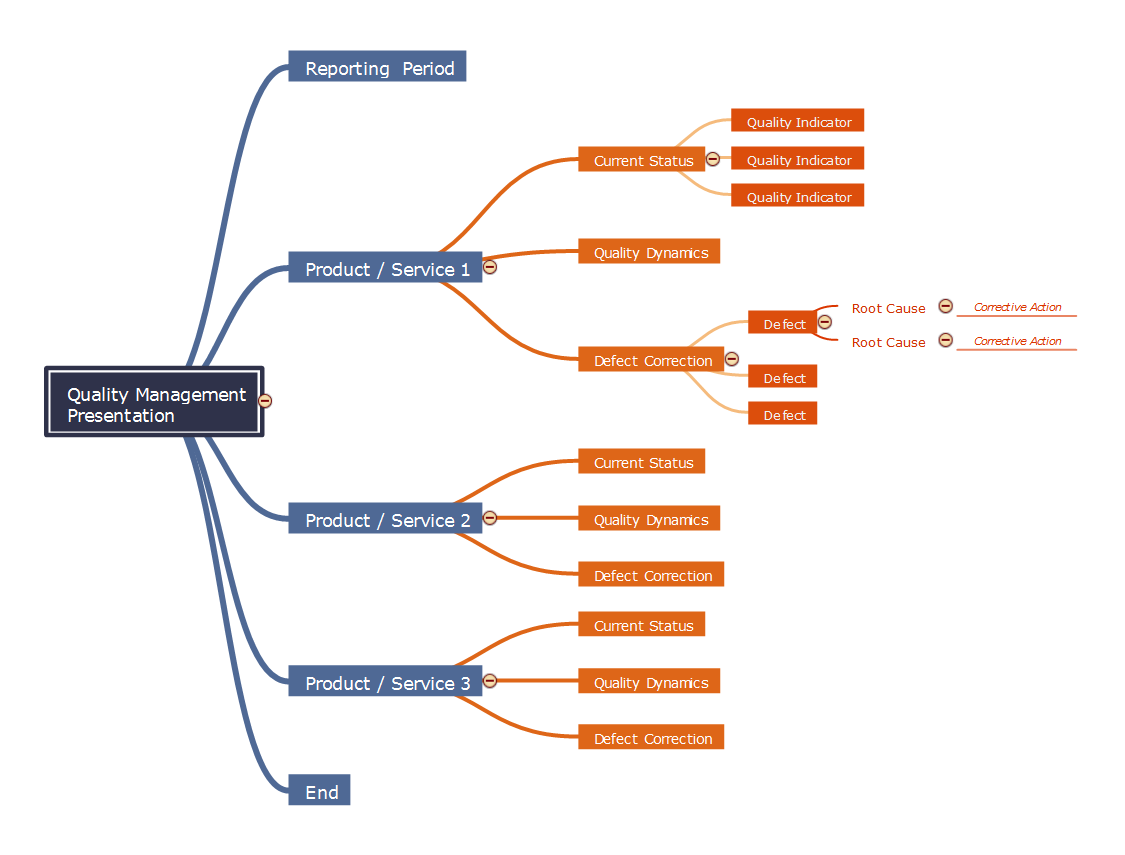