"The ski jumping competition of the Vancouver 2010 Olympics was held at Whistler Olympic Park between 12 and 22 February 2010. ...
For the three events, there are a maximum 70 athletes allowed to compete. No nation can have more than five skiers. For each event, a nation can enter four skiers in individual event or one team in the team event.
Host nation Canada is expected to enter skiers in all events. If no skier meets the qualification standards, they can enter one skier per event.
Quota allocation per nation is based on the World Ranking List (WRL) consisting of Ski Jumping World Cup and Grand Prix points, followed by Continental Cup Standings from the 2008-09 and 2009-10 Ski Jumping World Cup. This will be made by assigning one quota slot per skier from the top of the standings downwards until the maximum five slots have been reached, including host nation Canada." [Ski jumping at the 2010 Winter Olympics. Wikipedia]
This medal table example "Ski jumping at the 2010 Winter Olympics" is created using the ConceptDraw PRO diagramming and vector drawing software extended with the Winter Sports solution.
The Winter Sports solution from the Sport area of ConceptDraw Solution Park contains the vector stencils library "Winter sports pictograms" and examples of diagrams and infographics.
Medal table 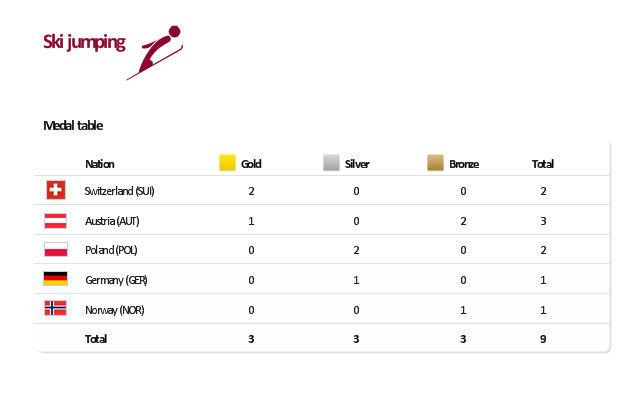