UML or Unified Modelling Language can be at any time applied in different spheres of business activity, such as finance, internet technologies, banking, healthcare, aerospace and other business activities. This language is an accepted standard and this standard can be used for modelling any needed system. There are lots of notations you can use for making any needed UML diagrams. These notations can be made for visual representation of any needed subsystems, requirements, physical and logical elements, behavioural and structural patterns, as they are especially relevant to the systems built during using a so-called “object-oriented” style.

The Unified Modelling Language (UML) is a standardized and general-purpose language and it is very popular and quite widely used, especially in the field of software engineering in IT. This Unified Modelling Language includes a set of some graphic notation techniques for creating the visual models of object-oriented software-intensive systems. There are thirteen types of such UML diagrams and you can always create any of them in ConceptDraw DIAGRAM software. These types of UML diagrams are: “package” (or “class”), “collaboration”, “object”, “use case”, “sequence”, “component”, “activity”, “deployment” “state machine”, “timing”, “interaction overview” and “composite structure” UML diagrams. Each of the types of Unified Modelling Language will be described later in this article.

“Rapid UML” solution enables you to make any of the Unified Modelling Language diagrams, using so many different examples and templates from this solution for simplifying ConceptDraw DIAGRAM users' work of creating similar great looking diagrams. 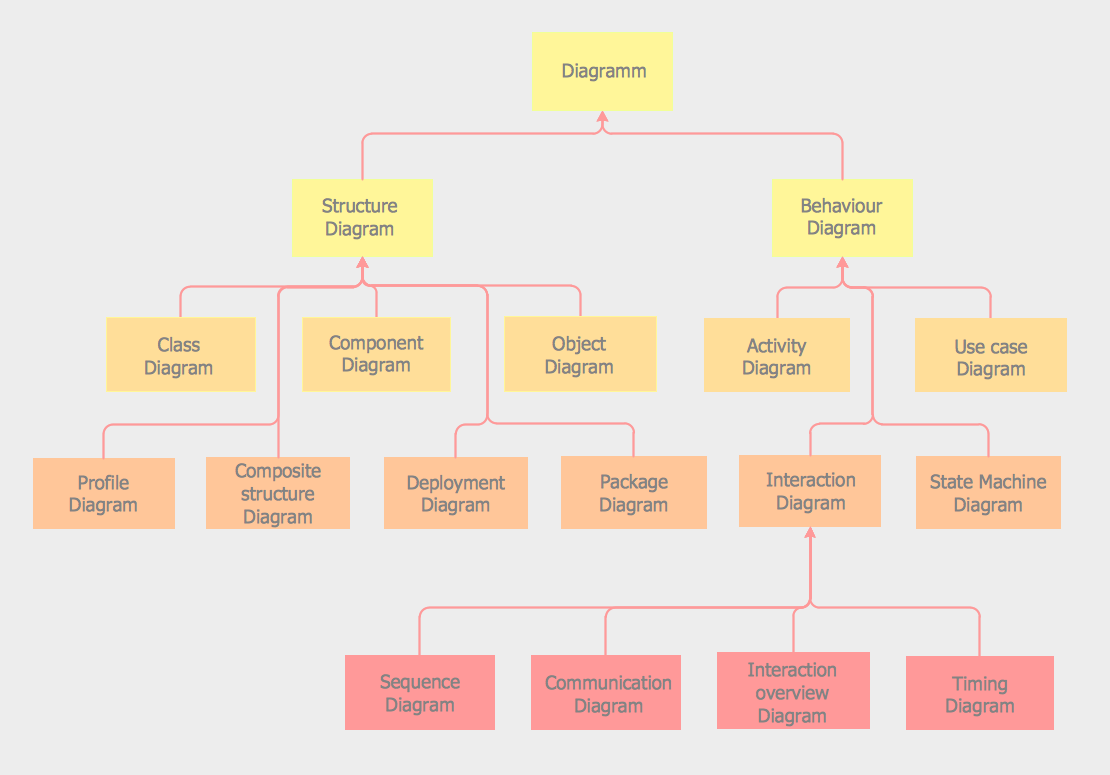 Use these UML diagram templates and examples to quickly start drawing your own UML diagrams.

UML Package Diagram illustrates the functionality of a software system.

UML Communication Diagram depicts the interactions between objects or parts in terms of sequenced messages and describes both the static structure and dynamic behavior of a system.

UML state machine's goal is to overcome the main limitations of traditional finite-state machines while retaining their main benefits.

UML Timing Diagram as special form of a sequence diagram are used to explore the behaviors of objects throughout a given period of time.

Class Diagrams describes the structure of a system by showing the system's classes, their attributes, and the relationships among the classes

UML Object Diagram shows the structure of a modeled system at a specific time.

UML Interaction Overview Diagram schematically shows a control flow with nodes and a sequence of activities that can contain interaction or sequence diagrams.

Use Case Diagrams describes the functionality provided by a system in terms of actors, their goals represented as use cases, and any dependencies among those use cases.

Sequence Diagrams shows how objects communicate with each other in terms of a sequence of messages. Also indicates the lifespans of objects relative to those messages.

Activity diagram describes the business and operational step-by-step workflows of components in a system. An activity diagram shows the overall flow of control.

UML Component Diagram illustrate how components are wired together to larger components and software systems that shows the structure of arbitrarily complex systems.

Deployment diagram describes the hardware used in system implementations and the execution environments and artifacts deployed on the hardware.