"Emergency evacuation is the immediate and urgent movement of people away from the threat or actual occurrence of a hazard. Examples range from the small scale evacuation of a building due to a storm or fire to the large scale evacuation of a district because of a flood, bombardment or approaching weather system. In situations involving hazardous materials or possible contamination, evacuees may be decontaminated prior to being transported out of the contaminated area. ...
Planning.
Emergency evacuation plans are developed to ensure the safest and most efficient evacuation time of all expected residents of a structure, city, or region. A benchmark "evacuation time" for different hazards and conditions is established. These benchmarks can be established through using best practices, regulations, or using simulations, such as modeling the flow of people in a building, to determine the benchmark. Proper planning will use multiple exits, contra-flow lanes, and special technologies to ensure full, fast and complete evacuation. Consideration for personal situations which may affect an individual's ability to evacuate is taken into account, including alarm signals that use both aural and visual alerts, and also evacuation equipment such as sleds, pads, and chairs for non-ambulatory people. Regulations such as building codes can be used to reduce the possibility of panic by allowing individuals to process the need to self-evacuate without causing alarm. Proper planning will implement an all-hazards approach so that plans can be reused for multiple hazards that could exist." [Emergency evacuation. Wikipedia]
The evacuation plan example was created using the ConceptDraw PRO diagramming and vector drawing software extended with the Fire and Emergency Plans solution from the Building Plans area of ConceptDraw Solution Park.
www.conceptdraw.com/ solution-park/ building-fire-emergency-plans
Evacuation plan 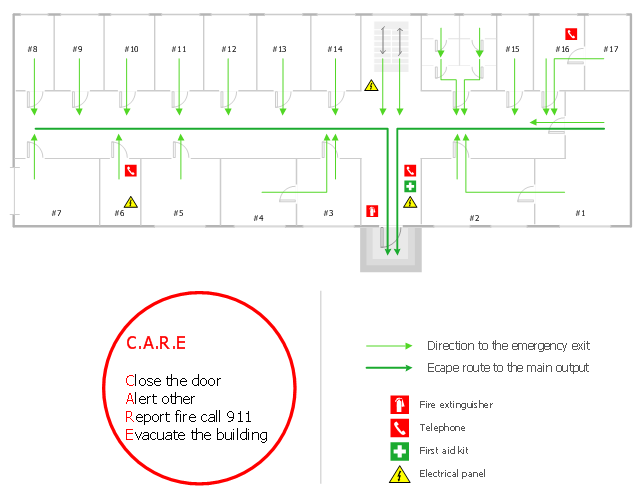 This value stream map example was redesigned from the Wikipedia file: ValueStreamMapParts.png.
[en.wikipedia.org/ wiki/ File:ValueStreamMapParts.png]
This file is licensed under the Creative Commons Attribution-Share Alike 3.0 Unported license. [creativecommons.org/ licenses/ by-sa/ 3.0/ deed.en]
"Value stream mapping (VSM) refers to the activity of developing a visual representation of the flow of processes, from start to finish, involved in delivering a desired outcome, service, or product (a “value stream”) that is valued by customers. In the context of government, a value stream could be the process of conducting an audit, completing a procurement, or hiring new agency staff. VSM can increase understanding of actual decision-making processes and identify sources of non-value-added time (e.g., documents waiting to be reviewed). The typical products of a 2-5 day VSM workshop are a map of the “current state” of targeted processes and a “future state” map of the desired process flow and an associated implementation plan for future process improvement activities." [en.wikibooks.org/ wiki/ Business_ Analysis_ Guidebook/ LEAN]
The VSM diagram example "Value stream map parts" was created using the ConceptDraw PRO diagramming and vector drawing software extended with the Value Stream Mapping solution from the Quality area of ConceptDraw Solution Park.
www.conceptdraw.com/ solution-park/ business-value-stream-mapping
Value stream map parts 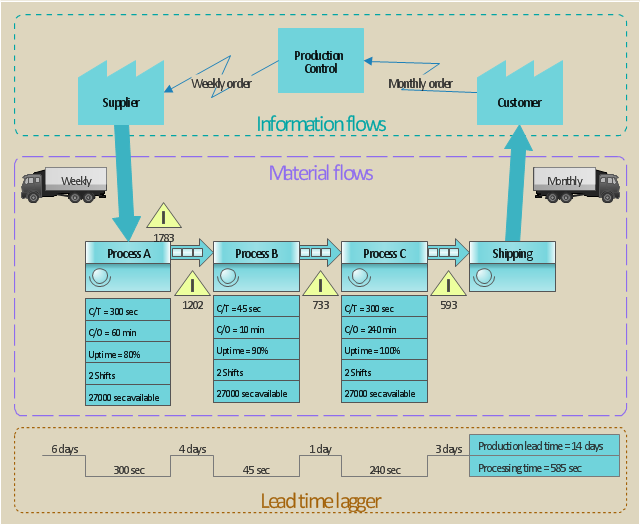