"Orion is a prominent constellation located on the celestial equator and visible throughout the world. It is one of the most conspicuous and recognizable constellations in the night sky. It was named after Orion, a hunter in Greek mythology. Its brightest stars are Rigel (Beta Orionis) and Betelgeuse (Alpha Orionis), a blue-white and a red supergiant respectively. Many of the other brighter stars in the constellation are hot, blue supergiant stars. The three stars in the middle of the constellation form an asterism known as Orion's belt. The Orion Nebula is located south of Orion's belt." [Orion (constellation). Wikipedia]
This example was redesigned from the Wikimedia Commons file: Orion network.jpg. [commons.wikimedia.org/ wiki/ File:Orion_ network.jpg]
This file is made available under the Creative Commons CC0 1.0 Universal Public Domain Dedication. [creativecommons.org/ publicdomain/ zero/ 1.0/ deed.en]
The astronomical diagram example "Orion network" was created using the ConceptDraw PRO diagramming and vector drawing software extended with the Astronomy solution from the Science and Education area of ConceptDraw Solution Park.
Orion network 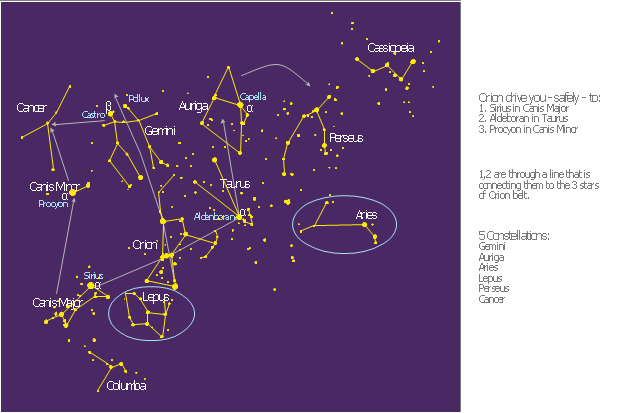