The vector clipart library Buildings and green spaces contains images of buildings, trees and lawns. Use it to design your own illustrations, diagrams and infographics using the ConceptDraw PRO diagramming and vector drawing software.
"Residential buildings are called houses or homes, though buildings containing large numbers of separate dwelling units are often called apartment buildings or apartment blocks to differentiate them from 'individual' houses. Houses may also be built in pairs (semi-detached), in terraces where all but two of the houses have others either side; apartments may be built round courtyards or as rectangular blocks surrounded by a piece of ground of varying sizes. Houses which were built as a single dwelling may later be divided into apartments or bedsitters; they may also be converted to another use e.g. an office or a shop. Building types may range from one-room wood-framed, masonry, or adobe dwellings to multi-million dollar high-rise buildings able to house thousands of people. A Multi-Storey is a building that has multiple floors above ground in the building." [Building. Wikipedia]
The exampe "Design elements - Buildings and green spaces" is included in the Artwork solution from the Illustration area of ConceptDraw Solution Park.
Vector clip art 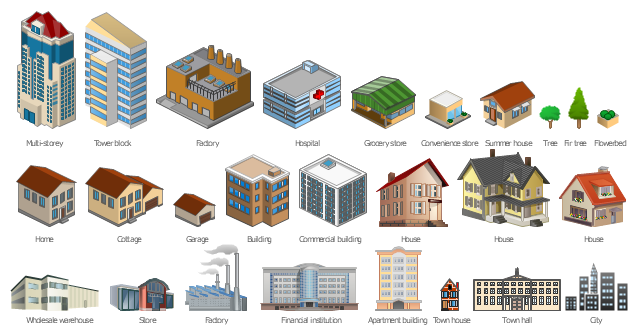 This plumbing and piping plan sample depicts the house hot and cold water supply and sanitation system.
"Within industry, piping is a system of pipes used to convey fluids (liquids and gases) from one location to another. The engineering discipline of piping design studies the efficient transport of fluid. ...
Plumbing is a piping system with which most people are familiar, as it constitutes the form of fluid transportation that is used to provide potable water and fuels to their homes and businesses. Plumbing pipes also remove waste in the form of sewage, and allow venting of sewage gases to the outdoors. Fire sprinkler systems also use piping, and may transport nonpotable or potable water, or other fire-suppression fluids." [Piping. Wikipedia]
The water supply and waste removal system scheme example "House plumbing plan" was created using the ConceptDraw PRO diagramming and vector drawing software extended with the Plumbing and Piping Plans solution from the Building Plans area of ConceptDraw Solution Park.
Plumbing and piping plan 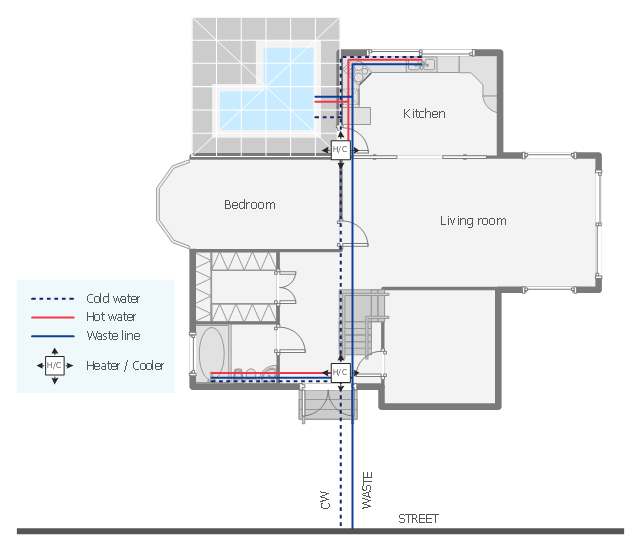