This donut chart example shows the citizens and taxpayers of New Hampshire how the State of New Hampshire spends their money they pay for their government. It depicts how the New Hampshire's FY2014 Authorized Budget as enacted is allocated to the six categories of government.
The doughnut chart example "Budgeted appropriations" was designed on the base of the graph from the official website of New Hampshire government. [www.nh.gov/ transparentnh/ where-the-money-goes/ ].
"Authorization and appropriations.
In general, funds for federal government programs must be authorized by an "authorizing committee" through enactment of legislation. Then, through subsequent acts by Congress, budget authority is then appropriated by the Appropriations Committee of the House. In principle, committees with jurisdiction to authorize programs make policy decisions, while the Appropriations Committees decide on funding levels, limited to a program's authorized funding level, though the amount may be any amount less than the limit.
The budget resolutions specify funding levels for the House and Senate Appropriations Committees and their 12 subcommittees, establishing various budget totals, allocations, entitlements, and may include reconciliation instructions to designated House or Senate committees. The appropriations committees, starting with allocations in the budget resolution, draft appropriations bills, which may be considered in the House after May 15. Once appropriations committees pass their bills, they are considered by the House and Senate. When there is a final budget, the spending available to each appropriations committee for the coming fiscal year is usually provided in the joint explanatory statement included in the conference report. The appropriations committees then allocate that amount among their respective subcommittees, each to allocate the funds they control among the programs within their jurisdiction." [United States budget process. Wikipedia]
The donut chart example "Budgeted appropriations" is created using the ConceptDraw PRO diagramming and vector drawing software extended with the Pie Charts solution of the Graphs and Charts area in ConceptDraw Solution Park.
Donut chart 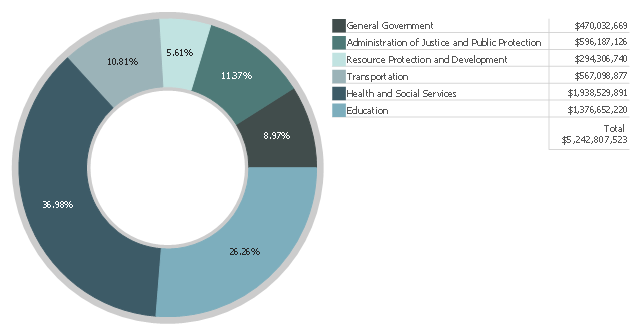