This electrical drawing sample shows video and audio equipment layout on the cinema seating plan.
"Digital cinema refers to the use of digital technology to distribute or project motion pictures as opposed to the historical use of motion picture film. A movie can be distributed via hard drives, the Internet, dedicated satellite links or optical disks such as DVDs and Blu-ray Discs. Digital movies are projected using a digital projector instead of a conventional film projector. Digital cinema is distinct from high-definition television and is not dependent on using television or high-definition video standards, aspect ratios, or frame rates. In digital cinema, resolutions are represented by the horizontal pixel count, usually 2K (2048×1080 or 2.2 megapixels) or 4K (4096×2160 or 8.8 megapixels)." [Digital cinema. Wikipedia]
The electrical floor plan example "Cinema video and audio equipment layout" was created using the ConceptDraw PRO diagramming and vector drawing software extended with the Electric and Telecom Plans solution from the Building plans area of ConceptDraw Solution Park.
Electrical floor plan 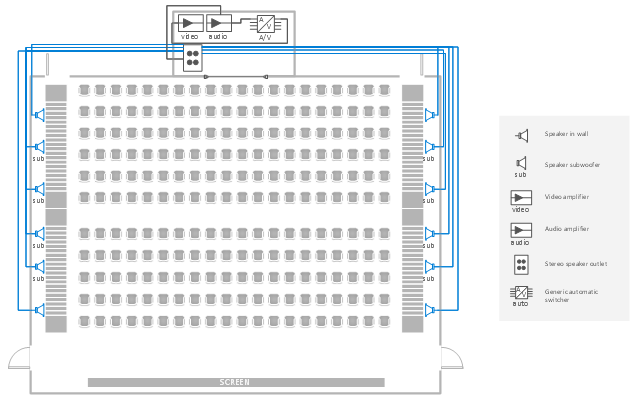